Several posts back I wrote that I was going to start mixing the dogs' food half Eukanuba and half grain free (Nature's Recipe brand).  But I realized fairly quickly that all dogs except Bentley were gaining a little weight.  I really wanted him to gain weight, he looks scrawny especially in the ring with these big standard guys.  Go figure, right?  So I decreased the amount of the grain free back so it is about a third of the food.  So far the weight gain is the only difference I can see in the dogs since they've been on this mixture.  I'm going to keep them on it for a while, just to see.
My suspicions about the weight gain were confirmed when I checked the dogs in to board last weekend.  Sawyer had jumped up to 15.4 pounds!  He is not over weight and he looks good but I know to keep an eye on him.  I'm sure once the weather gets hot he will sweat off some of the weight, too. 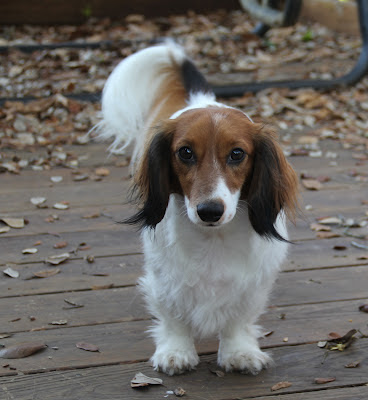 Sawyer doesn't mind having a bath, tolerates having ears cleaned and his nails trimmed, but he hates to be combed.  He will actually run and hide when he sees me combing the other dogs.  He is just a rough and tough boy who wants adventure and action and none of that getting fancied up stuff!
Posted by Beth at 9:01 PM