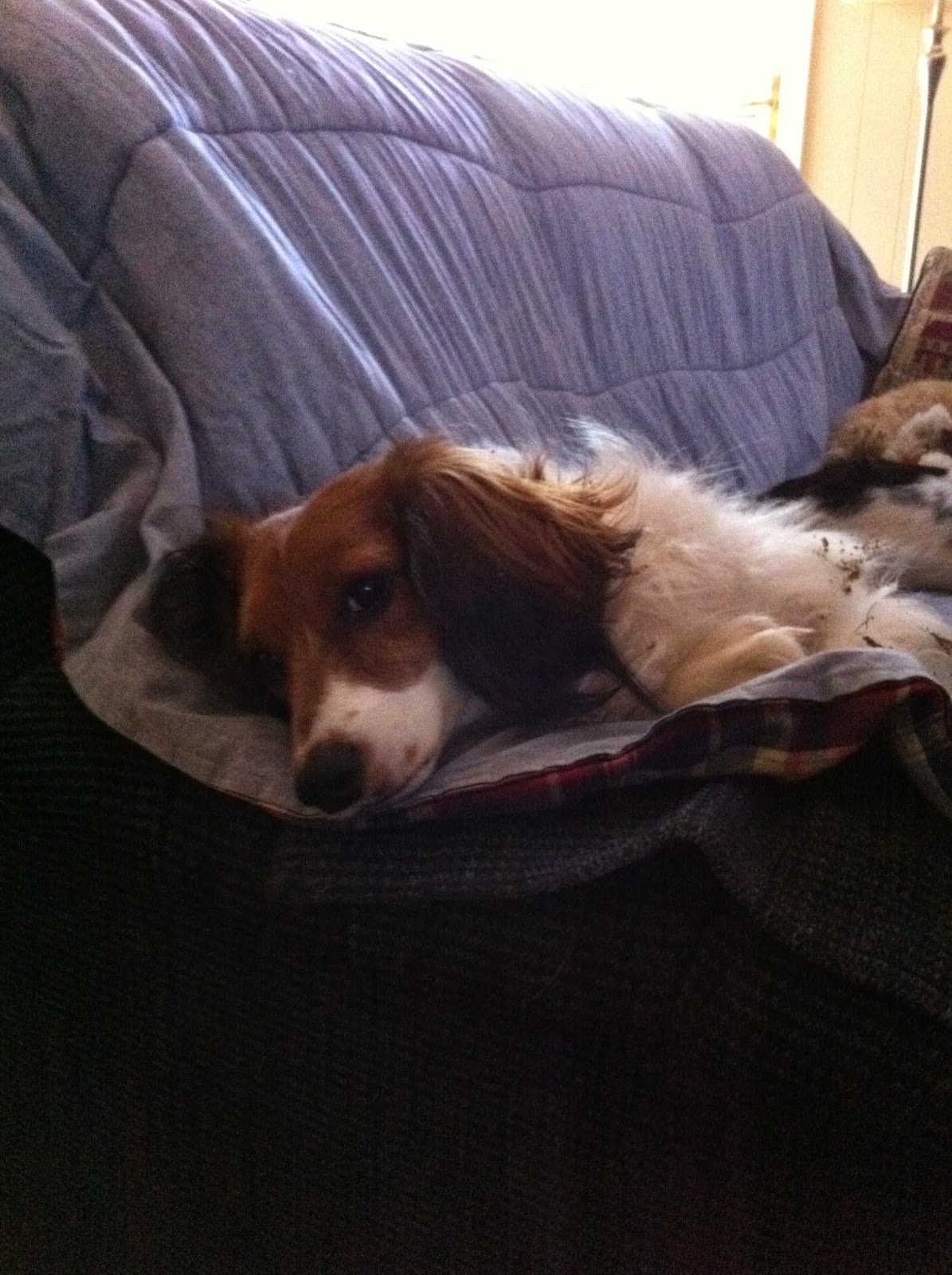 Had to get this with the not so great iphone camera, but the message is still there.  This boy knows how to be a sofa sleeper! (and, yes, that is the nasty oak pollen stuck in his fur!)
Posted by Beth at 12:02 PM No comments:

There's something wrong here...or is there?

Why am I standing here, under the overhang of the house, in the dark, at 10 o'clock at night?

Because it is lightly raining and the only way I can get the dogs outside to take care of their doggie business is to go outside with them.  So, here I stand.

But, that's okay.  It is peaceful to stand here in the silence of the night and hear the light drip, drip, drip of the rain dripping off the roof and the trees. How different my life was before I had these little ones, I missed out on moments like this.
Posted by Beth at 10:39 PM No comments:

The first full weekend of every April the Starving Artists Show is held downtown on the grounds of historic La Villita. I love our downtown and I love this delightful show that features local artists and artisans.  It is fun to stroll through the little village and shop for treasures.  Today after church I decided that even though it was misting and drizzling a bit that I would head down there for a little while.  Family members were busy elsewhere, so it was just going to be me.  Then I decided to put the doggie stroller in the car and take Baylee.  But that was not to be.  I don't know how he knew what was happening, but as I put up the doggie gate I realized that Sawyer was standing by the door into the garage and was whining very softly.  Looking at me with those sweet loving eyes, wagging his tail.  I knew he had to go instead. 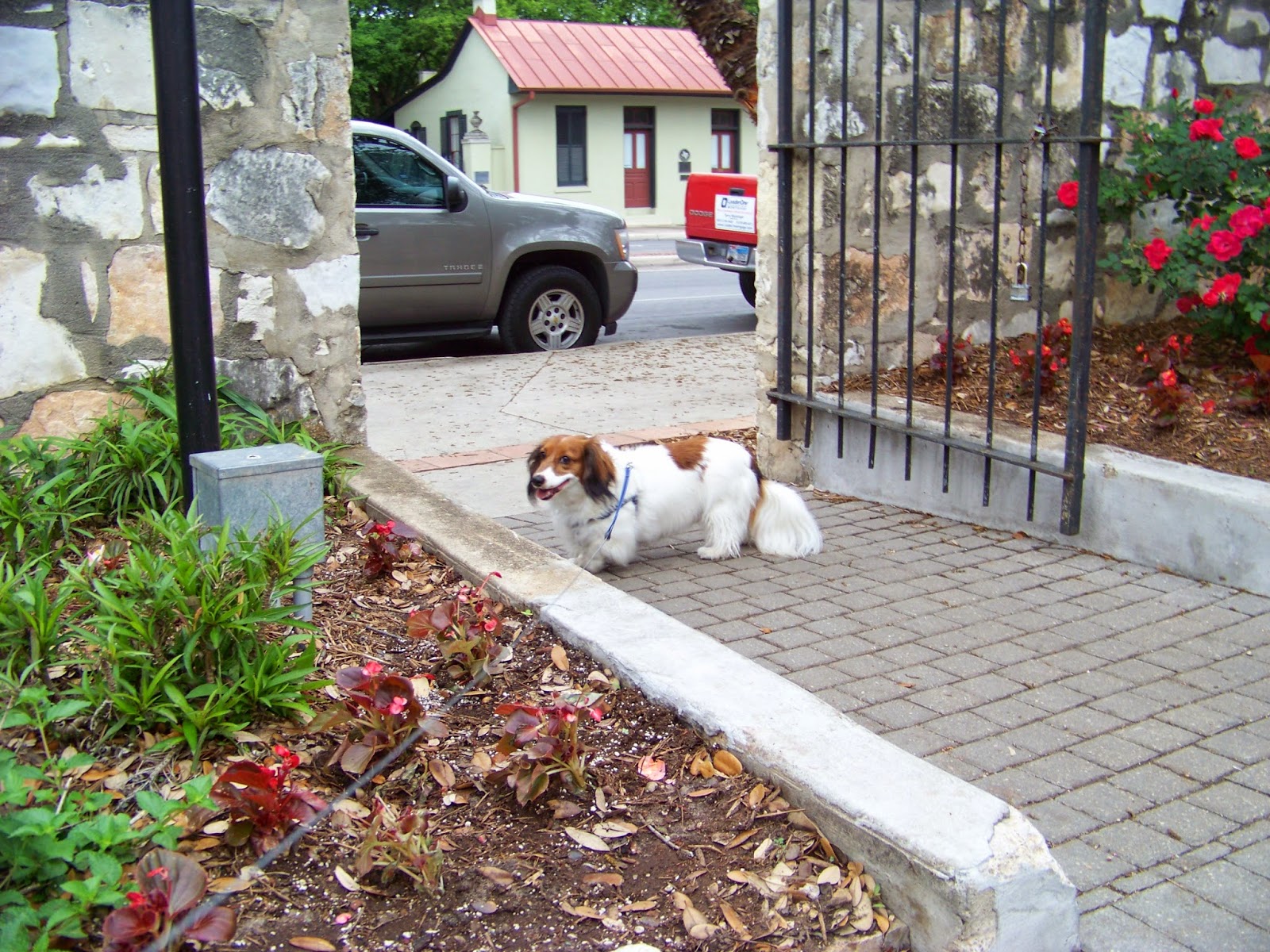 I made today's pictures with my purse camera using basically one hand since the other one was holding the retractable leash with a dog pulling on it!

Sawyer had no problems with the elevator in the parking garage, his first elevator ride.  It wasn't until we were waiting to cross the first street that I realized that this was a very different adventure for him.  He is used to walks in the park or neighborhood or in the State Parks that we've visited.  But Sawyer didn't seem to mind the traffic noise or the different environment.  He just wanted to walk and as soon as the light changed he trotted right across the street!

I did realize how different he is from Bentley.  Bentley is used to shopping at the dog shows and will wait patiently as I look at things.  Sawyer was good, but he was ready to keep moving and I would have to reassure him that we would be soon.  He also kept wanting to walk on either side of me and I would have to turn him around to keep him on my left.

He made many new friends, too.  So many people stopped me to ask what kind of dog he is, his name, and his age.  Several people commented on how good he was with the children (he did lick them and I always warned the adults!).  I think half of the people I talked to either have a dachshund or had one in the past; several commented that they had never seen a long-haired dachshund!  Everyone thought he was beautiful!

﻿
After I finally finished shopping at the show I slipped into the Arneson River Theater for a few minutes.  I loosened the retractable leash and sat down on the top step of the theater.  It was such a peaceful day and the river was not crowded.  I wished that I wasn't wearing boots (it was wet when I left and didn't want to have wet feet) so we could stroll the river walk for a while.  Instead I opted for a few quiet minutes and a little photo shoot. 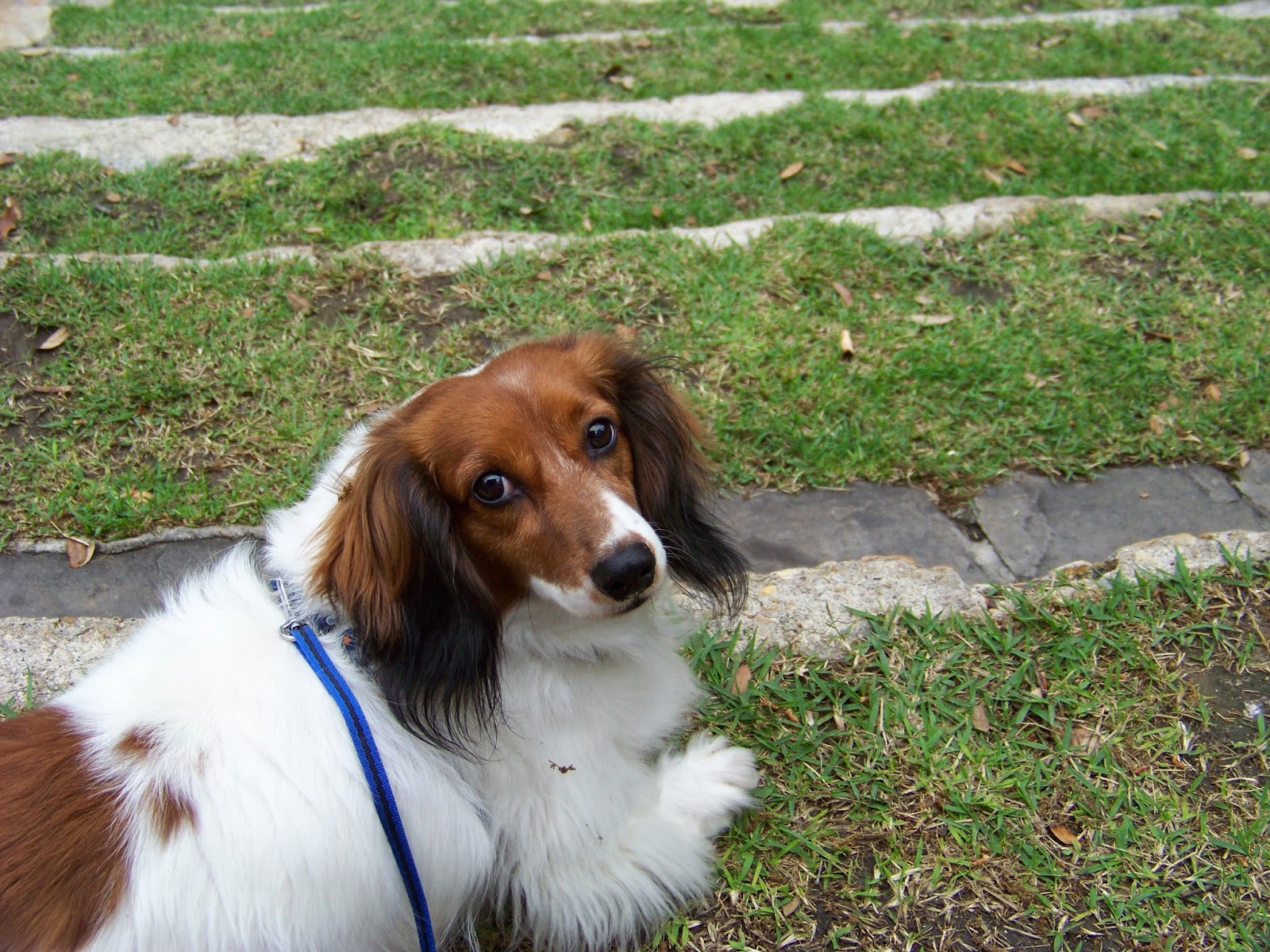 Sawyer's first trip downtown was a success!  He enjoyed himself, even when he had to wait on me to shop!  He got in a lot of socializing, too.  Plus, he was good publicity for dachshunds and for polite doggie behavior in public places!
Posted by Beth at 8:42 PM No comments: