Sawyer (and I) are long over due for an adventure.  I had originally thought we would head out to a State Park, with picnic lunch, and walk the trails over the past weekend.  However, that was not to be.  I just have too many chores at home right now and putting 60 miles on the car every day to commute to work made me reluctant to take a day trip.

So I opted for the next best thing - an in-town adventure at a park.  We are very fortunate to have a city that is full of excellent parks and trails, so why take a road trip when you can make do very well at home?
We headed out mid-morning to a place that I love and Sawyer had never been to before so he would have the experience of an adventure in a new place. The original springs have ceased to flow; this winter lake/summer pool is filled with pumped in water.  But the park is full of history. It is thought that somewhere near these springs that the first Europeans to come into this area camped with friendly natives and named the place San Antonio since it was the feast day of Saint Anthony de Padua.  Today, as in the past, the park is a favorite place to walk, picnic, and enjoy the scenery. 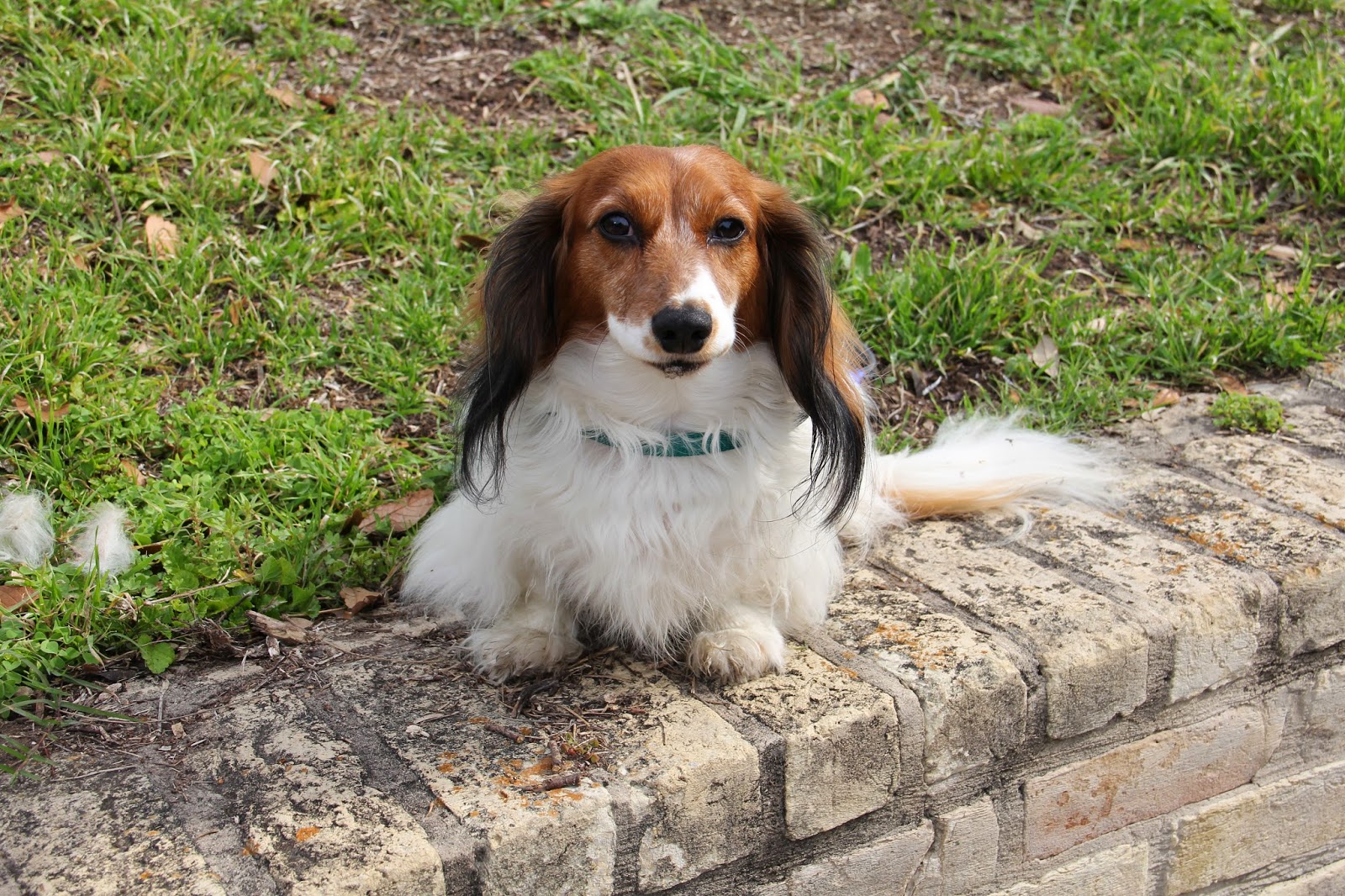 The original adventure dog wasn't too keen on a photo shoot.  He's a mess right now anyway.  He needs a bath and a good grooming.  But that face is my Sawyer! 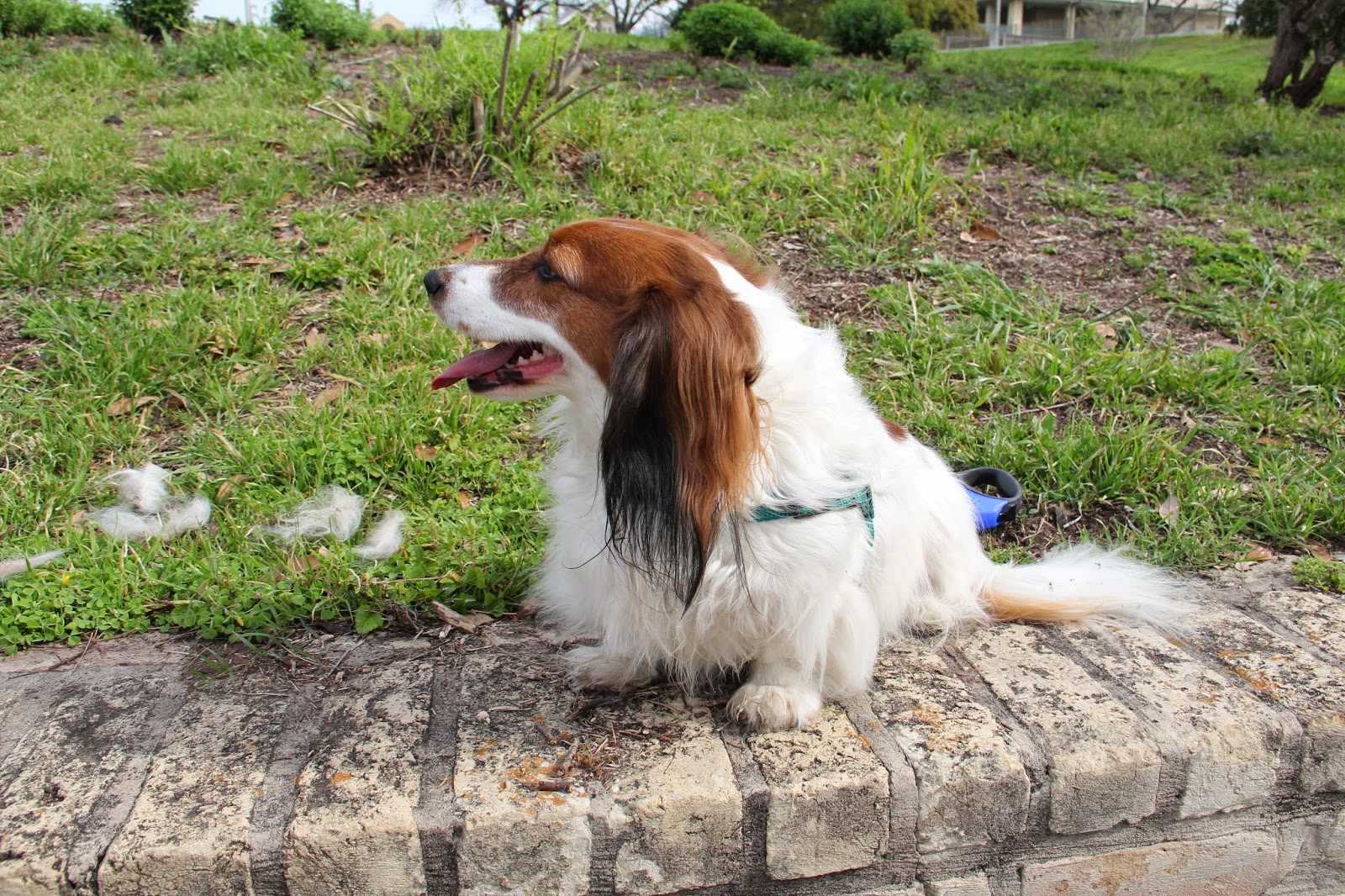 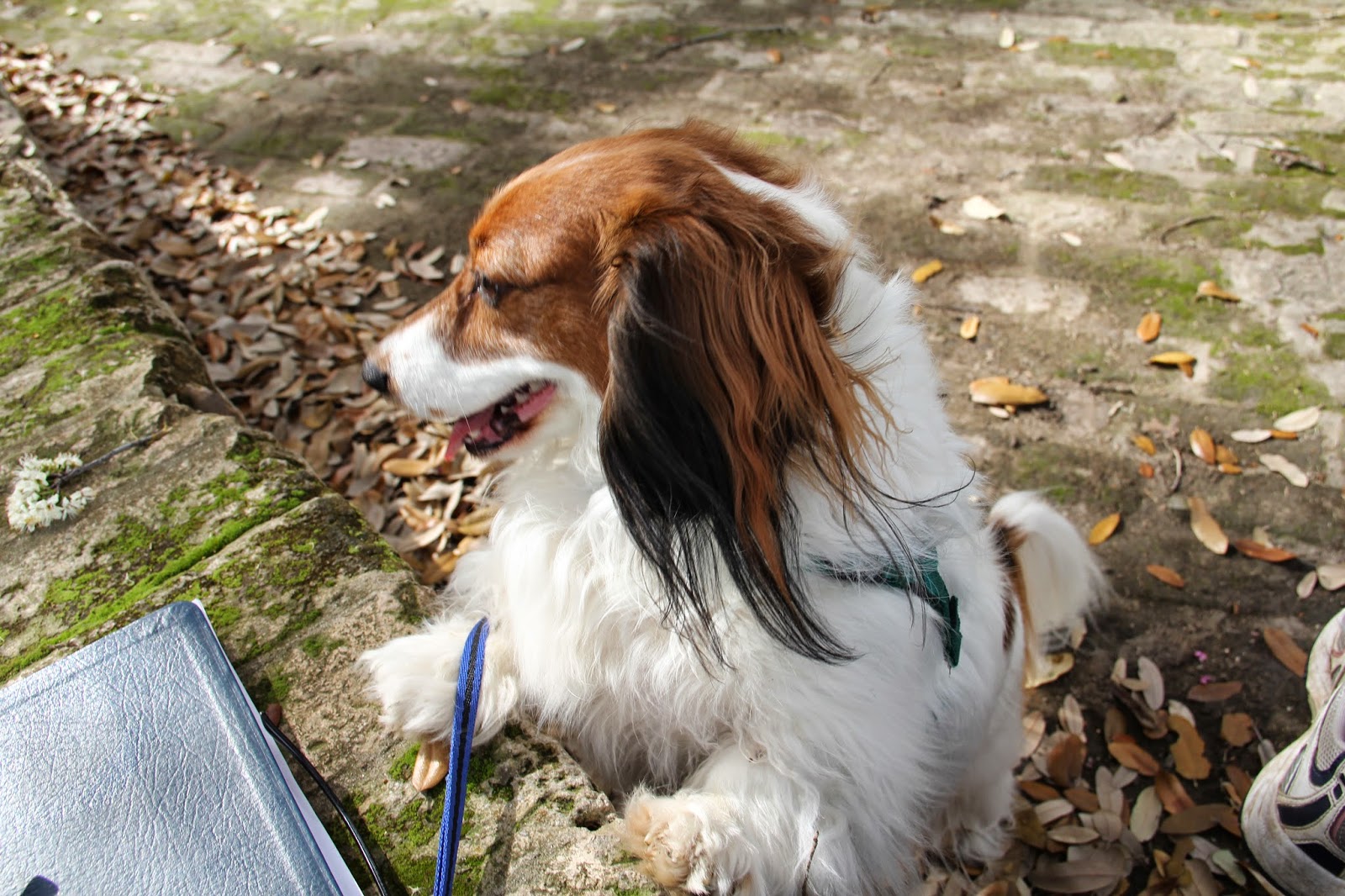 I think his ears are awesome! Blossom's are even longer, but his red/black combination with the long hair is stunning!

I had him on the retractable leash and the park was pretty much empty when we arrived.  We walked around for a while.  I had expected him to run and explore like he does on a trail.  Instead, he was happy to walk along with me for the most part.  He waited patiently whenever I stopped to make a picture.  We stopped by a low wall and I attempted to make pictures.  I stepped back to make the first shot and he jumped off the wall and ran to me!  The wall was about three feet high and I just cringed when I thought about his dachshund back.  Yes, dachshunds have no fear of heights! 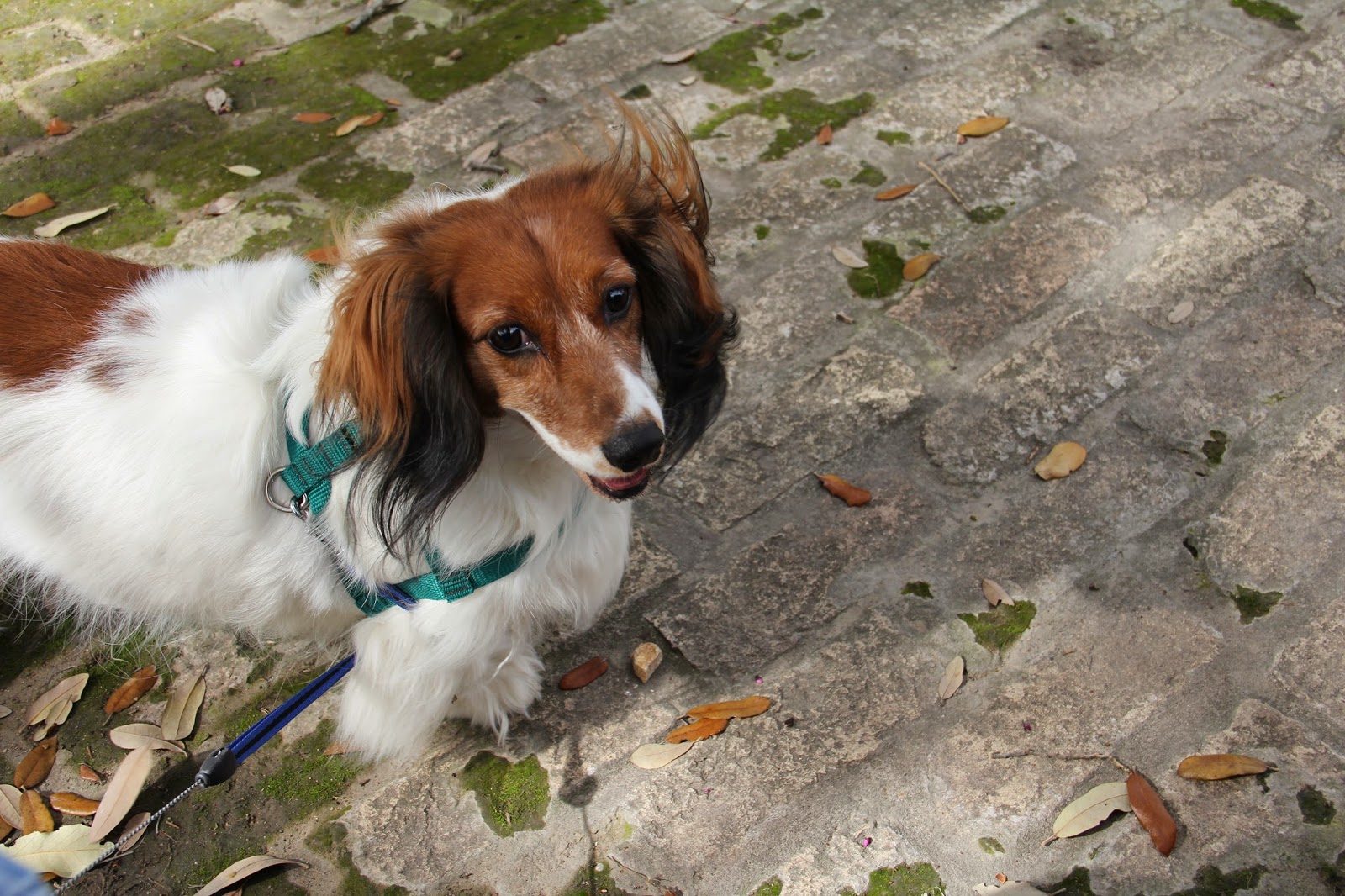 We walked on some more and I found a lower wall to sit on.  I expected him to explore around on the terrace and the grassy area behind me, but he wanted to sit half on and half off my lap.  I sat for quite a while in this place and he was perfectly happy to just lay there and watch everything.  Once someone passed behind us on the sidewalk across the grassy area and he growled to alert me (that's protection for you!). I realized that he was enjoying our one-on-one time and have promised him that we will have more time together, just the two of us. 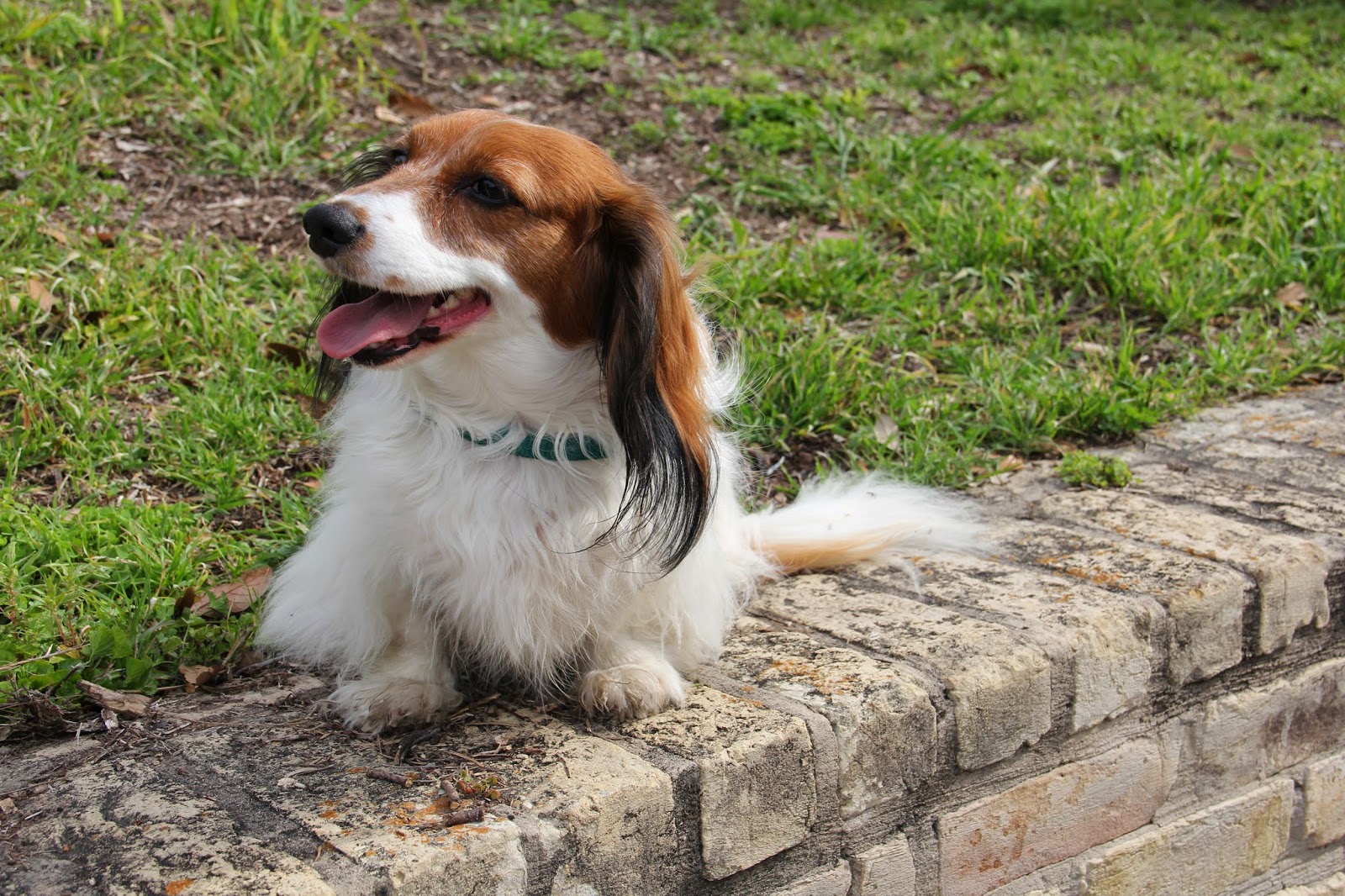 Look, it's a water puddle! 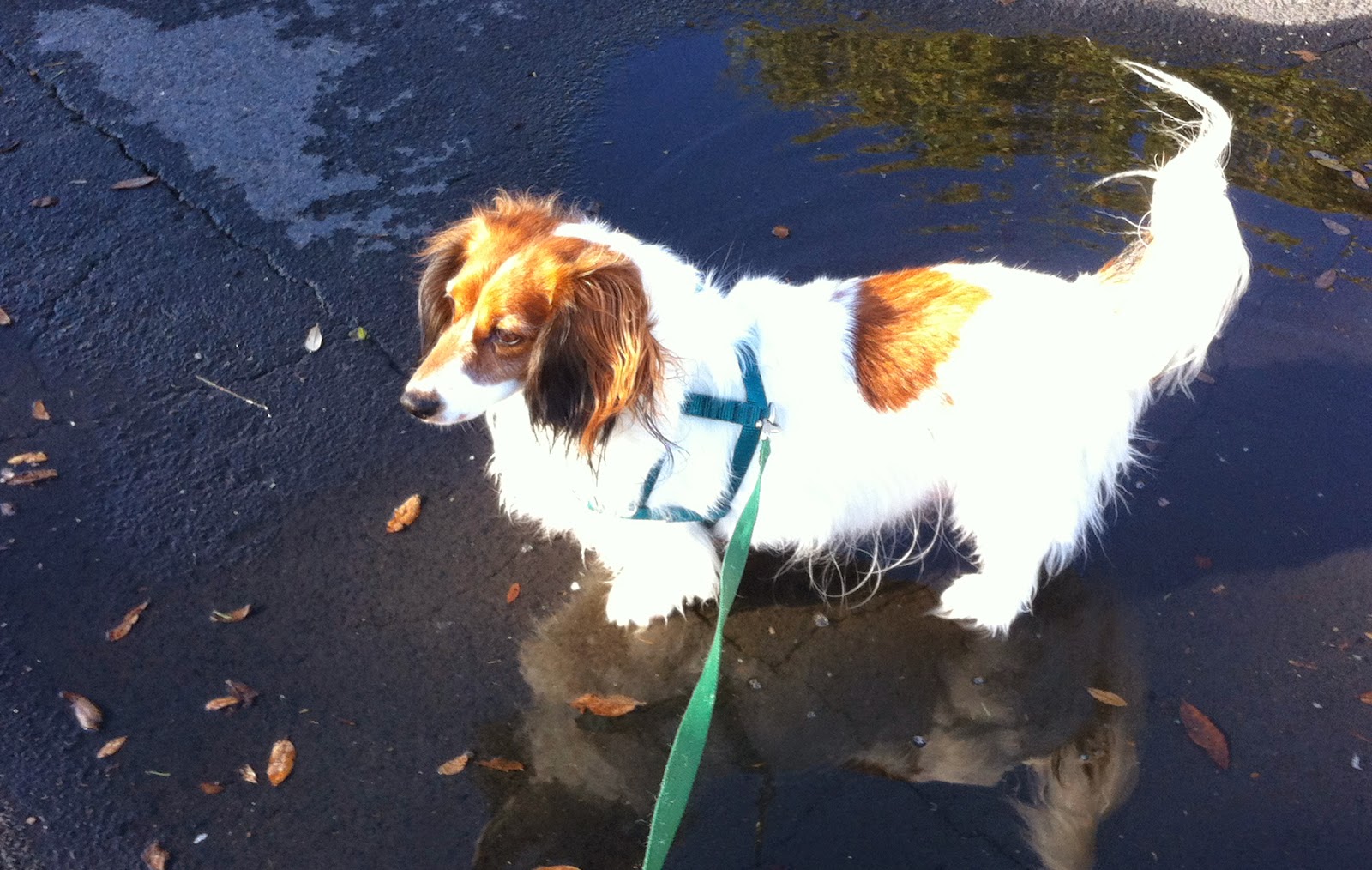 Sawyer absolutely cannot resist a puddle of water; it doesn't matter if its clean, dirty, small or large.  He loves it!  We've had days and days of drizzle and rain (with cold temperatures) and finally on Tuesday afternoon the sun came out and warmed us up to 60 degrees.  There was no excuse not to take the boys out for a neighborhood walk after work.  Sawyer was quite pleased that there were so many puddles.  Of course, the indulgent Dachshund Mama let him stop and enjoy himself! 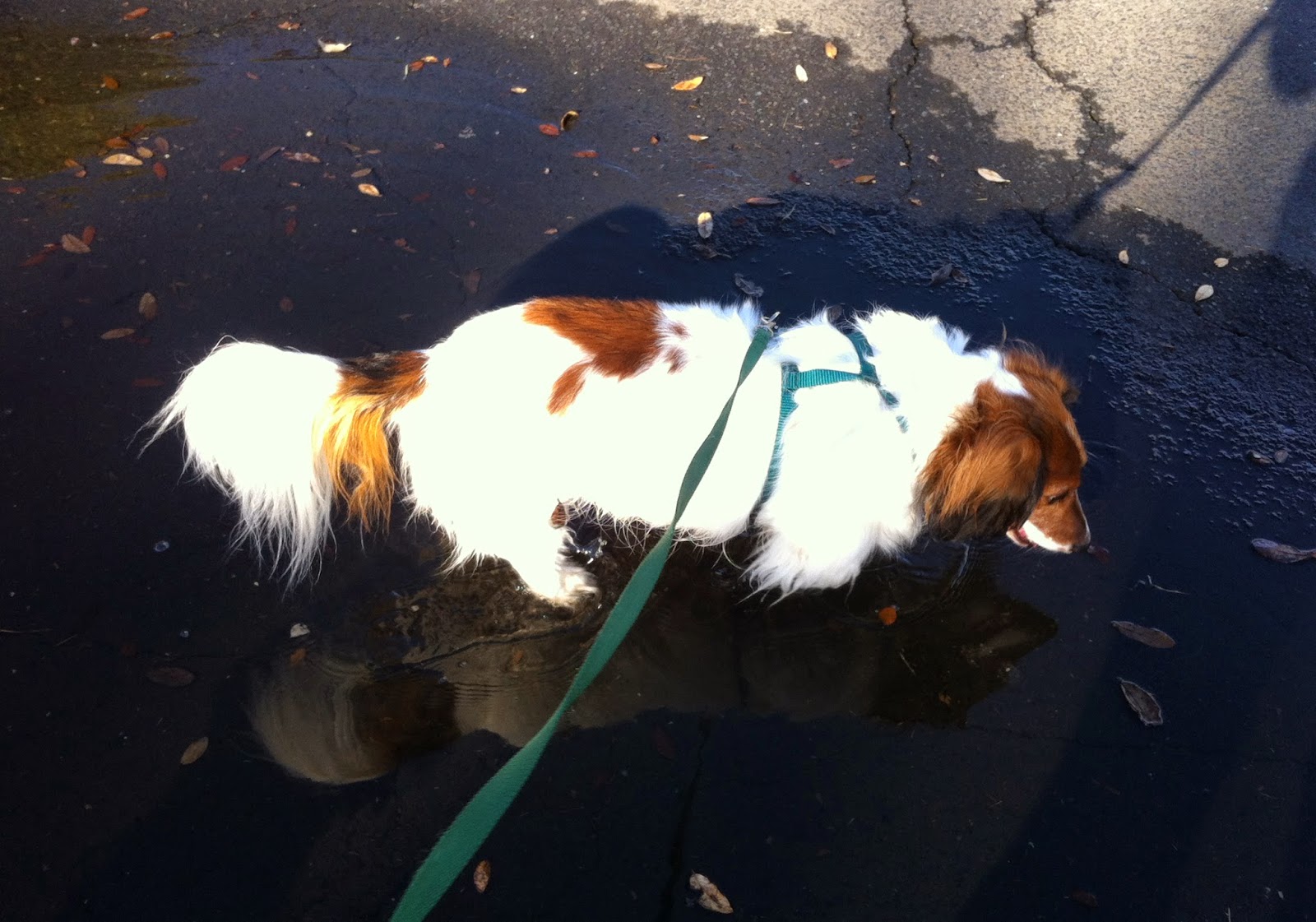 While he enjoyed the water I made pictures with the not-so-great-cell phone.  At the first puddle he actually laid down in the water!  That had to be cold, Big Boy!  Now if I could just get him this excited about the water in the bath tub!
Posted by Beth at 9:32 PM No comments:

The tale of car harness woes

Since I've been posting infrequently you don't have to read back far to know that I had purchased a car harness and discovered the first time I used it that the strap that connects the harness to the car seat belt was sold separately.  If I had actually concentrated on reading and understanding the details on the back of the package before I bought the harness I would have realized that I needed the strap, too.  On our way home that day we did stop and buy the necessary strap.
The next time I tried to use it was when we went to the show in Austin in February.  I put down an old, soft towel in the seat for him to snuggle into, hooked him up and off we drove in the pre-dawn darkness.  After some staring at me he did curl up and snooze.  It was peaceful driving in the dark that morning, just me and the dog.  No radio, no conversation.  I wondered if he realized that he was more comfortable over there and actually able to sleep.

Just as we entered Austin the sun came up.  I turned off the freeway to avoid the awful Austin traffic and was winding around to get to the facility when Bentley put his front paws on the console and gave me the MOM look.  I was surprised that the harness allowed that much movement.  But that wasn't the case.  When we reached the facility I really looked at him -  he was out of the harness.  How did he do that?  Little Houdini! 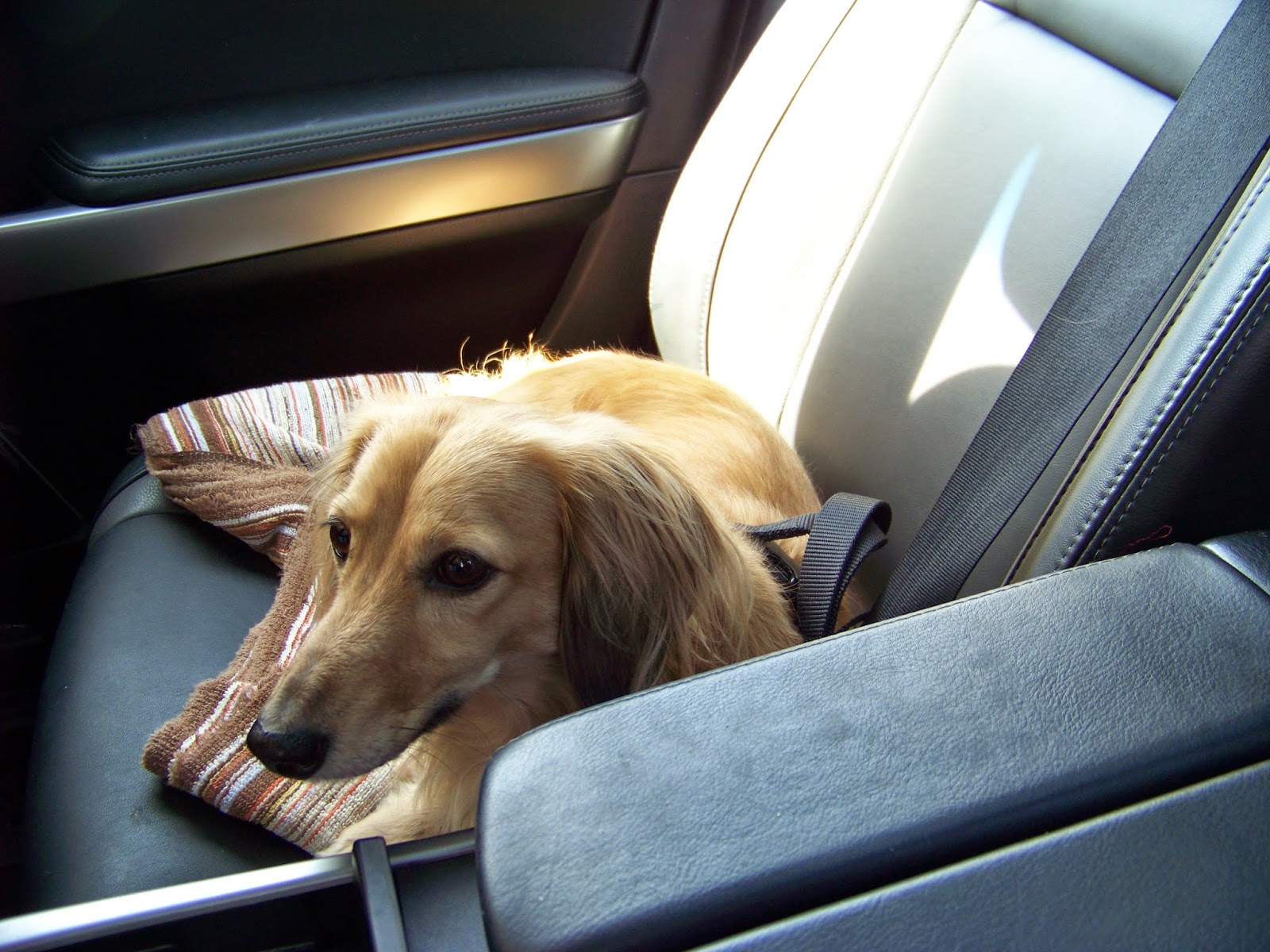 When we were ready to head home I put him back in the harness, still wondering how he had wiggled out.  It was a little loose, so I decided when we got home I would tighten it up a little.  Meantime, Houdini practiced his magic again and by the time I got to the freeway he had his front paws on the console and the harness was off.  As I waited through the last traffic light I helped him over the console and he settled, quite happily, into my lap for the remainder of the trip home.

Last Wednesday night we headed out to the little ring training/practice we sometimes go to.  There was yet another cold front blowing through and I knew we would have to walk across a windy parking lot to get inside so I put his little red jacket on him and then put the harness over it.  I had tightened the straps a little and with the thickness of the fleece jacket it was snug.  No escaping this time.  We drove over to the class, but the facility was closing up (I should have called to confirm since there was a local show going on this week and everyone was already there) so I turned around and we drove back home.

Imagine my surprise when we pulled into the garage and I came around to his side of the car to let him out and instead found a little dog hopelessly tangled in a show lead and a car seat harness.  He was in a mess.  The strap was in such a bind that my weak fingers could not get it to unclasp.  The clasp on the harness was even tighter and the show lead was way too tightly untangled to get it loose.  As I wrestled with the mess I had the thought of having to figure out a way to safely cut him out!  I finally managed to get the jacket undone and pulled through the mess which gave a little room to work with (the lead was still threaded through the jacket neck, but at least the bulk of the fleece was out).  I somehow got his legs through the harness and pulled it over his head.  He was free!
Once again I re-read the package instructions.  I realized that the diagram showed attaching the strap to the upper portion of the seat belt; I had fastened it to the lower lap belt.  Ah!  maybe that is the problem.

So, when we headed out to the show this weekend once again I hitched him in and attached the strap as shown in the diagram.  We've had short rides back and forth to the event facility and on each one he has laid down and snoozed.  In fact on the way home today I put him in the seat and didn't bother to put on the harness.  He stayed on his side of the car and laid down and fell sound asleep, he was so tired from the show!  But I need to try it out on a longer ride to see if he really is comfortable and if it doesn't tangle up again!  I have a suspicion that this harness is really designed for a larger dog and just may not work for us.  We'll see.
Posted by Beth at 8:08 PM 3 comments: