Blossom, Sawyer, Bentley, and Baylee are now on Instagram!

Follow them at TalesofWaggingTails. Only one picture now, but more to come!
Posted by Beth at 9:26 PM No comments:

Where have all the doggies gone?

They went to the kennel, of course!  I've been on a short road trip and left the puppies at the kennel for four nights.  When I dropped them off on Saturday morning Sawyer had major separation anxiety; I had to walk with him over to where they check the dogs in as he refused to walk on the lead with the kennel staff person.  Then I stepped around the corner, but peeked around a few minutes later to check on him.  He was looking anxiously around, trying to find me.  Finally, when it was time for him to go he refused again, so the dear staff person had to pick him up and carry him to the kennel area.  Poor doggie!  And, on another topic he weighed in at 19 pounds, so we've got to get serious about weight loss.


I picked up a little traveling companion along the way.  He was a good companion in some ways; he did not require walks before bedtime or early morning.  He did not bark either and rode cutely in the top of my purse.  He was welcome in restaurants and everywhere I went. But he didn't wag his tail and look at me lovingly.  At night he sat by the computer, he was not warm and cuddly.  Plus, he didn't lick my face!  I was ready to get my real dogs back this morning!

I know they were ready to come home, too.  For one thing they are very tired.  I suspect that it is just a round-the-clock-barking-party at the kennel!  They all keep looking at me like, "Mom, why did you leave us in that place?  Why couldn't we just stay with you?  You kept talking about going bye-bye, but we know that bye-bye means that we get in the car and ride somewhere.  We don't understand why we had to stay there, but are so glad you are back with us and we are at our home!" 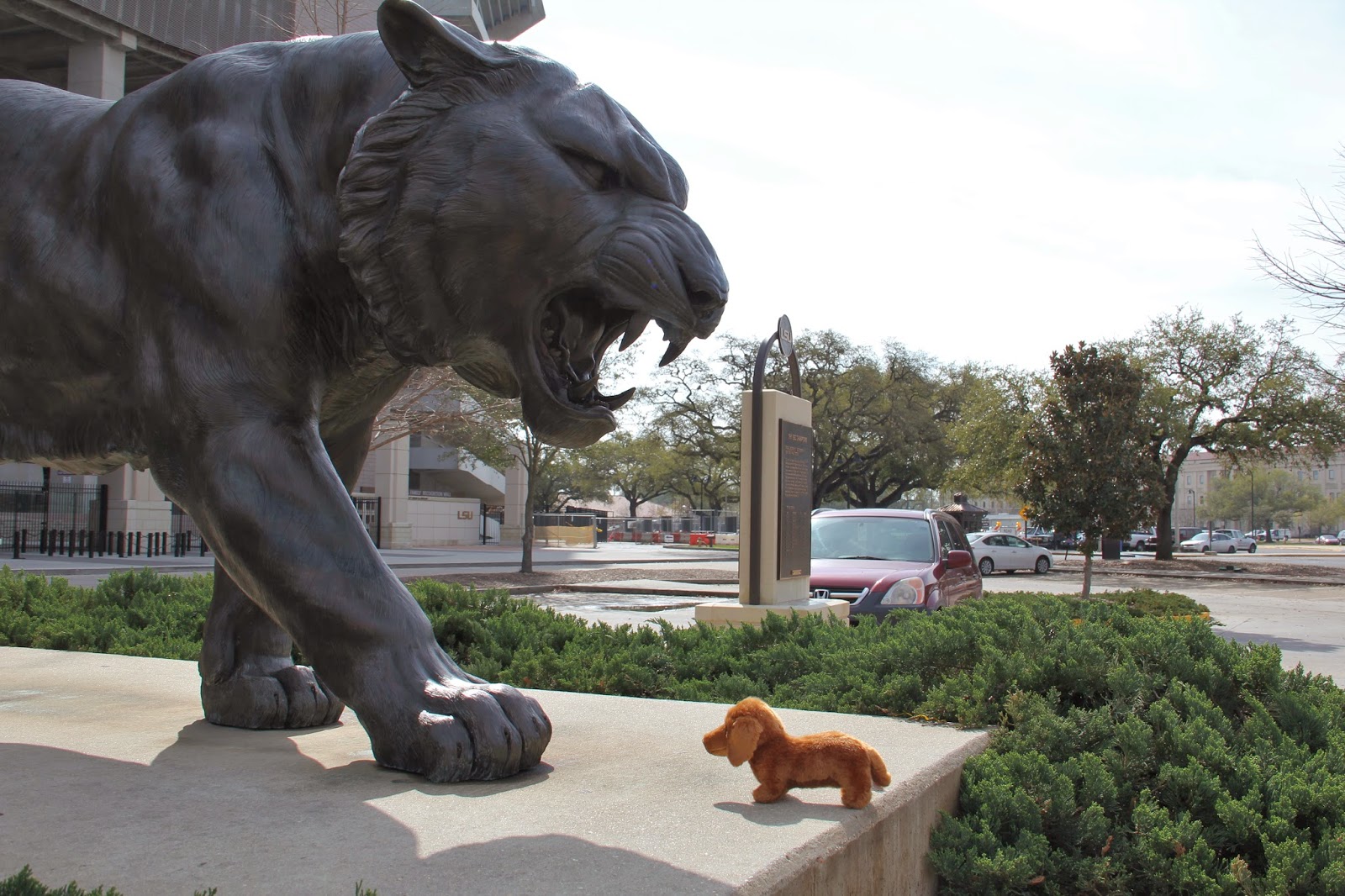 Don't leave your toys outside 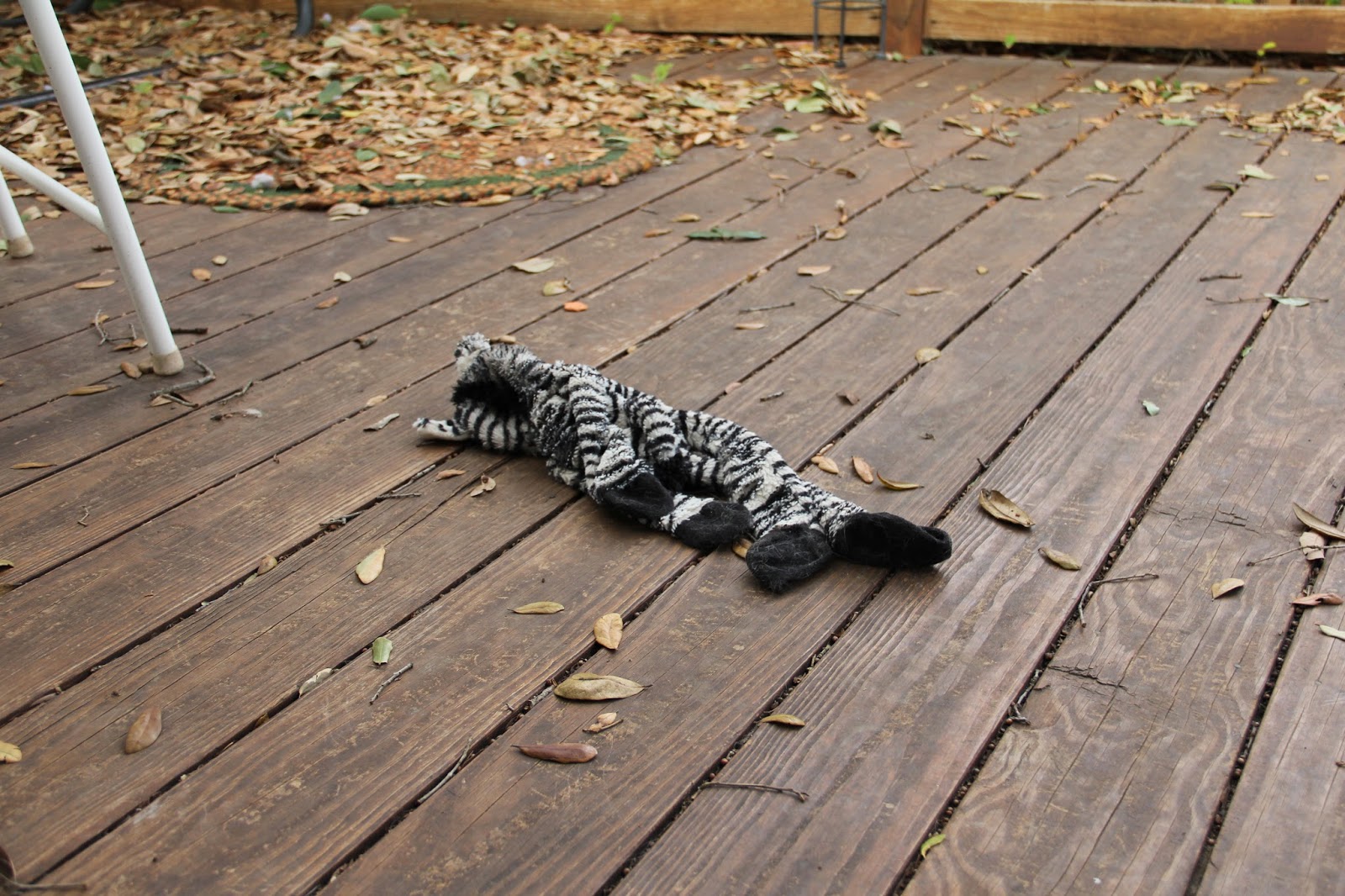 This is the zebra, one of the stuffing-less toys that the dogs dearly love.  Bentley is devoted to his Foxie, but seems to favor this one, too.  Tonight he took Zebra outside, somewhat sneaking it by me.  He's done this before, and as in the past, he left the toy outside when we came in.  Then he realized what he had done and wanted back out to retrieve it!  I snapped this picture before I let him out! 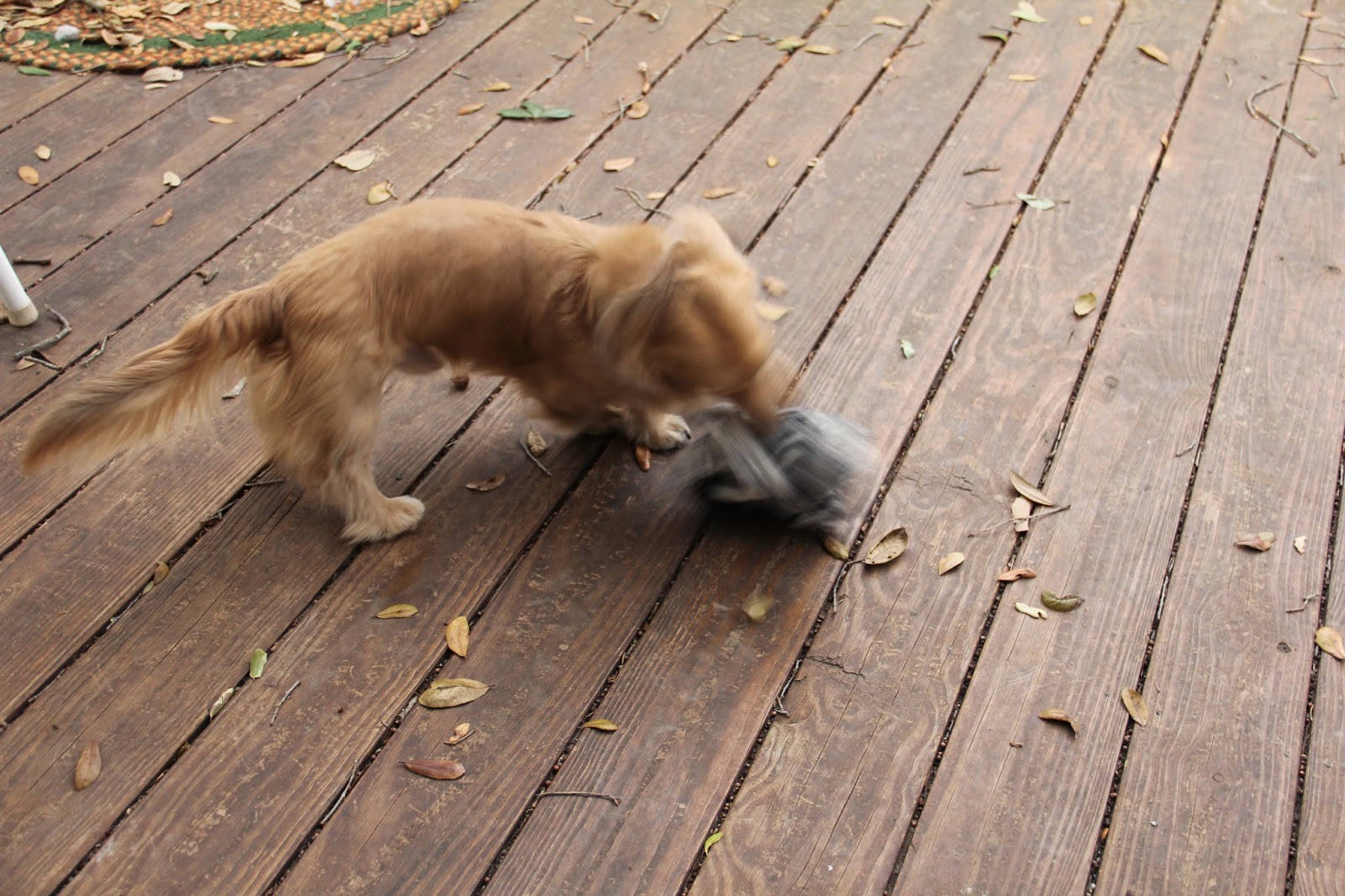 When I let him out he grabbed the zebra and gave it a good shake! 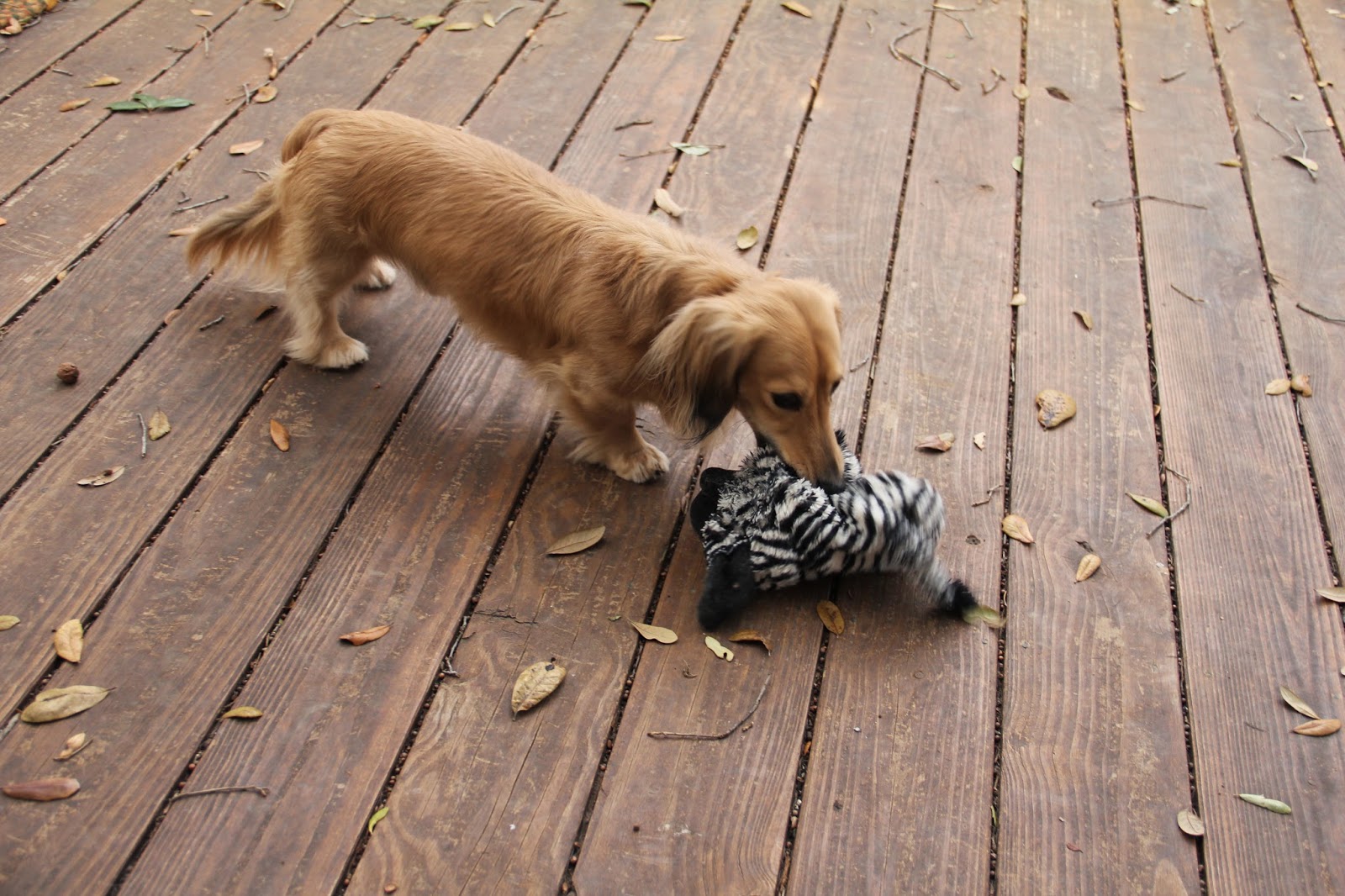 Then he settled down for a good play session until I called him inside.  He brought the toy with him this time, along with a bunch of leaves!﻿
﻿
Posted by Beth at 9:26 PM No comments: 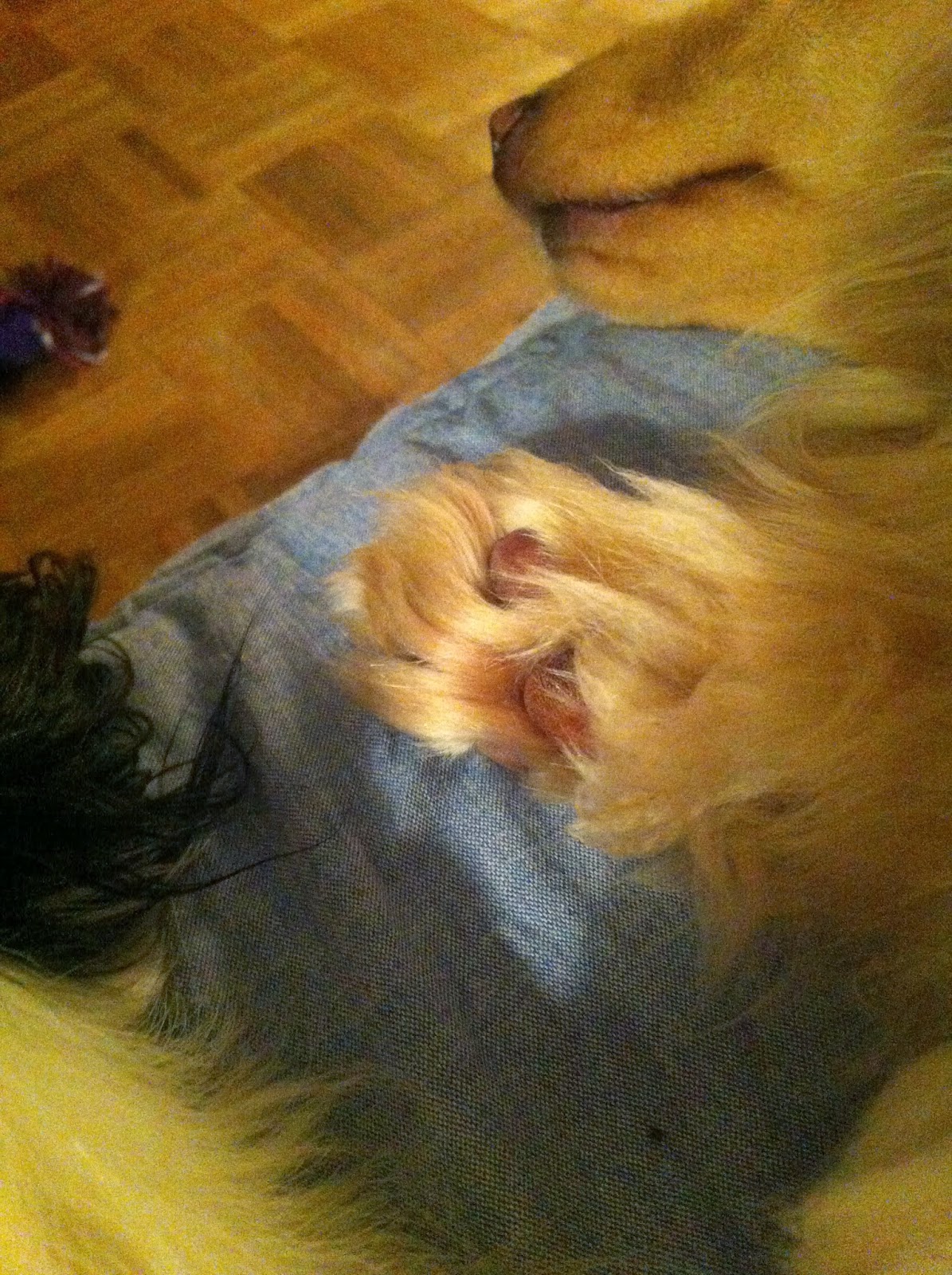 To follow up on the last post, this is why I have to learn how to groom the dogs' paws.  This picture was made with the not-so-great cell phone, but it gets the point across.  It is  the underneath of Baylee's front paw.  The pads are just barely visible, covered over with beautiful long fur.  When the pups go outside these hairs pick up dirt, mud, debris, and I don't know what else.  It is uncomfortable for the dogs to have the underneath of their paws caked up, plus it leaves a mess on the floor.

Typical of dachshunds they do not like to have their paws messed with.  I suspect they may be a little ticklish!  I've just done a little work on each foot with the idea that I will ease them into a full trim.  I've also started gently massaging their paws while they are sleeping next to me on the sofa at night in hopes that will get them to relax a little when they go on the grooming table for a doggie paw trim.
Posted by Beth at 9:55 PM No comments: 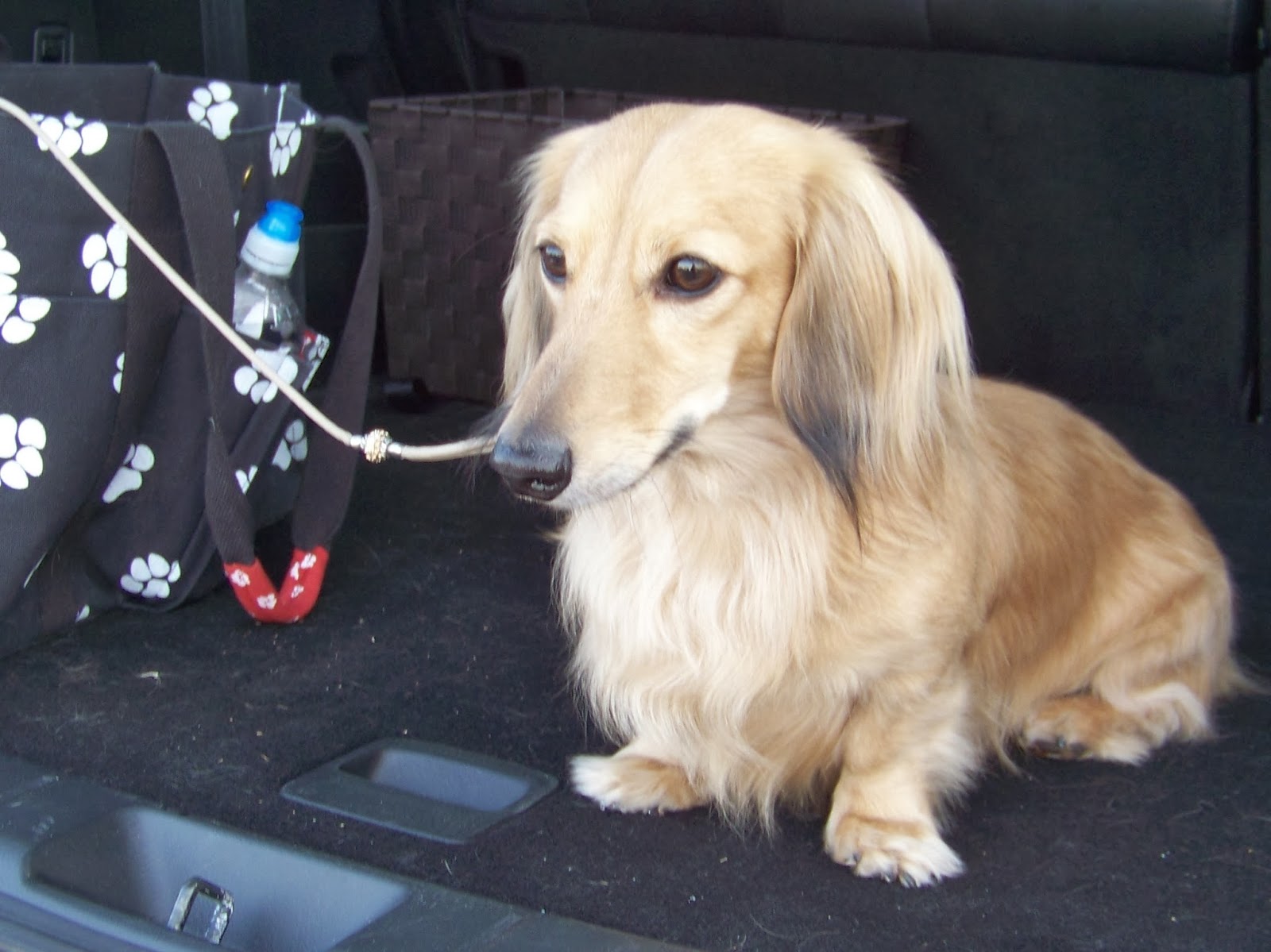 Here's Bentley yesterday morning, waiting while I unloaded the cart and crate at the local dog show.  He did good in the ring, but there was only one other male dog showing - a gorgeous long haired red with a beautiful coat.  Bentley had serious separation anxiety when I left him in the crate for several hours while I worked.  So today, even though he was registered to show, I left him at home.  I just couldn't bring myself to do that to him again.  From now on it is either show or steward, but not both. 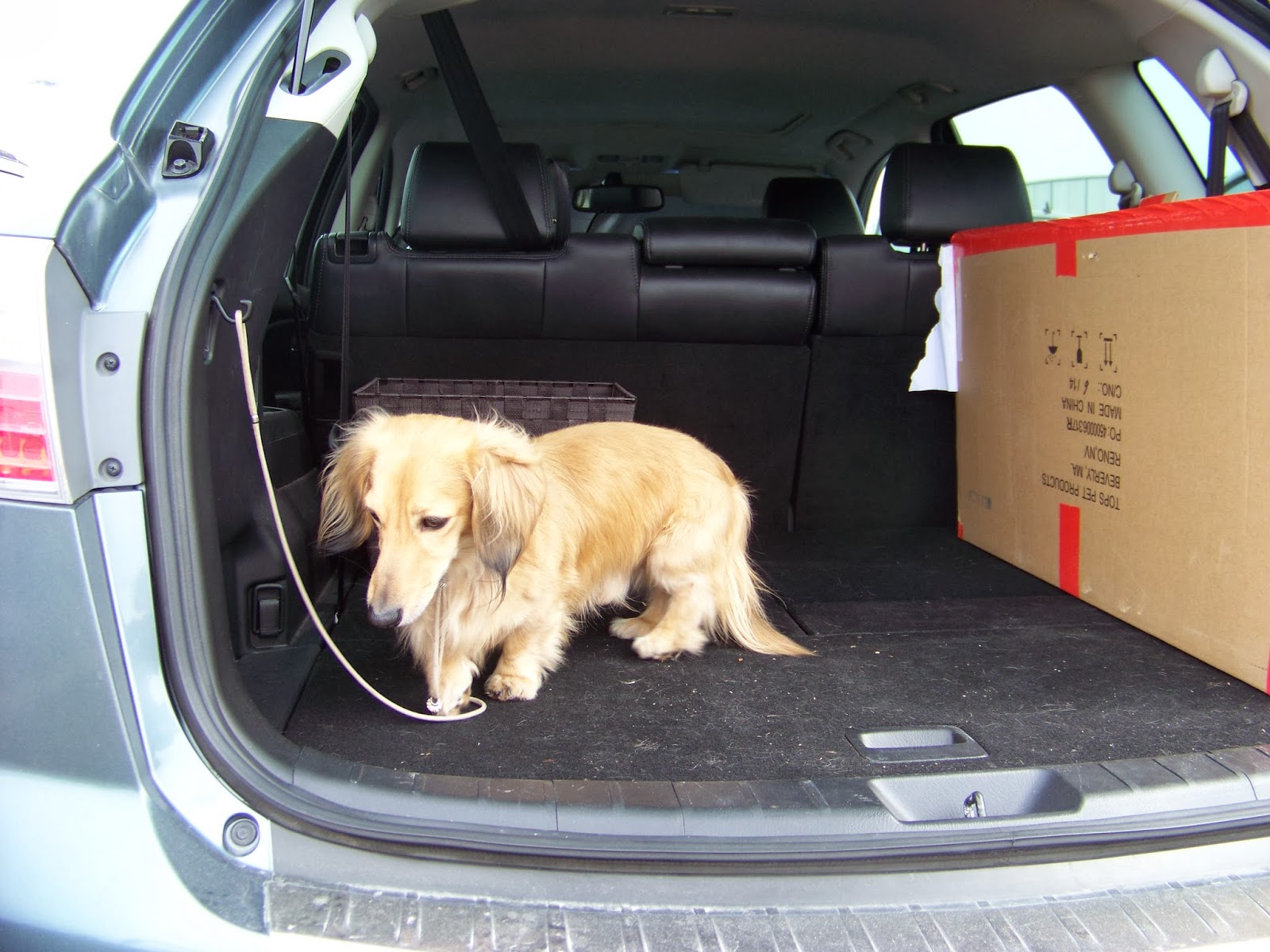 What's in that box, Bentley? 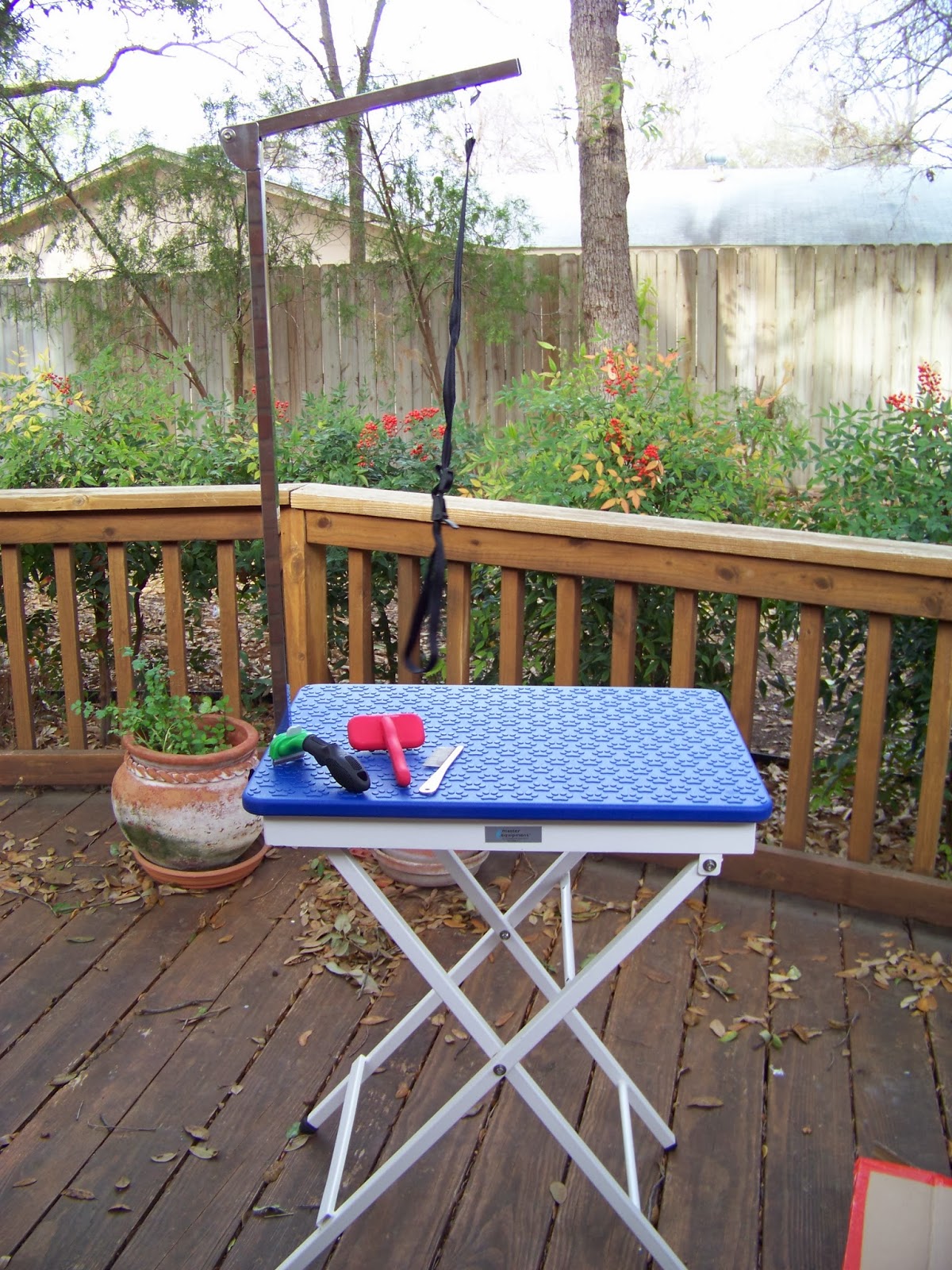 Well, it is a new grooming table for everyone to use!  It is lightweight (#1 requirement!) and it easily folds down.  I tried it out yesterday afternoon and it works great, much better than spreading a towel on the patio table. The nice part is that it leaves both hands free to work on the dog since they are secured with the hanging loop.  I did figure out that since it is low that I need to pull up a chair to sit in while doing their feet. 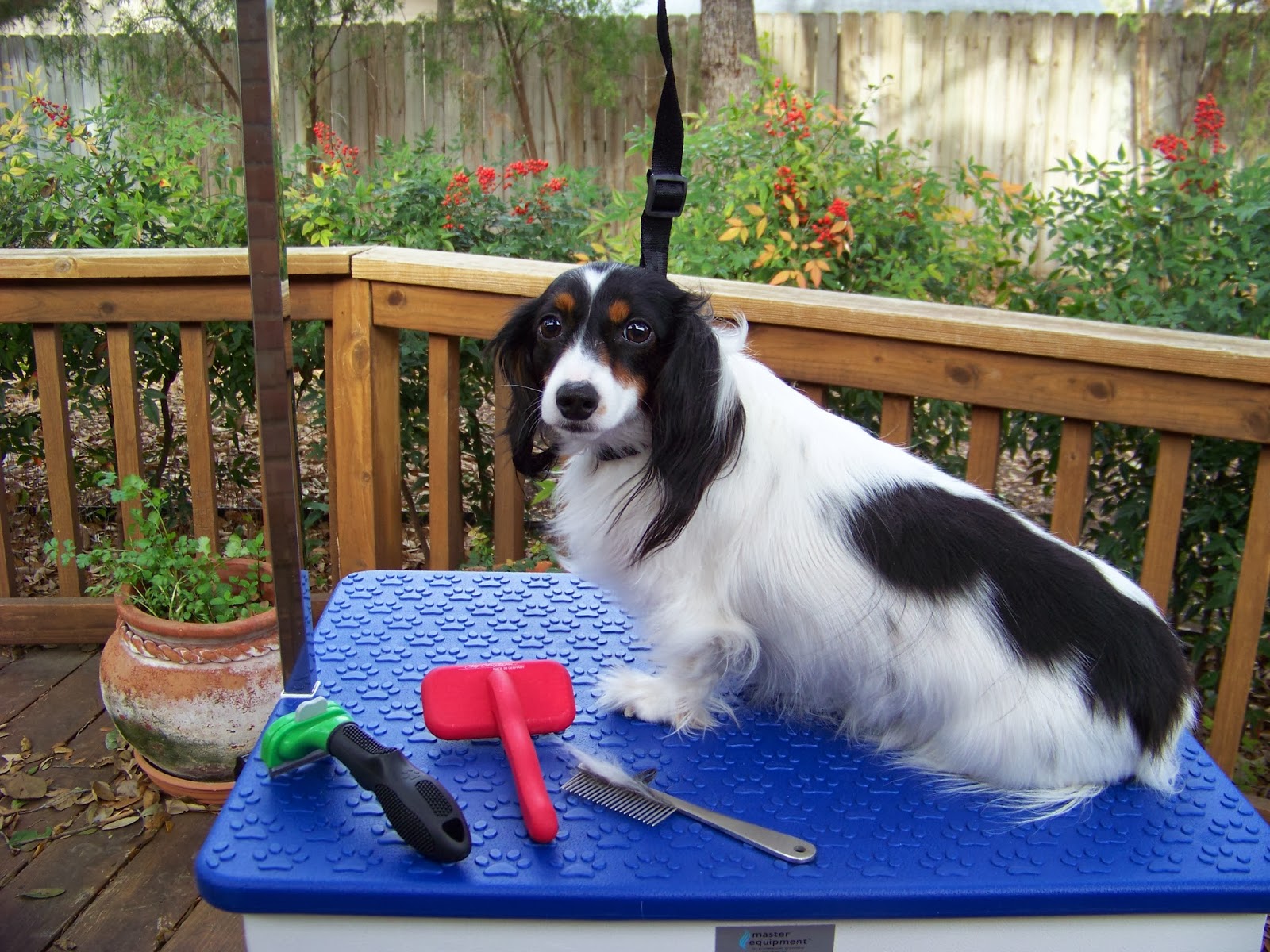 Blossom was the first to try it out.  I'm not sure if she was a little worried about the new table or if she was envisioning a bad haircut! 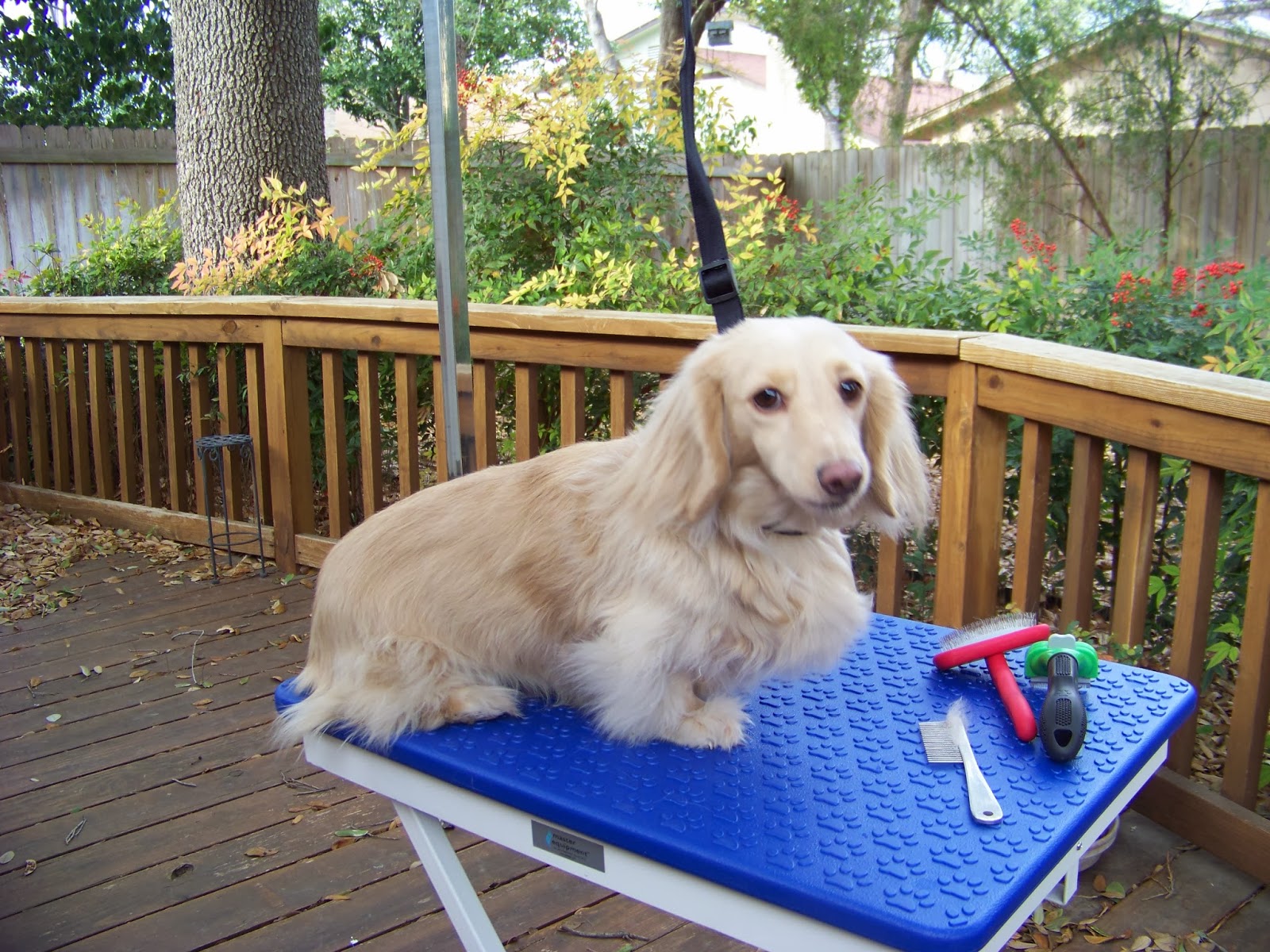 I've never seen a dog that loves to be groomed as much as Baylee.  Of course, if I had that much hair I would want it kept combed out, too! 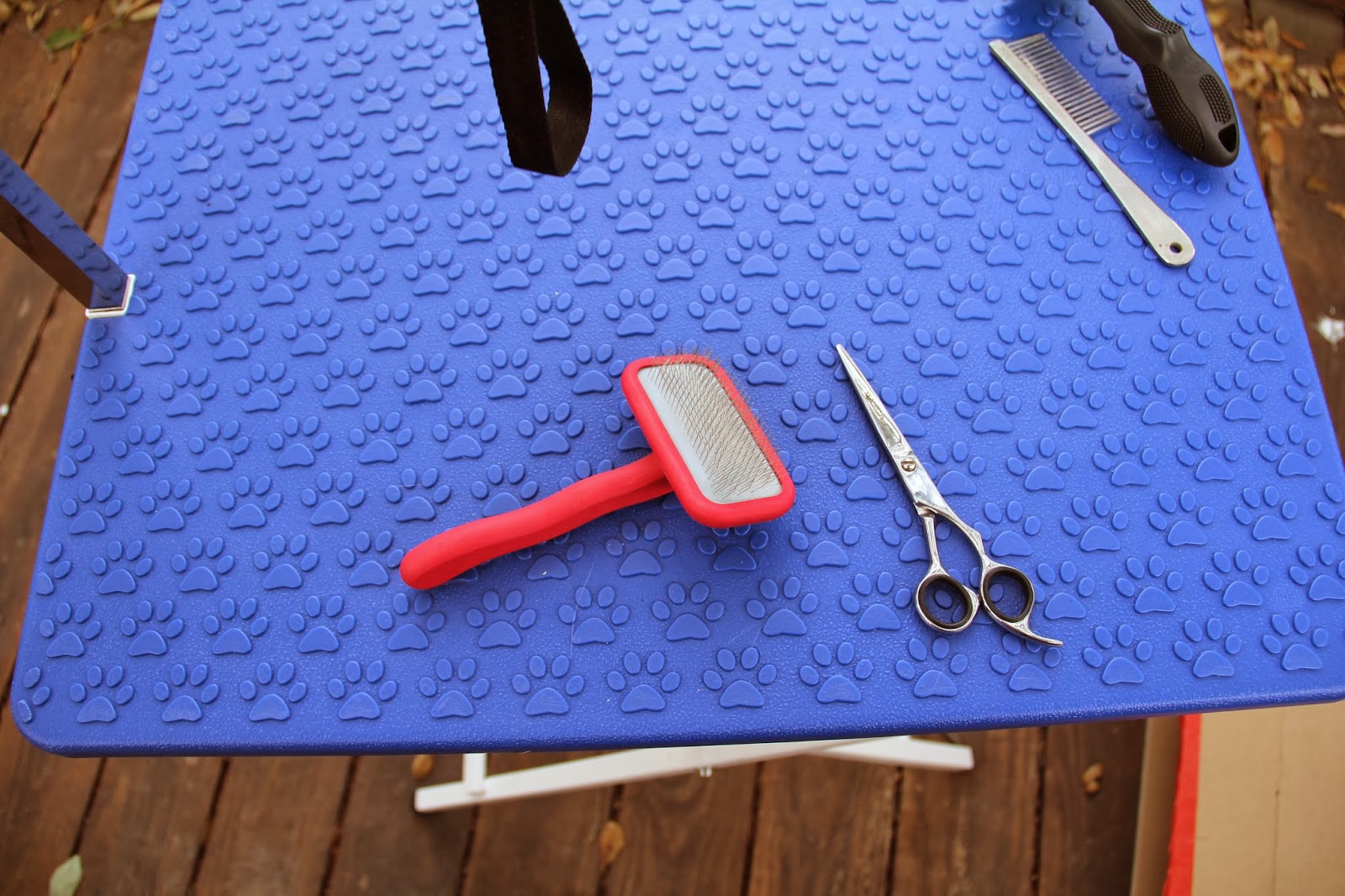 I also bought a slicker brush and scissors.  I like to shop at these shows and support the vendors rather than shopping for things like this online or from big chain retailers.  They usually have good quality products and they are dog people and can answer  your questions.  The guy that sold me the table was extremely busy, but still took time to show me how to set up and break down the table and then he took time to cut a handle in the box so it would be easier for me to carry! 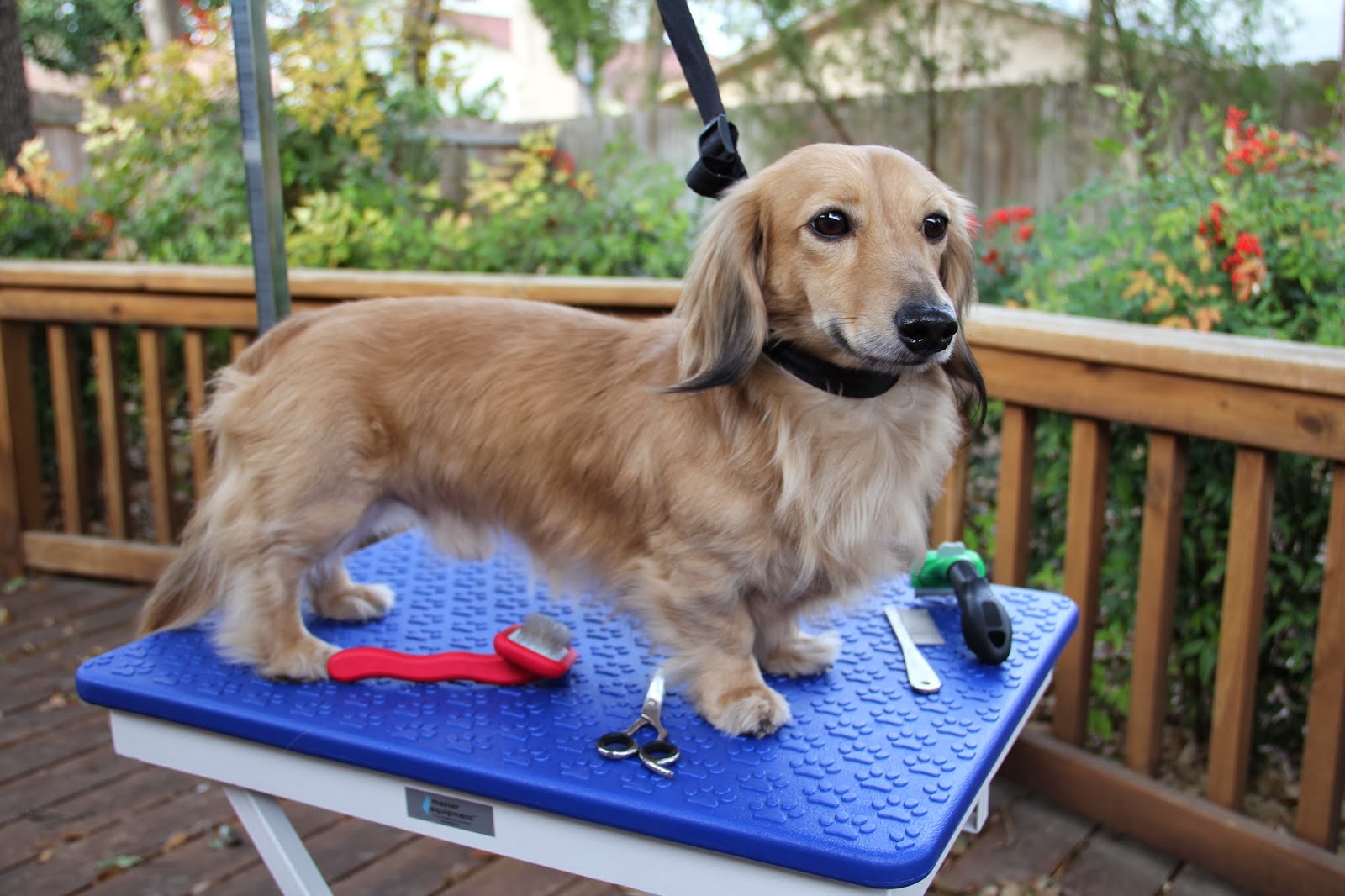 I wasn't sure about the slicker brush until I tried it on Bentley.  It worked great, so I gladly paid the $30 for it. Just as I have found with my sewing and quilting, you have to have the right tools.  The scissors were great, too.  I trimmed up his feet, both top and underneath.  I was careful with the cutting as I didn't really know what I was doing and I didn't want to mess him up!  But he looked fairly good when I was done.  I realized tonight that I did not do a good job on his nail trim, I think my next purchase is going to be a better set of nail trimmers! 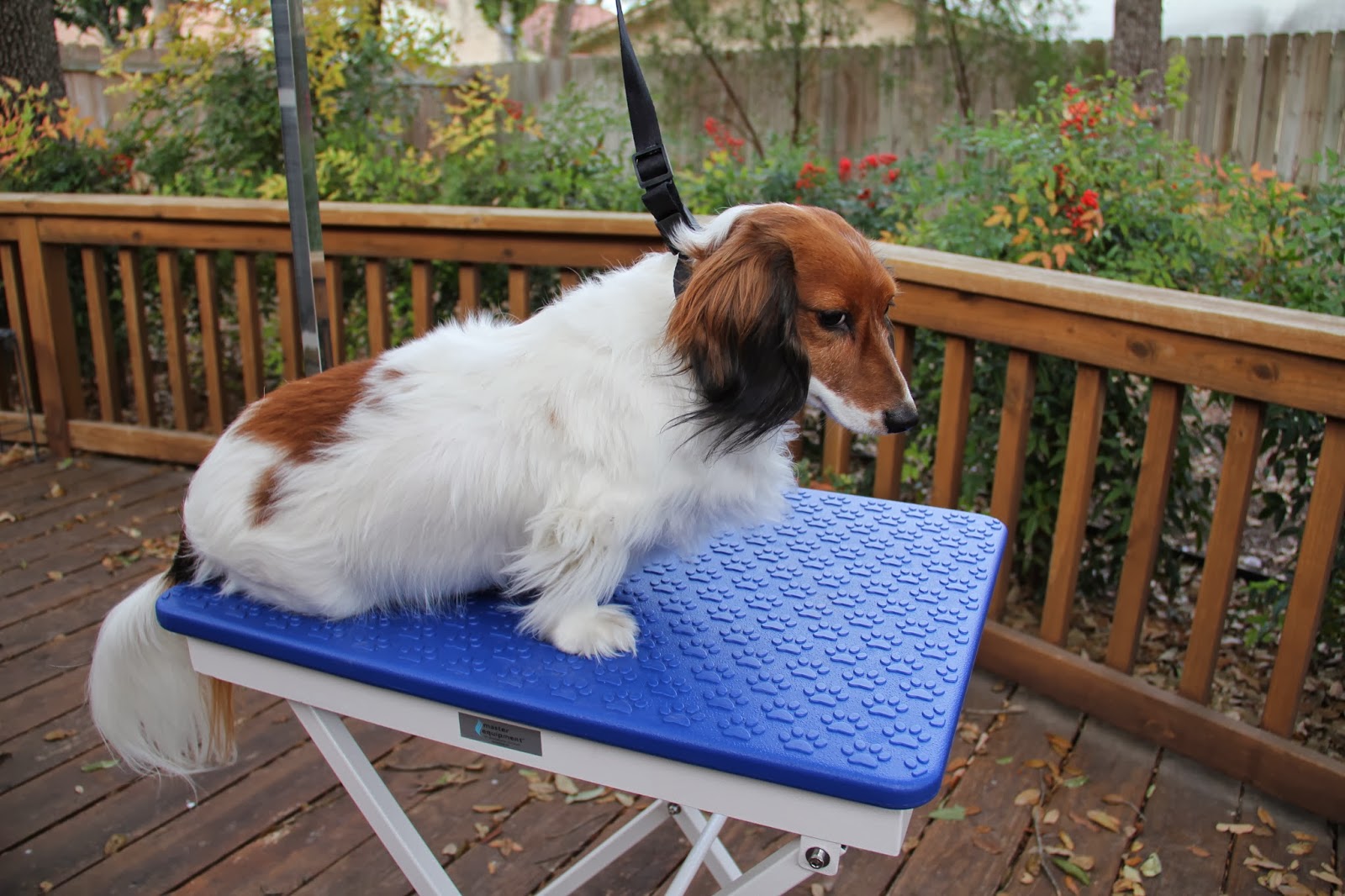 Sawyer was the last to give it a try.  He does not like to be brushed or have his nails trimmed, sometimes trying to hide out somewhere when he sees me doing the other dogs.  He was a good sport and let me comb him out real good and also trim his paws. 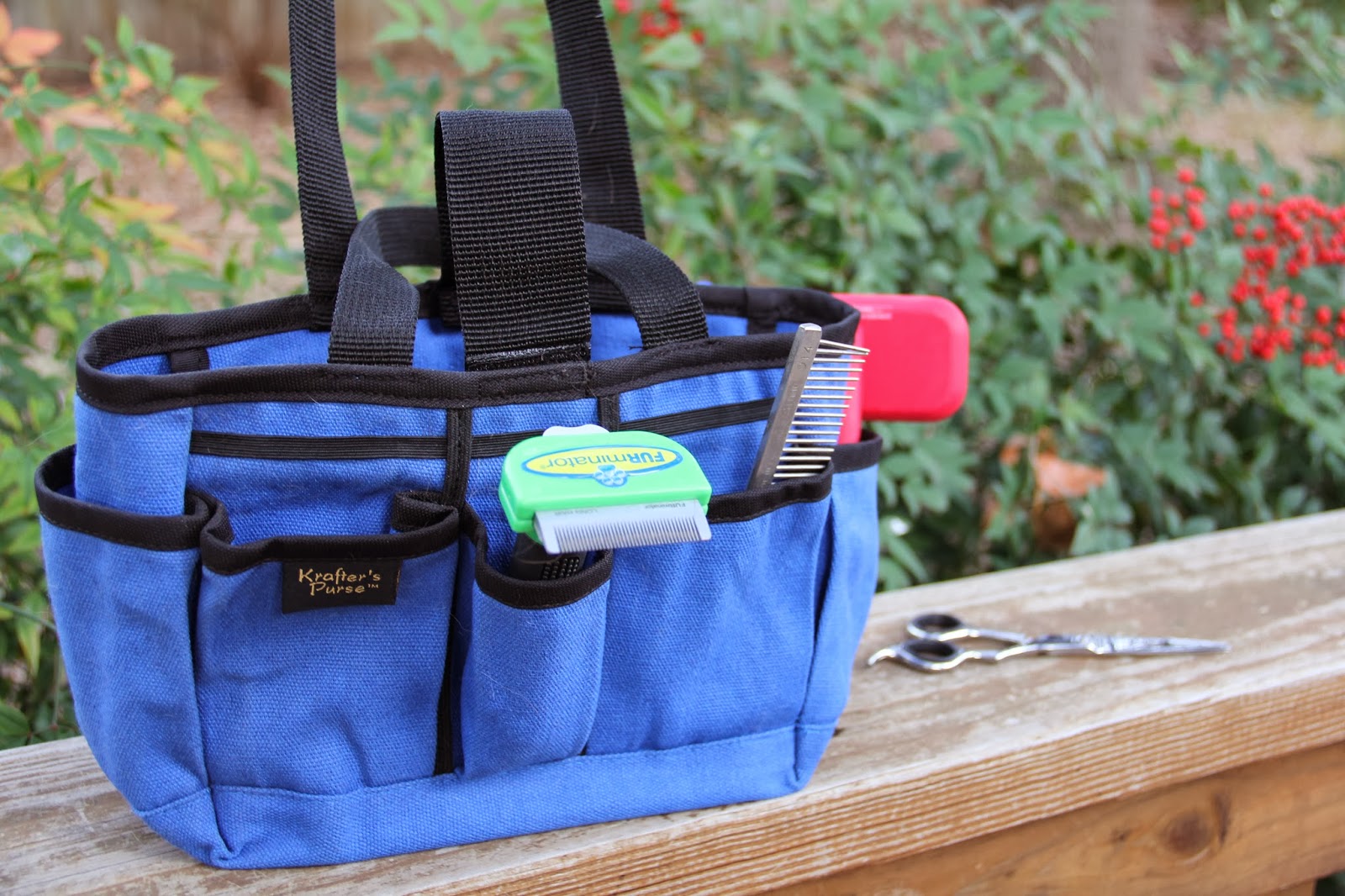 As I was working on the dogs I remembered that I had this little tote bag.  I had bought it to put rotary cutters, scissors and quilting tools in, but most of the time it sat empty and the supplies scattered around the room.  It works perfectly for the grooming tools!
Posted by Beth at 9:50 PM 1 comment: