These pictures aren't quite as descriptive as I would like, but they will have to do.  I had bought 2 little dolls for my little twin granddaughters to play with when they come over.  I took the dolls out of the bag and put them in a rocking chair in the entryway while I went to get scissors to de-tag them. 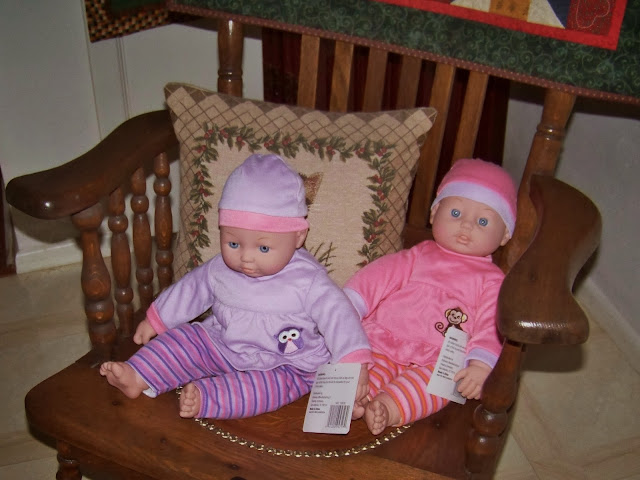 Well, if you know dachshunds then you know what happened.  The dogs "got" the babies!  They thought they had caught intruders or aliens or some critters! 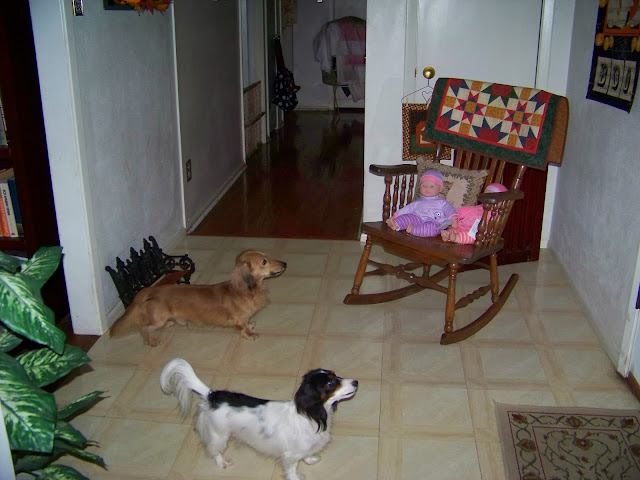 You would thought they had tree'd a possum or raccoon the way they were barking, yipping and howling! 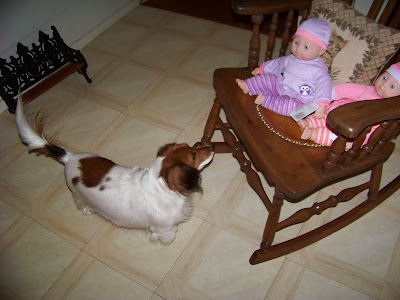 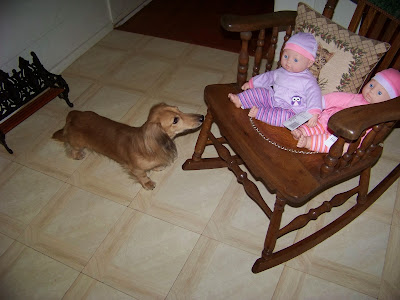 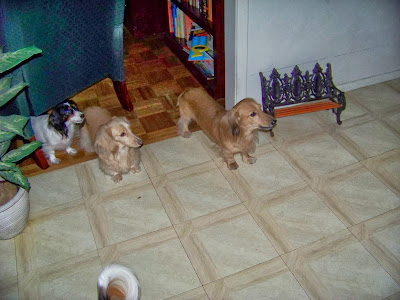 It was fun to watch, but the best part was when I picked up a baby to show them that it was "okay".  They went into retreat mode, still barking!  I will have to note that I did not leave the babies in the chair because I knew what would happen if the dogs could get them - destruction.
Posted by Beth at 6:30 PM 1 comment:

We were waiting for the Cowboy's game to start last Sunday when I caught them all lined up and still.  And, yes, that is Mitzie hanging out on top of the sofa.

Just to note, I made these pictures with the not-so-great camera on my phone because I knew that if in either instance I got up to get the camera they would move.  Sometimes I think I have them figured out!
Posted by Beth at 9:14 PM No comments:

I have to confess that I think I've had a case of mental writer's block.  I have plenty of things to write about, there's always a lot going on with 4 doxies in the house!  But for some reason I haven't been able to write a single word.  I've decided that this is because I backed myself (mentally) into a little square where I had defined the boundaries of the blog.  I wanted to write about the dogs, but also wanted to introduce some more information that would help dog owners and increase awareness about rescue groups and worthwhile dog activities.  I felt that I could only write about certain things and that I had to have pictures for everything.  I blamed work, school, illness and the hot weather for not writing. The result was that I had no posts.  So, it is time to break out of the boundaries I imposed and, for pete's sake, just write.  I think the other information will come, in time.  But for now, it is back to stories of Blossom, Sawyer, Baylee, and Bentley!