This morning Jaydon and I took Sawyer and Baylee over to a "Mardi Paws" event.  It was at a place that is a combination of an in-home pet sitting service and a pet resort.  I went because I thought it would be a great way for the dogs to socialize and I wanted to check out some of the local groups that would be there.  As it turned out, it was more of an adoption type event but that was still good.  The local dachshund rescue group was there and I was able to visit with some of them and got contact information.


They also were doing agility demonstrations as well as fly ball.  I had never seen fly ball and just loved it, so did Jaydon.  Sawyer went beserk...he wanted to run up and down with the dogs.  Every time they ran he got so excited and just barked and barked.  I wish I had time to get him into something like that because he would really enjoy it.
We also checked out the resort and their facility.  I was impressed because all the outdoor areas had grass!  And they had a koi pond in the dog park area...guess who jumped into it....Sawyer!  Silly dog.
Baylee did real well.  We had to pick her up a few times because she would get scared a little but I think she knew she was safe and that we would protect her, too.  She did enjoy herself and she was okay with the other dogs as long as they approached her slowly.
Posted by Beth at 9:54 PM No comments:

Several weeks ago Sawyer discovered that the octagonal rug in the living room was held in place with rug tape.  He proceeded to pull up the rug and rip up the tape, piece by piece.  So I got a new roll of tape and re-taped the rug.  No problem as this has to be done every now and then since the tape looses it's stickiness.
Yesterday morning as I was finishing getting ready for work Sawyer started working on the rug, again.  So I took the piece of tape away from him and put it back under the rug since it was still fairly sticky.  Last night I was sitting at the kitchen table studying when I realized that there was a fair amount of noise coming from the living room.  Well, now there were 4 little dogs working on the rug tape!  They had the rug about half flipped over and were ripping up tape at a fast pace.  Needless to say I was aggravated and they heard "no no leave it" over and over as I picked up the pieces of tape and threw them away.  I was aggravated!
For an encore this morning, as I was finishing getting ready for work they went into the closet in the sewing room and retrieved a one page knitting pattern that was folded up and in a bag with yarn and needles.  They brought this into the living room and by the time I walked into the room had half eaten, half shredded the pattern.  I have no idea now how to make the scarf and have no way to retrieve the pattern electronically.  I have no idea how they choose to destroy this one item but they were successful at misbehavin'!  The bad part is that I couldn't fuss at them, I just picked up the pieces, put the pups in the kitchen and said good bye.
Posted by Beth at 9:53 PM No comments:

Blossom and Sawyer were born February 15, 2010 so they are now officially one year old!  I didn't pick them up until April, so I think of that date as their "gotcha" birthday.  It has been fun to watch them grow and see their personalities develop, but it has been hard, too.  Having multiple babies is a challenge but at the same time they are good company for each other.
﻿﻿ ﻿﻿


Happy birthday and many more!
Posted by Beth at 8:41 PM No comments:

(This was originally posted on Tuesday, December 21, 2010 on SSTOL blog but thought it should be included on the dogs' blog, too.)

Grades are in (for all three dogs):


Recommendation for next semester:  Intensive training in obeying commands and listening to instructions while still at the formative stage.  Will need to have a retaining wall built along the side fence as the art of escaping has been perfected and is not needed anymore.  No action is needed as far as Christmas presents and ornaments are concerned as they will soon be put away.  Should continue to wag tails and snuggle as much as they want.  Overall they have been successful in being little loveable rascals.
Posted by Beth at 9:54 PM No comments:

Last Monday Bentley had his second visit to the vet's for shots and progress check up.  Of course, he passed with flying colors and was greatly loved by everyone!  He weighed almost 6 pounds so now he can have a whole vitamin, no more breaking them in half!  He was so good, never flinched with the shots or the nasal drops.  He has one more appointment for his rabies shot and then he is done with the puppy visits.
He did throw up as we were leaving the vet's office, all over my dry clean only skirt and the car seat.  But I'm sure the problem wasn't car sickness or nerves.....the girls in the vet's office gave him several nice size treats.  So next time, no treats (sorry little guy!).

I'm going to try to have a little photo shoot this week.  Our weather has mercifully warmed up so we can enjoy being outside.
Posted by Beth at 9:13 PM No comments:

We had a small snowfall last night.  Not much really, but a rarity for these parts so we enjoy it while it is here.  The puppies just loved it!   They weren't the least bit scared and they just played and played.  I let them out several times during the morning as it was too cold for them to stay out very long (after all they are house dogs now!). 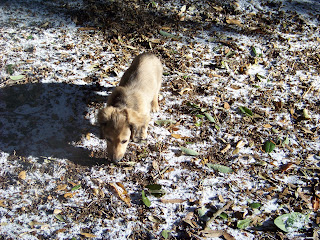 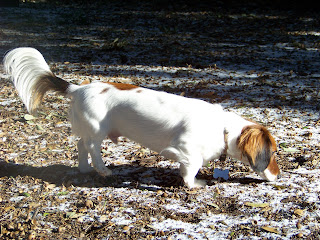 I've been wanting a picture of Sawyer's tail and he gave me this opportunity as he smells the snow.  Isn't it beautiful? 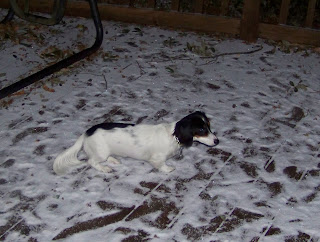 Blossom paused to look at something.  Note her tail flag, too.  It may be even longer than Sawyer's when they are finished growing out. 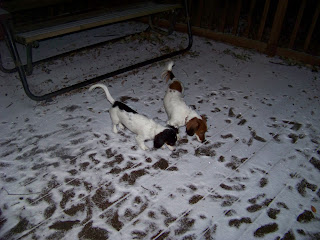 The deck was beautiful until they ran across it! 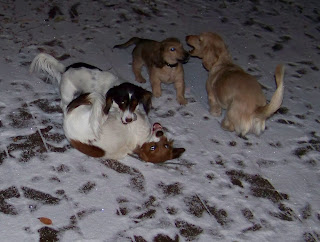 Here they are just playing and playing!
Posted by Beth at 8:05 PM No comments:

I've decided that I usually do things the hard way, but then again I'm stubborn.  So I got the dogs and now, almost a year later, have realized that I need to get more information on raising dogs and learn how to do this right.  So I have several books that I've picked up or downloaded to my Kindle.
The book I'm working on right now is specifically about dachshunds.  The author made an interesting point about understanding dachshunds. They are typically classified as stubborn, and I can see why.  But this book points out that they are not stubborn, they are just intelligent dogs that are independent thinkers.   And she went on to detail that they have the ability to think without requiring direction from humans.  She also makes the point over and over that training a dachshund has to be fun, they don't like boring, repetitive instructions.
So I've realized that I need to re-think the whole dog training thing to look at this from the same point of view that they have, in other words I need to think like a dachshund.  This may not be easy since I still think the old way, like you do with other dogs.  But since I'm stubborn I may be able to get into their mindset fairly easy (ha ha!). More to come on the training subject later.
And on a lighter note...during the past hour while I've tried to read and do this post I have probably had to get up no less than 20 times.
Posted by Beth at 10:20 PM No comments: 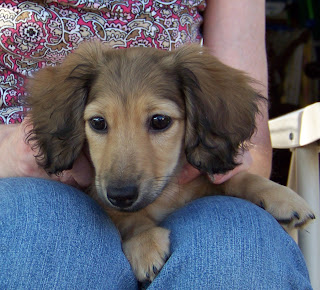 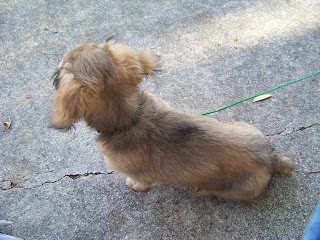 This little boy is growing so fast!  I made the shot of his back to show how his coloring looks now (at 11 weeks).  I want to make more pictures but right now it is too cold to get outside.  We make quick "go potty" breaks and then run back inside to snuggle up together!
Posted by Beth at 10:04 PM No comments: