Time to loose the weight!

Sawyer is overweight.  The last time I had him weighed he weighed just over 19 pounds.  When he had his check up in May the vet wasn't too concerned; he said that Sawyer could loose a pound or two.  But I think he needs to loose a little more.

I've been telling myself that we need to get out and start walking again and stick to the plan, make it a habit like it used to be.  Even with the cooler weather I have just put it off.  Until now.  On Sunday afternoon Sawyer went in the kitchen and laid down by himself.  I thought that was odd since he is usually close to where I am.  Later I noticed he was scratching, and knowing that he does not have fleas I decided to check him over.  I suspected that he had a sticker or debris caught in his fur or that he had a little ouw-wee.  I stood him on his hind legs to get a good look at his underside and that's when I realized that we had a problem.  His tummy looked like a sausage that was about to pop, much like a small puppy's stomach only bigger.  That, plus the way he had laid around all afternoon concerned me.

Yesterday as soon as I got home from work I changed clothes and we were out the door, no excuses.  I made sure to check the time on my phone as we left since I wanted to time our walk.  Normally I would walk about 40-45 minutes, but with his weight and not being conditioned I knew I had to watch him and the time.

As usual he was out the door and at the end of the leash, ready to go.  I let him lead for a while and then settled us into a brisk walk.  Of course, he wanted to stop and smell everything, but we had to keep moving.  When he started to slow down and drag behind I checked the time:  10 minutes.  I decided to walk a bit more before turning around to head home, but within a minute he was really slow.  Time to  head home.  Our total walk time was 17 minutes.  After a cool down on the deck and some water he laid down.  I've always been told that if a dog lays down after a walk then they have had a sufficient amount of exercise.

Tonight I followed the same routine; however, he seemed to settle into the brisk walk quicker and kept the pace going steadily.  I walked a different route, as is my habit, and noticed that after 10 minutes he was still on a good pace.  I kept us going for a few more minutes and then we were heading home.  Total walk time was 23 minutes and he never dragged behind.  I'm going to let him set the time frame until we can get back to our normal walk time.

I was reading through a little magazine that I get from our vet and there was an article about dog weight.  It recommended taking a 15-minute brisk walk each during the week and then a 45 minute walk on the weekends that was a little more leisurely.  I think that is good advice, but feel like we can do more than 15-minutes. But that suggestion helped me to realize that a short walk is better than no walk. 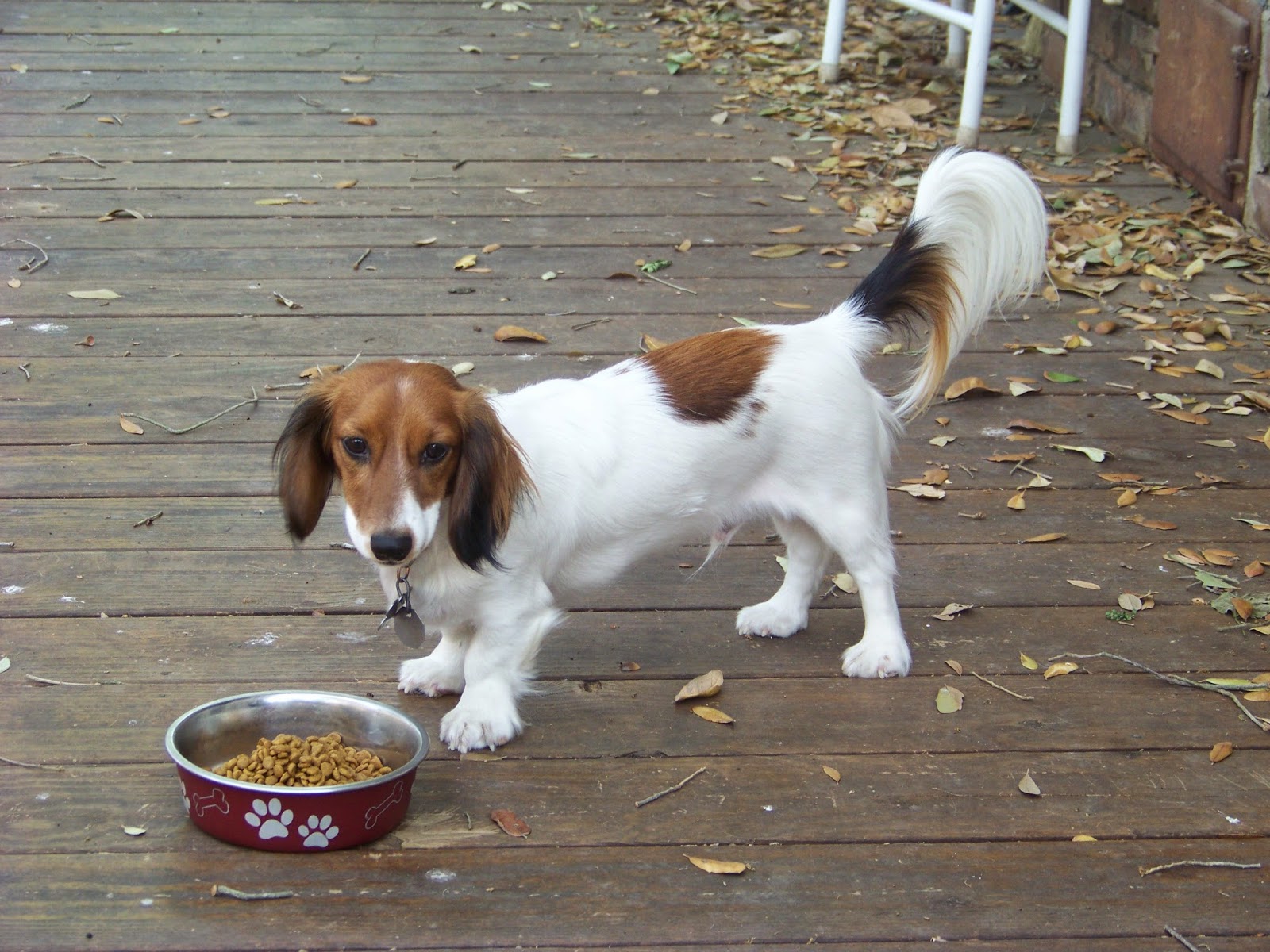 Sawyer was 14 months old in this picture and still at that somewhat awkward stage, but see the difference?  I had found this picture Sunday night after seeing his little about-to-burst-belly and it helped me get motivated with his weight loss plan! 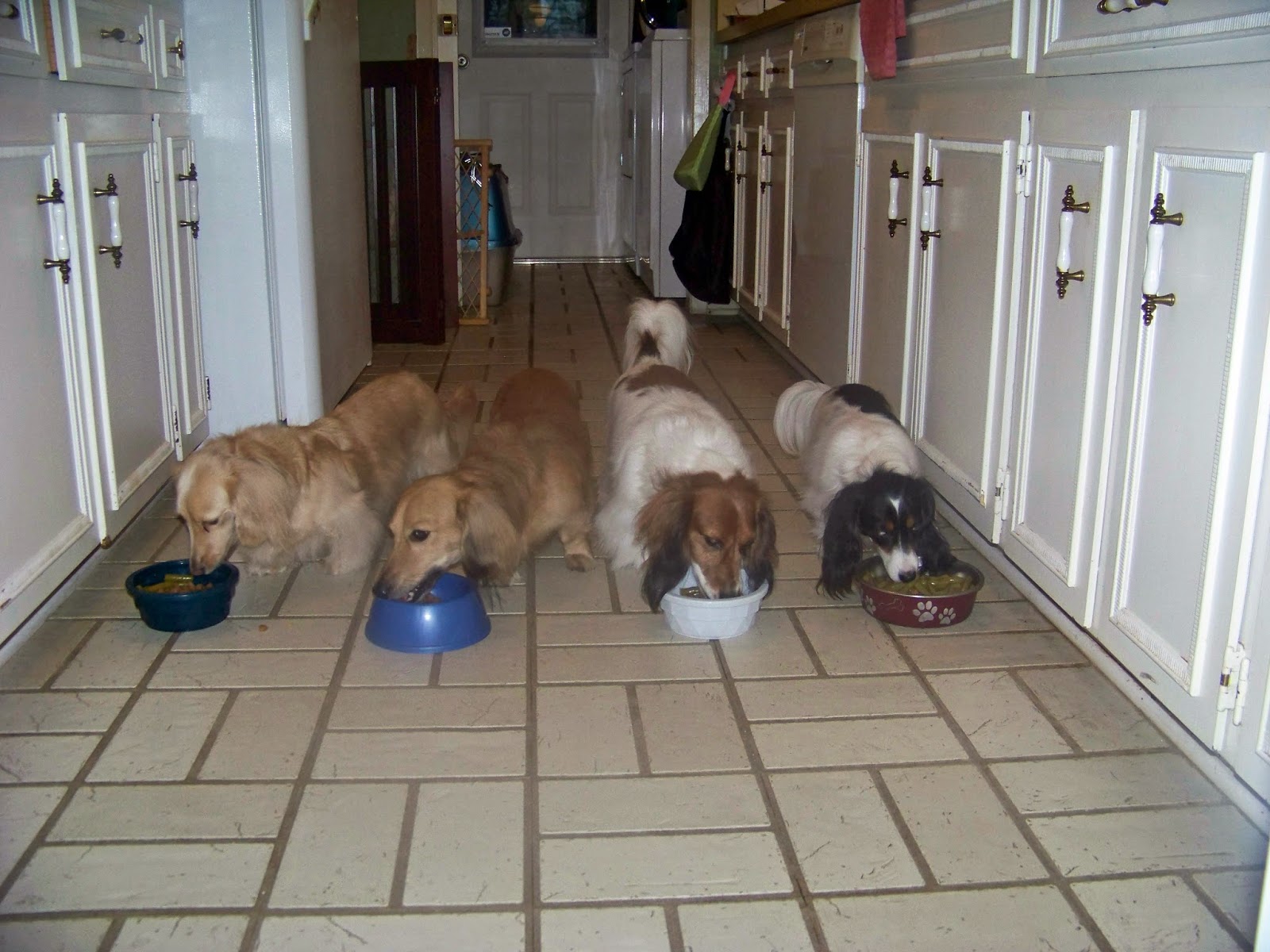 These puppies don't normally line up like this to eat!  This afternoon as I was re-arranging the canned goods in the cabinet I found a can of store-brand green beans and remembered that I had not fed any veggies to the dogs in quite a while.  What a treat!  I put the bowls down in a row and they all buried their noses in the bowl.

Normally they will either ignore the food for a while or one or two of them will eat. There is also usually some rotation from bowl to bowl. I've never had dogs that are so uninterested in food and don't care what time I feed them.  All it takes is just a little motivation in the form of human food!
Posted by Beth at 8:56 PM 1 comment:

I took off today so I would have a nice, long weekend.  My plans were to do a few catch up things and then have lunch at one of my favorite lunch-only spots and head to the downtown library to do research.  Since one of the catch up things was to take Bentley by the vet's office for bordetella and Trifexis refill and the other things were places he could go, I decided to take him out and about.  I love taking the dogs to places and plan to do this more.  Obviously, I would not take them to a restaurant or grocery store and would be respectful of any business with a "no dogs allowed" sign.

The staff at the vet laughed when I told them that as I turned the corner onto their street that Bentley let out a big whine!  I don't really think he knew where we were, but then again maybe he did.  He had to be carried into the back for the nose drops, but quickly came back wagging his tail.  I'm sure he was relieved that this was an easy visit!

Then we headed to get the oil changed in the car.  Since I knew we had time I walked him a little before heading into the waiting area.  There was plenty of grass and landscaping, but I choose to walk down a little strip center to a grassy area at the end.  Bentley smelled around and then proceeded to roll all in the part grass part weeds.
At first I thought there was something gross in the grass that he was rolling on, but I couldn't see anything.  After he had rolled for several minutes it did occur to me that there might be stickers in the weeds.  And there were a few caught in his leg hairs that I had to pull out; I did not want them going home to my yard with us!

We walked back toward the oil change place and stopped again for a bit.  I was using the not-so-great-camera on the smart phone and was very surprised when I got home and looked at the next picture.  It was great, not sure how that happened. 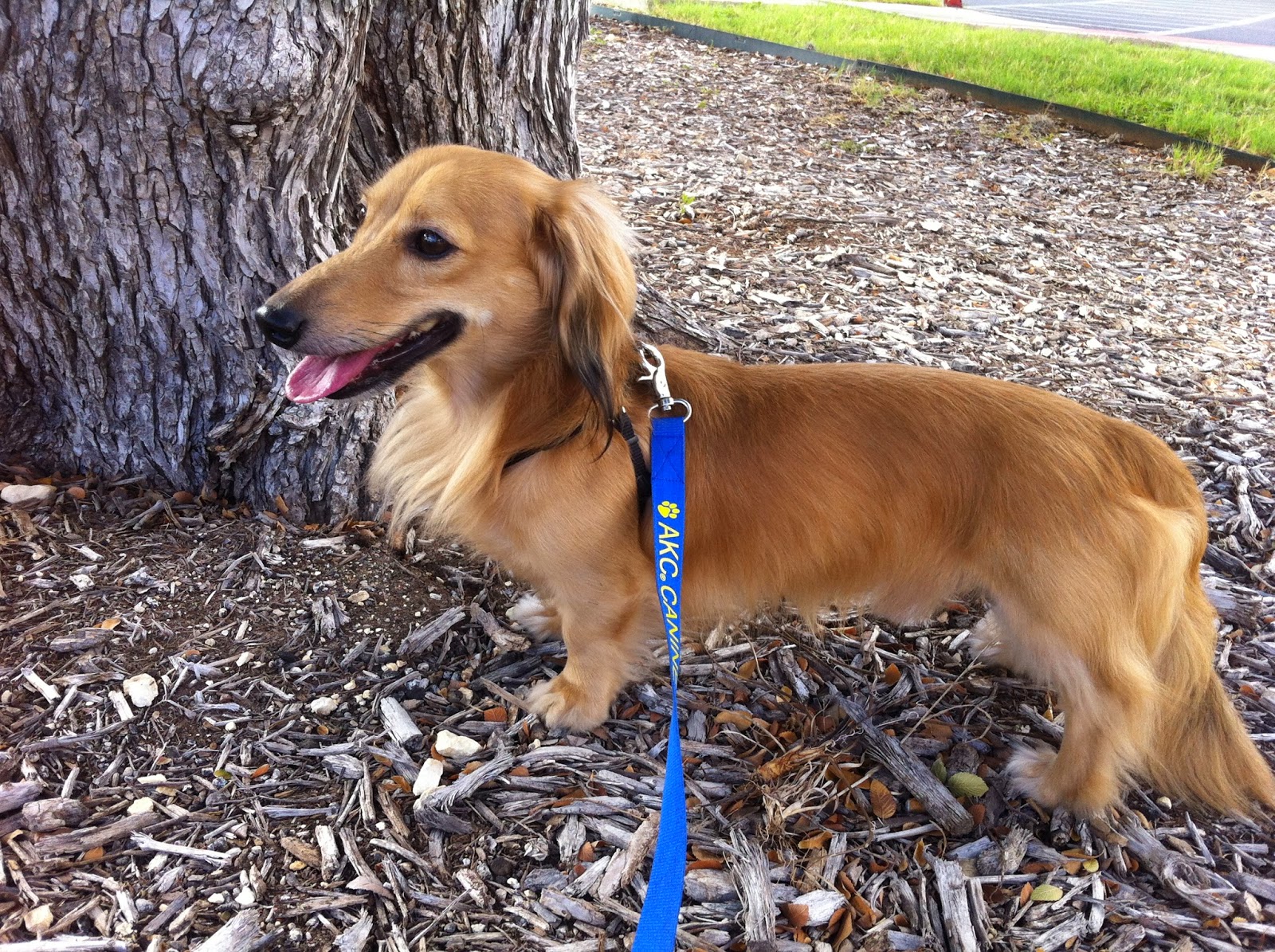 We went in the waiting area and Bentley sat in my lap and then got down in the floor.  He never barked at anyone and was a perfect canine citizen.  Then I headed over to the tire place to get the tires rotated.  It is along a busy freeway and he never flinched about the traffic roaring by as they checked the tires.  As we walked in a man asked what my dog's name was. His next questions were "Does Bentley bite" and if he could pet him.  Of course, as I love for people to pet Bentley as that is a great socialization technique.  I was quite surprised when Bentley, although slowly, went forward to man's outstretched hand! Normally he is shy around men and I'm always worried when we show to a male judge. I told the stranger that I could tell he was a dog person and then we both laughed when he made the oft repeated comment about liking dogs more than some of the people he knew!

The tire rotation took about 40 minutes, but Bentley waited like a little gentleman.  He sat in my lap and then wanted down in the floor. 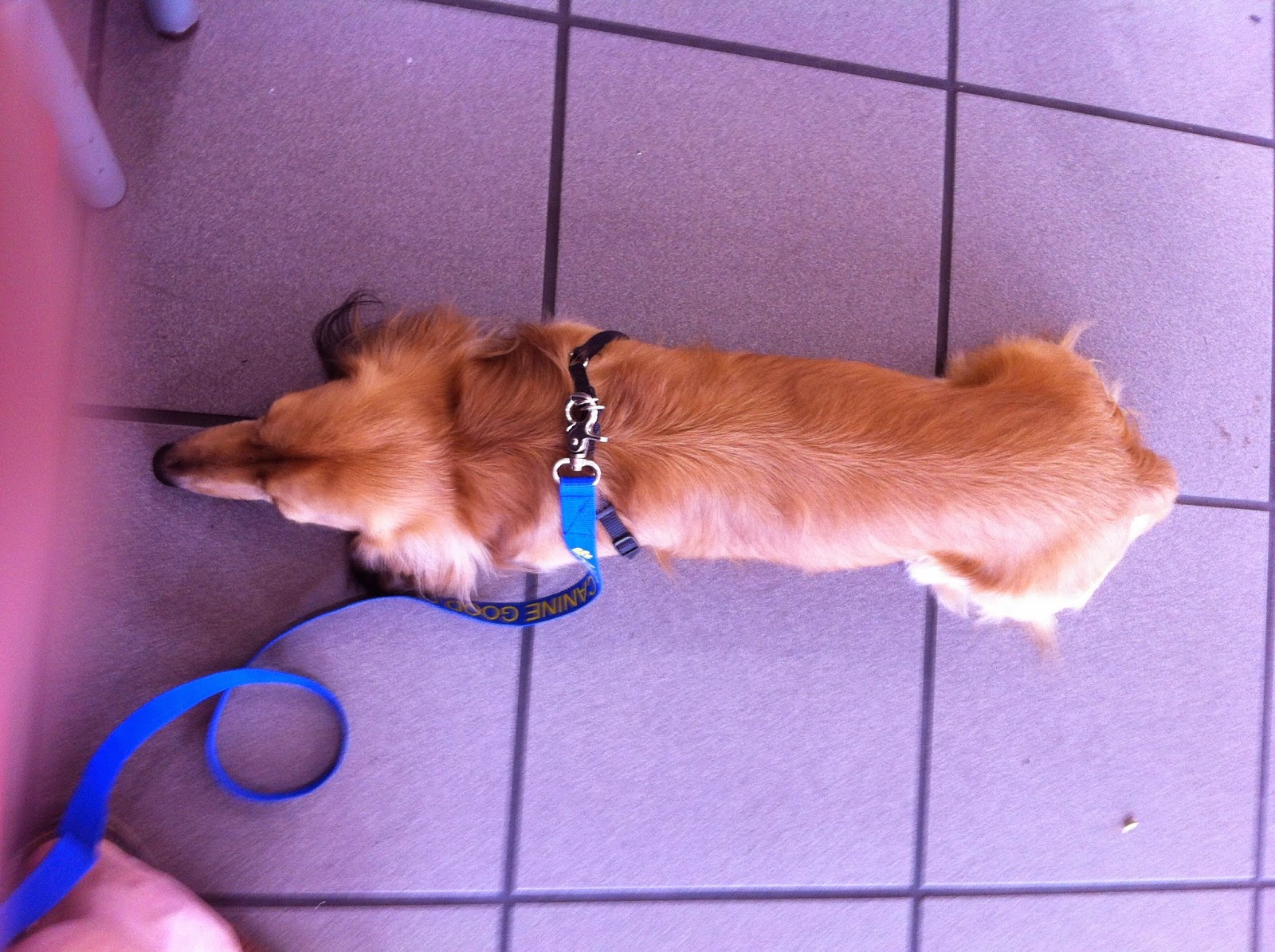 Finally, he laid down and closed his eyes for a little nap.  Oh, the life of a little dachshund boy!
Posted by Beth at 10:12 PM No comments: