Here's what they're thinking... 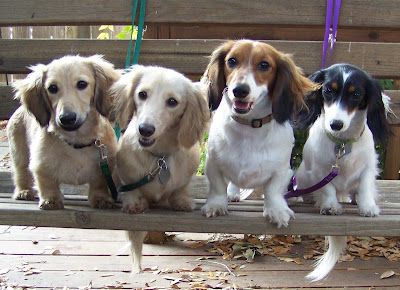 I have this picture in the album that rotates for the desktop background on my work computer.  All the pictures either make me smile or remind me of a place I would like to be.  Today when I saw this picture it made me smile, but then I had to start laughing.  Now I know these fellas well enough that I know what they were thinking while I struggle to get this picture.

Blossom:  Am I in trouble?  Is this time out?
Sawyer:  Can I go now, I need to go chase those squirrels.
Baylee:  Am I going to get a treat because I look so cute?
Bentley: Hey, what's going on here.
Posted by Beth at 9:48 PM No comments:

Saturday at the park

I had planned to go to a guided nature walk at one of the parks this morning; however, it started at 8 a.m. and that was just a tad too early this morning!  So a while later I took Bentley and Sawyer over to the park for a walk. There was a lot of crying and carryin-on by the girls who were left behind, but they will get their turn soon.

I made a few pictures but learned a lesson.  If I want to make pictures of a dog there needs to be just one dog. And for best results the pictures need to be made in the late afternoon when the light is softer.  But just for the record here are a few from today:


After the walk (which was probably about a mile) I took them into the dog park.  They weren't too enthusiastic about being there.  They might have just been tired, but it occurred to me that the last time they were there they weren't overly excited either.  I think it is because they are a "pack" all the time and don't really feel the need to socialize with other dogs.  On previous trips they would run around and explore the area but today they just sat and looked at me like, "what are we doing in this place". I also noticed while we walked that some people would hold their dogs back but others would let their dog run up to meet Bentley and Sawyer.  I held the leads tight in that case, and most of the time they tolerated the other dog but I think they would just as soon not make friends.  Again, I think it is because they are part of a "pack".   I'll try the dog park again but I would just as soon walk the trails myself so we may just stick to that.
Posted by Beth at 9:22 PM No comments:

I had the sprinkler guys out  yesterday to get my sprinkler system up and running again since it is looking like the deluge we had last week may be our last rain for a while.  Here's is the repair from the dogs' perspective:

Without even trying I caught a few cute pictures last week.  While I was making pictures of the small lakes in the back yard the pups posed themselves in a few pictures.  I found it much easier to take these pictures than the ones where I'm trying to get them to look cute!  Sawyer was a little camera shy; he was having too much fun in the water! 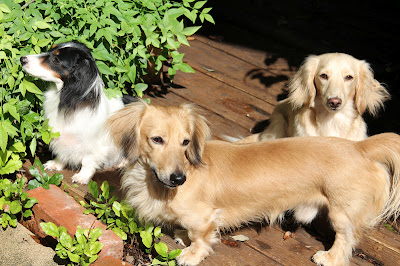 The Botanical Gardens had "Fidos After Five" tonight.  That meant that furry, four legged friends were welcome!  There were so many dogs, all enjoying the garden!  The weather was perfect, no humidity, just right to walk and enjoy the garden in the early evening.  I only took Baylee, since she is so shy I don't always take her places.  But I figured that if she was by herself and got a little shy it would be okay because I could give her lots of attention.  But she really wasn't too shy with dogs or people.  I have to admit it was different to only have one quiet dog to walk with me! 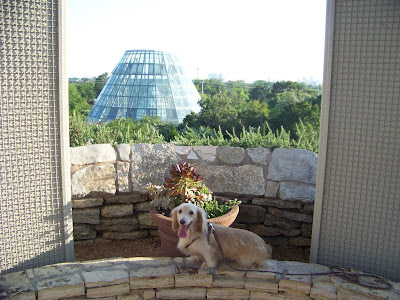 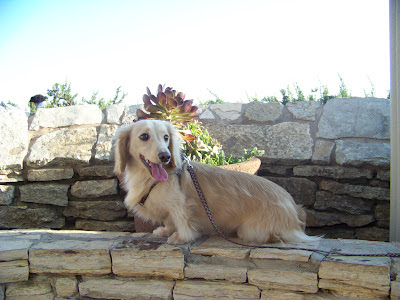 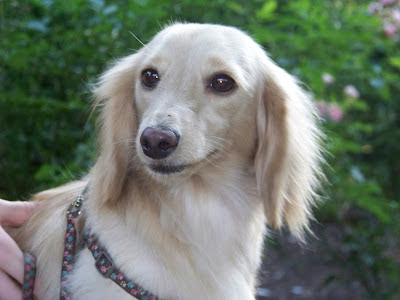 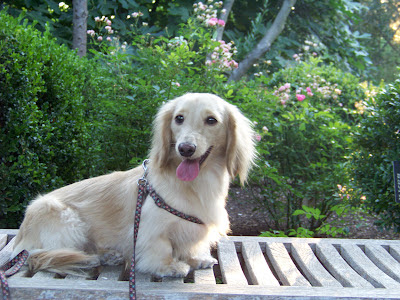 Wheeeee, let's play in the water!

Last week I had 6 inches of rain.  Between Monday night around 10 p.m. and Tuesday evening I had over 5 inches of rain; the rain gauge overflowed!  That makes a total of at least 11 inches, probably more, in just over a week.  So my back yard looked like a series of small lakes.  Normally the dogs do not like it when it rains; they do not like to get their paws wet.  But Tuesday afternoon Sawyer, lover of puddles and small streams, led the pack in to the water. 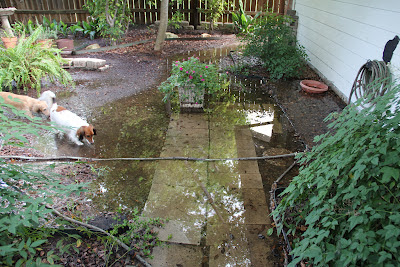 A picture and a video ( that now works!)

I had this spur of the moment inspiration on Thursday afternoon to make a group shot of the dogs.  I used the point and shoot camera which makes great pictures but did not use the tripod, mistake #1.  The second mistake was that I was by myself and didn't have anyone to help work with the dogs (their understanding of stay is fuzzy sometimes, you know).  But I did get a shot or two.

See what I mean?  They are looking at me like, why do we have to sit here, have we been bad?  And Bentley looks huge but it is just the way the camera caught him.  I'll post some more pictures during the week, and I'll at least use the tripod next time.

This afternoon I made this video (see the other blog for details).  Bentley has a deeper, throatier bark than on the video.  What makes me laugh is how he keeps biting Jaydon's back!

I'm still not sure why they did this but Sunday afternoon Baylee, Sawyer and Blossom all crawled into the big crate and started to nap.  Bentley, the dog who never sleeps, just laid down outside the crate like he was guarding them.  Silly puppies, you have had too much weekend! 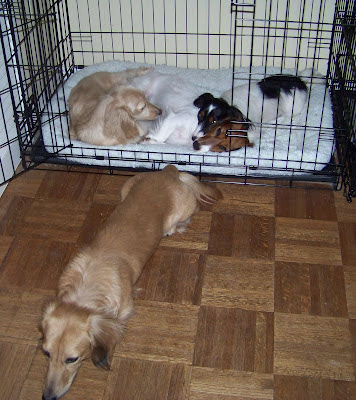 While we were camping we met up with some more dachshund lovers!  I had seen this suburban/tahoe type vehicle cruise by our campsite.  We left a few minutes later for one of our little walks.  The vehicle cruised by us while we were walking then turned around a little circle drive and came back up to us.  This time the passenger window rolled down and a friendly voice called out, " we had to stop to admire your puppies."  Well, of course, a conversation started right up.

The man and lady ooohed and ahhhhed for a minute at the boys and then the man rolled down the back passenger window.  Out popped two of the most precious little dachshund faces I've ever seen.  One was a beautiful little long haired red and the other a smooth black and tan.  They were so sweet, wagging their tails and looking cute!  They had the whole back seat to themselves, a blanket was spread across the seat and they were having so much fun!  I mentioned something about that I needed a harness for my pups and guess what, that's exactly what they had!  The man showed it to me and stated that the dogs did not mind being harnessed at all, that they would just curl up and sleep while they traveled.  They were both females and about 8 years old.  The lady mentioned that they got the long haired dog from a breeder in Lockhart, silly me I forgot to ask who. Not surprisingly she had had dachshunds all her life!

We chatted for several minutes about dachshunds before we said goodbye.  I enjoyed meeting them, much more than the campers whose German Shepherd had gotten loose and was about to take out my dogs when their owner got the dog away from us.  That was scarey!