This week was the observance of two events that happened five years ago and have forever changed my life.  Blossom and Sawyer celebrated their fifth Gotcha Day and Baylee celebrated her 5th birthday a few days later.  Now really, they didn't celebrate anything.  Neither did I!  But in the keeping of the passing of time both of these are momentous events for our little community.
I will always cherish my memories of picking each of these sweet babies up from Splendor Farms.  Just like the first glimpse of a human baby, my first glimpse of each one was priceless.  Blossom and Sawyer were so small that I remember asking if I could pick them up!  I went back for Baylee in August so she was 4 months old; I remember thinking that she was the most beautiful dog I had ever seen!

These five years have been wonderful; how did I ever live without dachshunds in my house?  I thought I knew a lot about dogs, but I know now that I didn't know a thing.  They have taught me so much and opened a whole new world for me.  Grooming, training, showing, nutrition, and doggie behavior are frequent topics for me to explore.

Last week at the show we were discussing a breeder that had to go into assisted living and one of the other ladies had bought out the entire kennel.  I remarked that when the time comes for me to go to a place like that that I will have to find one that takes dogs!  I can't live with out them!
Posted by Beth at 6:07 PM 1 comment:

Am I in trouble? 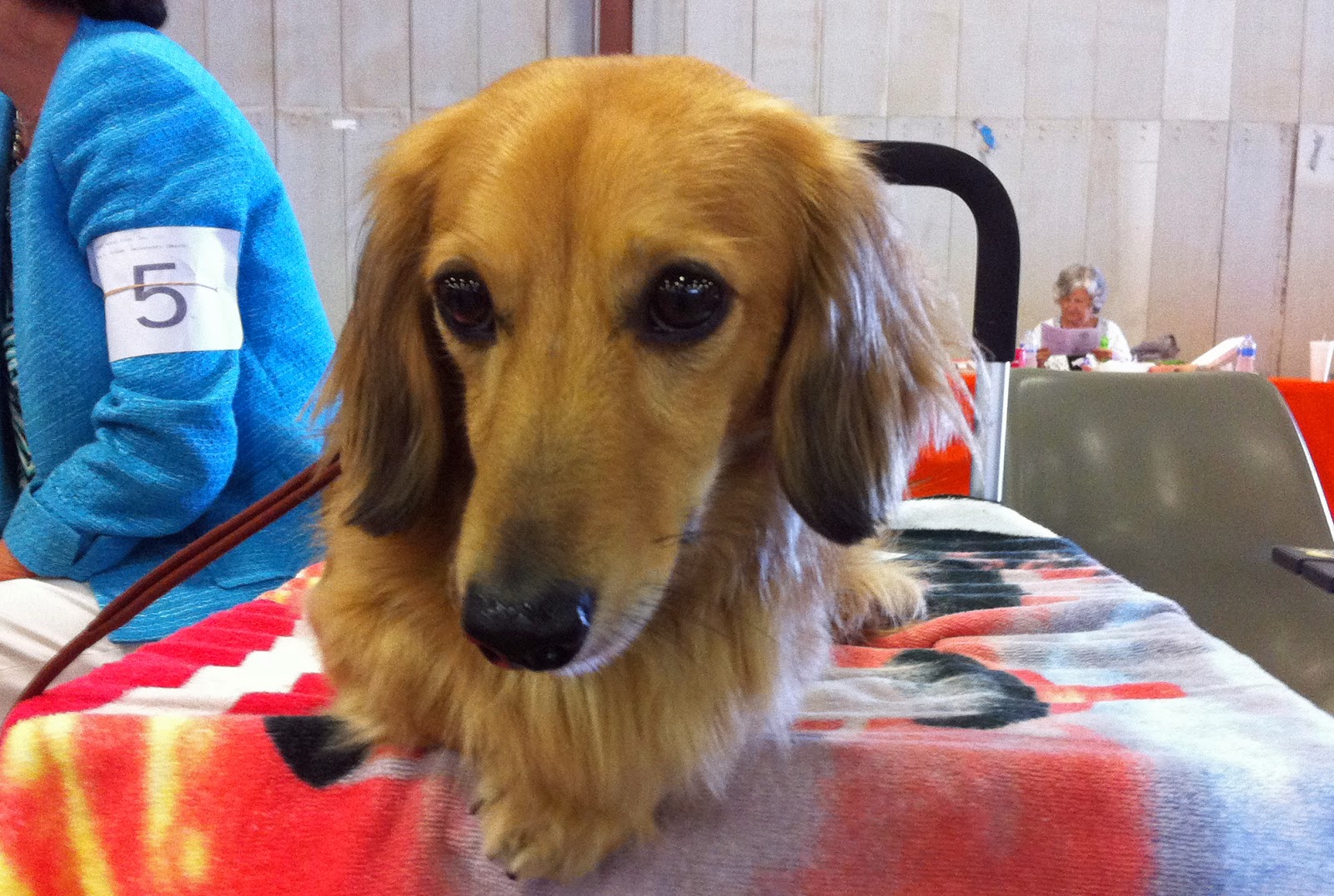 Do I look a little sad here?  My human Mom told me I should be ashamed of myself.  She paid money to enter me in this show.  She took me to a training class last Wednesday and I aced everything!  Everybody was so impressed with me: I strutted around the practice ring and then laid down like a regal hound dog while I waited for my next turn.  We got up early on Saturday morning and drove an hour and a half in the rain to get here.  And, then I messed up big time. 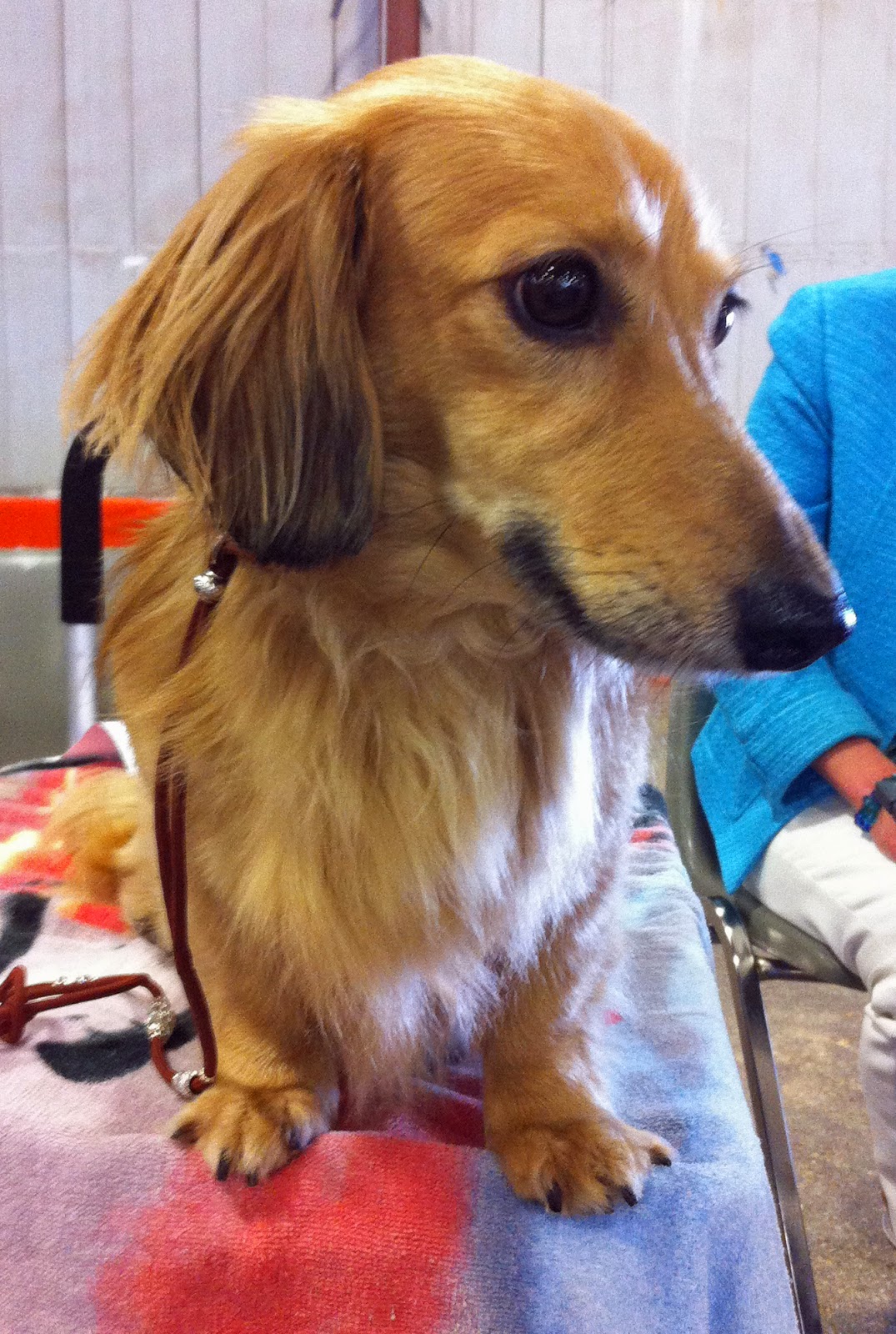 Maybe it was the fact that the weather was lousy or the fact that my hair was really frizzy and fuzzy.  I don't know, really.  But I just didn't feel like walking around that ring.  Mom told me I was sloppy.  And, then when she put me on that table to stack me I just decided that I did not want to do that either.  No sirree, not this little dachshund!  To make matters worse when we went back in the ring for winners dog I didn't do much better.  By then it was too late.  I had messed up.

But that's okay.  My mamma still loves me.  While she sat around with the other dachshund mamas and talked I sat on her lap and everyone adored me.  I even went nose to nose with another big cream dachshund that was on his mamma's lap; how cute I can be sometimes. I messed up in the ring, but I'm still Mamma's Boy! 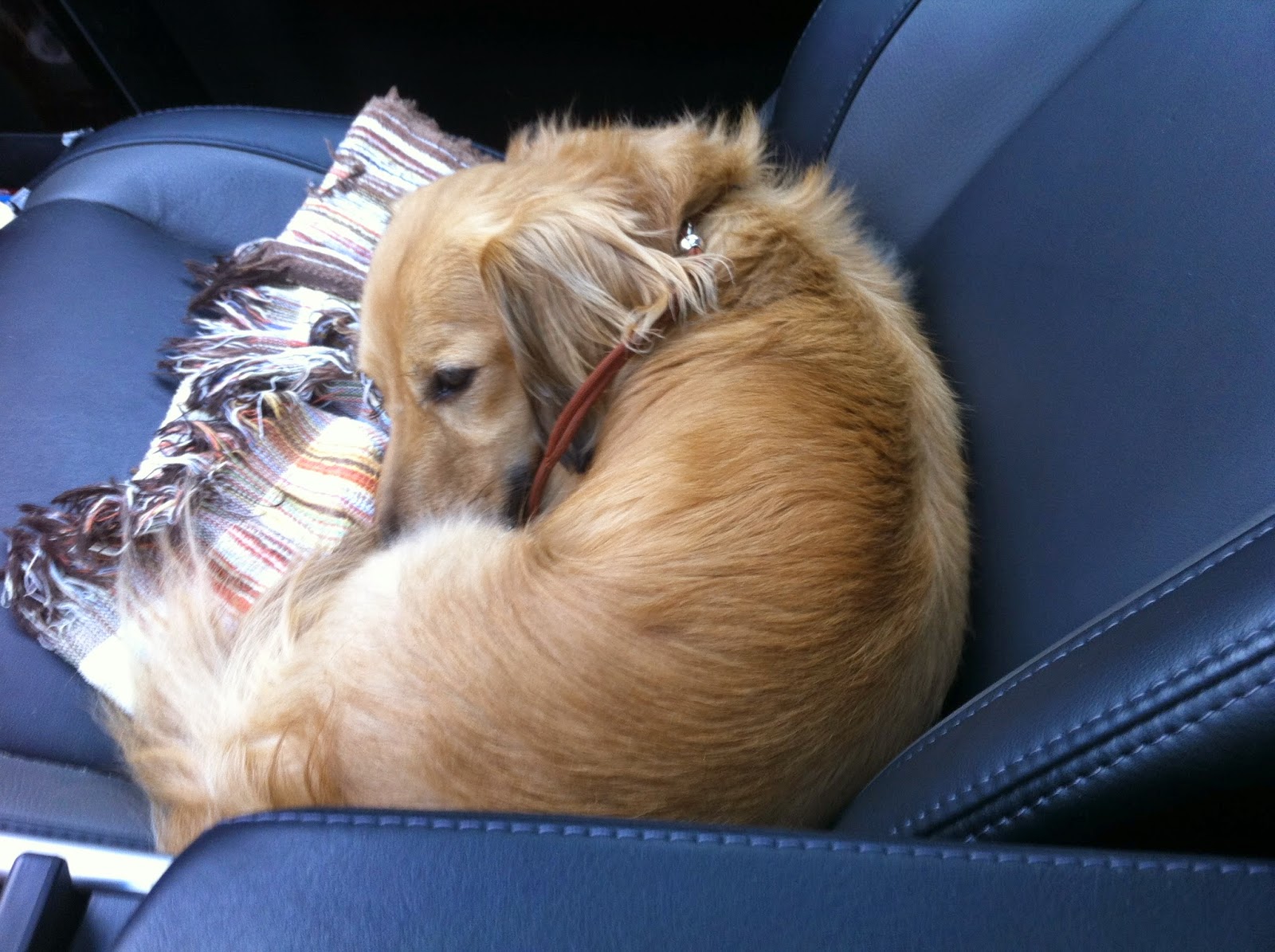 I was really glad to finally get back to our car and head home.  Traffic in Austin was very slow, so Mom snapped a picture of me while we crept along to the freeway.  See, she really loves me!
Posted by Beth at 10:01 PM No comments:

It's that time again

Yes, it's leaf time again down here in San Antonio.  The beloved live oak trees are doing their thing, dropping leaves and their nasty pollen.  It is a mess and this year seems worse that the past few years.  Of course, the nasty stuff is all in my house thanks to four little long haired dogs!  ﻿ 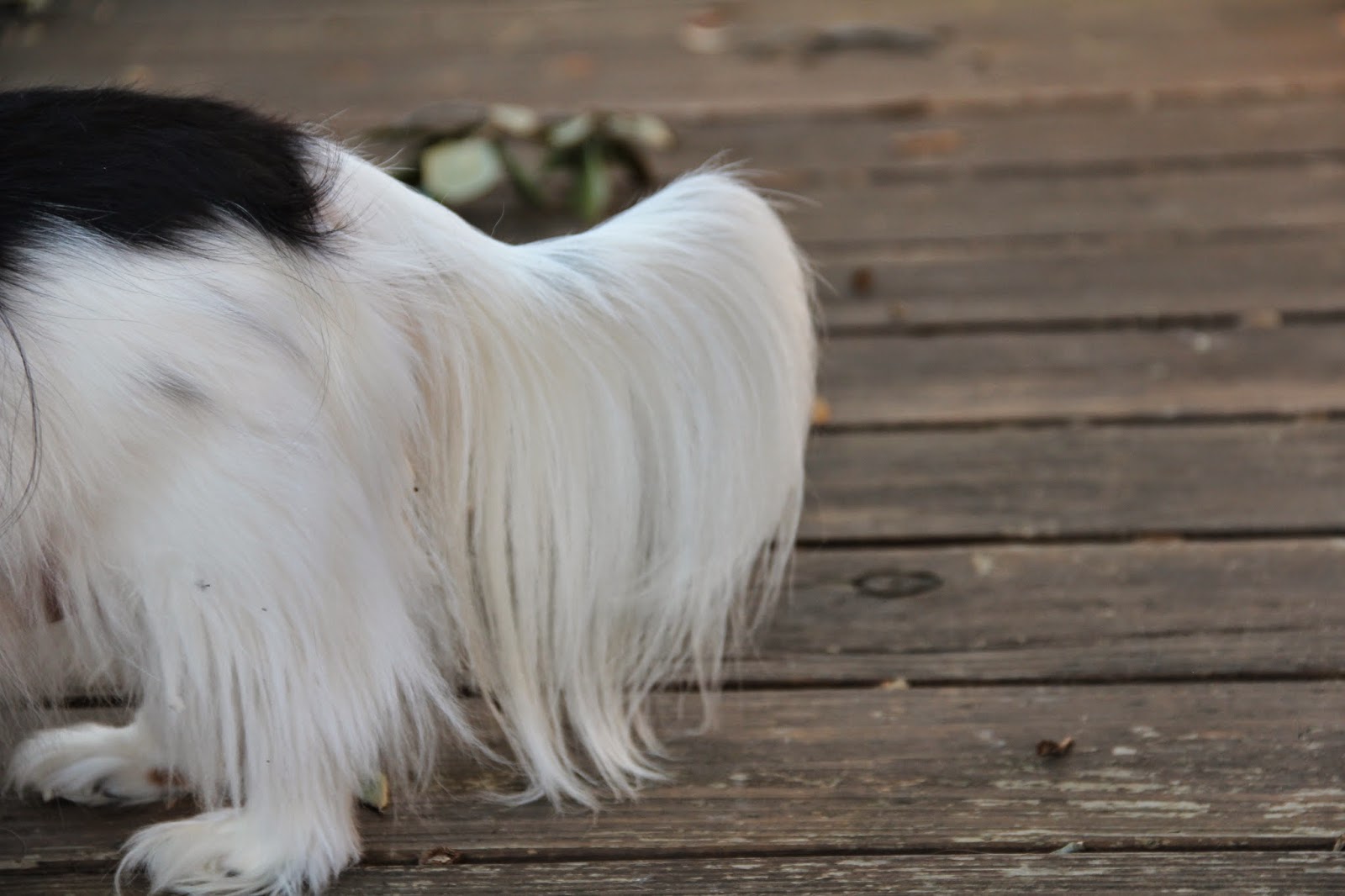 Their beautiful long fur is like a Swiffer sweeper with this stuff and of course, they go out in the yard and roll in it so that makes it worse! But wait, part of the problem is my fault.  During the winter I have been slack about regular grooming except for Bentley because he has had several shows.  I realized last weekend that he wasn't picking up much pollen because his paws and legs are trimmed up.  Look at the picture above - see Blossom's untrimmed paws?  They look like Grinch feet!  And all that hair hanging over her legs just attracts the pollen! 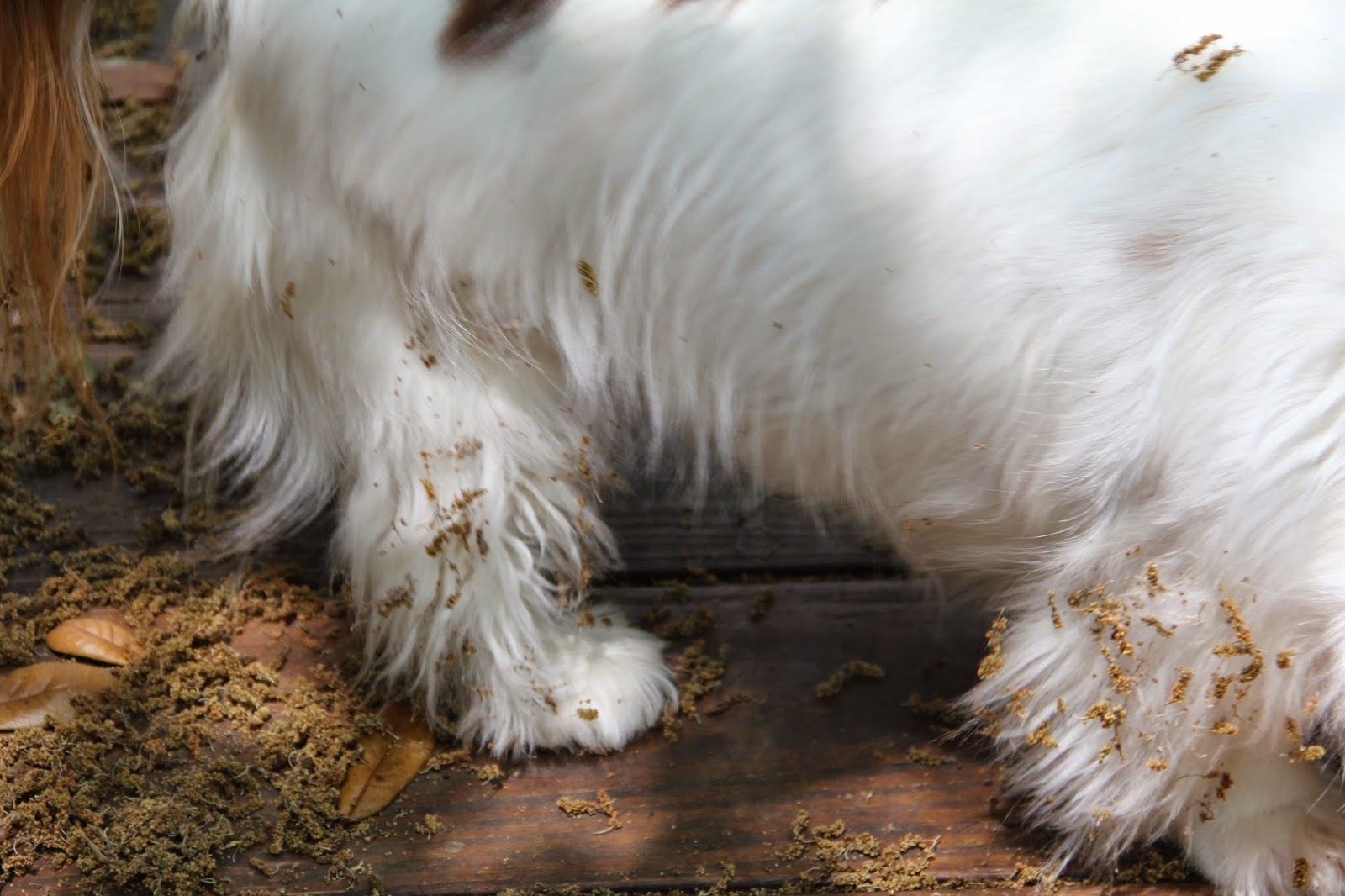 ﻿
Sawyer wants to play in the pollen like it is snow.  UGH! I love my large trees, but honestly, this stuff is just nasty.  If you try to vacuum it it will explode.  The leaf blower just creates a yellow, pollen filled cloud.  And, yes it makes you sick! 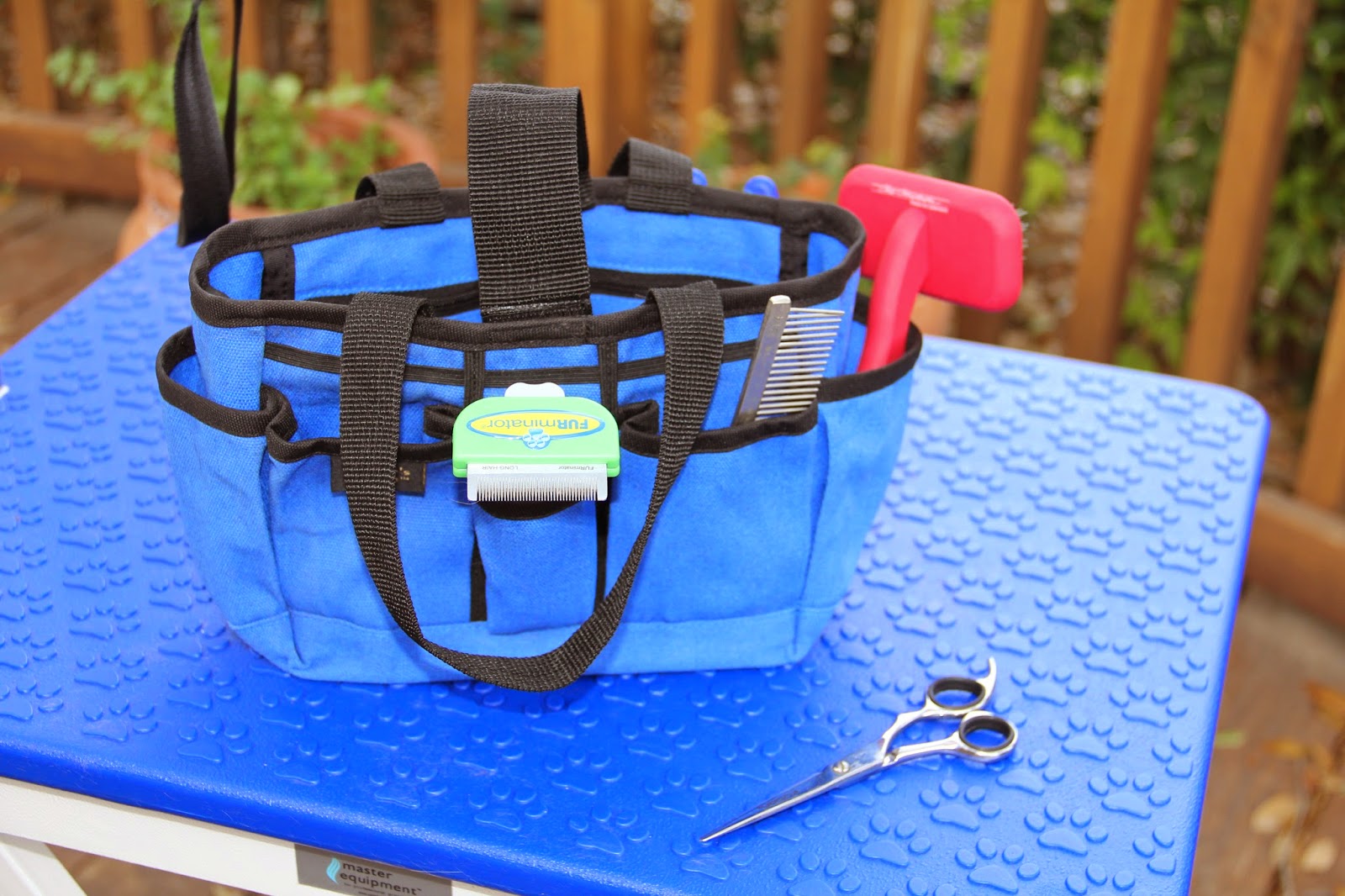 So, with that realization I decided it was time to get serious and get out the grooming table.  Time for some serious grooming. I am definitely a novice groomer, but with 4 dogs I have had to learn.  I bought an excellent book, The All Breed Dog Grooming Guide (4th edition) by Sam Kohl, and I've watched countless videos on the internet.  As with anything, it is the hands on experience that really teaches you!
﻿ 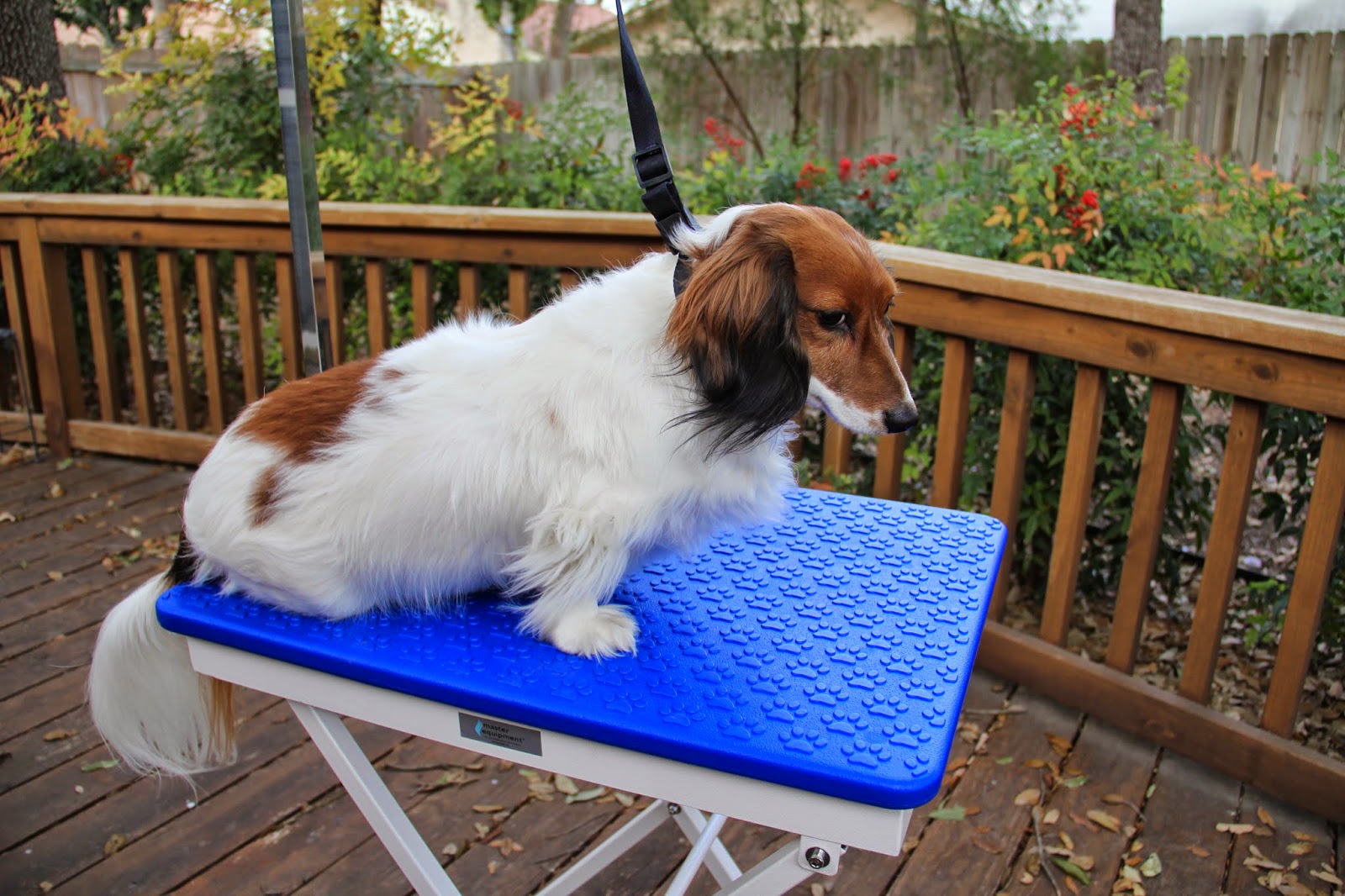 I had actually made this picture of an unhappy Sawyer on the table last summer, but had to share it here.  He does not like anything about being groomed and will hide in the yard when he sees me coming with the table! Ditto with the nail clippers! He's just an adventure loving boy dog that doesn't want all that girlie primping stuff done to him! But, Big Boy, that fur has got to be trimmed up!