News that makes me GRRRR!

Well, there's one thing that gets me writing again and it is getting me irked!  And I was today when I read the articles about Go Daddy! having to pull its Super Bowl ad that featured a lost puppy that manages to find his way home only to learn that he had been sold...via the internet.  If you didn't read the story, the please do!

Honestly, I did not watch the ad, but the description was enough for me.  What irks me is that the people that objected were upset because if featured a pure-bred puppy being sold over the internet.  Their main target was people who breed dogs.  They overlooked the fact that the ad features the puppy being transported in a box in the back of a pick up truck.  I hate to see dogs in the back of a truck and that irked me. So here's what I need to sound off about now:

See what I'm saying?  You check out the breeder, you ask the questions, and you go pick up your little bundle of joy in person.  The whiners about the ad contorted everything to suit their little personal vendetta against pure-bred dogs.  And, no I have nothing against adopting a rescue dog or a shelter dog.

And, yes the ad could have been a little better structured to convey the message a little differently (like showing using the internet to reunite a puppy with its owner or showing people looking at a breeder's website and then showing them with the breeder picking up their new puppy).  I bet Go Daddy! is a little more careful with their next ad.  And, just to note the puppy featured actually is owned by an employee and I got the impression from the article that it is a frequent visitor at the company's office.

And, just for fun here are the pictures of Sawyer and Blossom that were on Kelly's website!  I think they were about 5 weeks old!

Bentley: On the Road, part 2

Traveling with a dog is a little different.  I had thought ahead about lunch and decided that I probably should take a brown bag lunch for myself since I wasn't sure about dog friendly restaurants.  And, I packed the doggie stroller, poop bags, doggie water bottle, and treats (just like packing the diaper bag for those human babies!). I wasn't sure about how to handle the human potty breaks, but I decided that rather than leave him in the car (the temperature was in the upper 40's) that I would just walk him into the visitor center ladies room.  He was pretty cute in there and got a lot of giggles from other lady visitors!  That was the first of his many admiration sessions during the day! 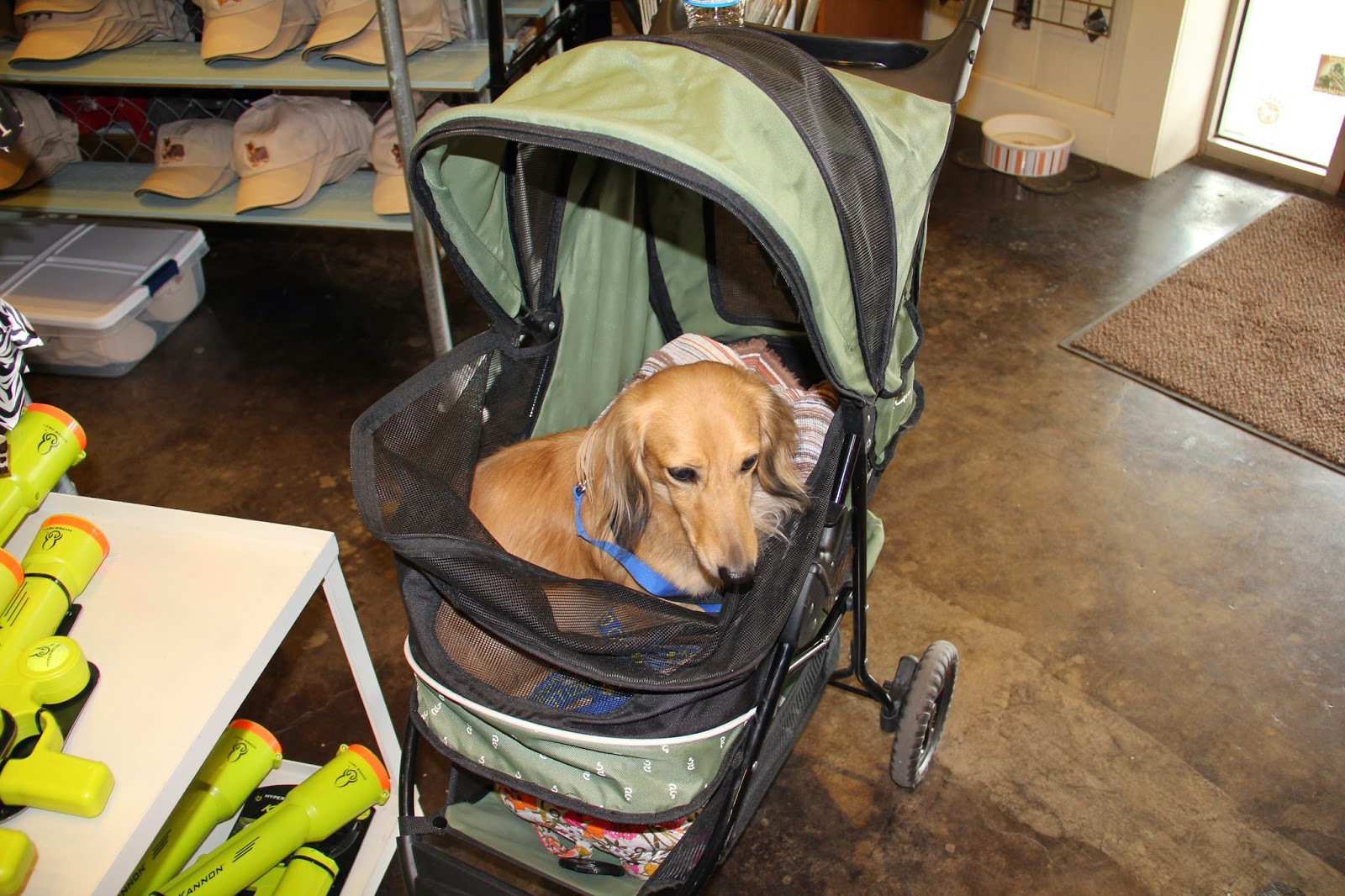 Our first stop was at the Dogologie store for some serious dog shopping!  There were a lot of people in there as well as dogs.  I put Bentley in the stroller because he was nervous about the crowd and the big German Shepherd that wanted to jump at him.  I even zipped up the mesh, just for added security (the big dog did get taken out of the store, thankfully!). It was easier to maneuver around in the store with Bentley in the stroller so that's where he stayed.  Dogologie is a wonderful store and if you are in Fredericksburg be sure to stop.  Even if you don't have a dog, you will be delighted with all their products! 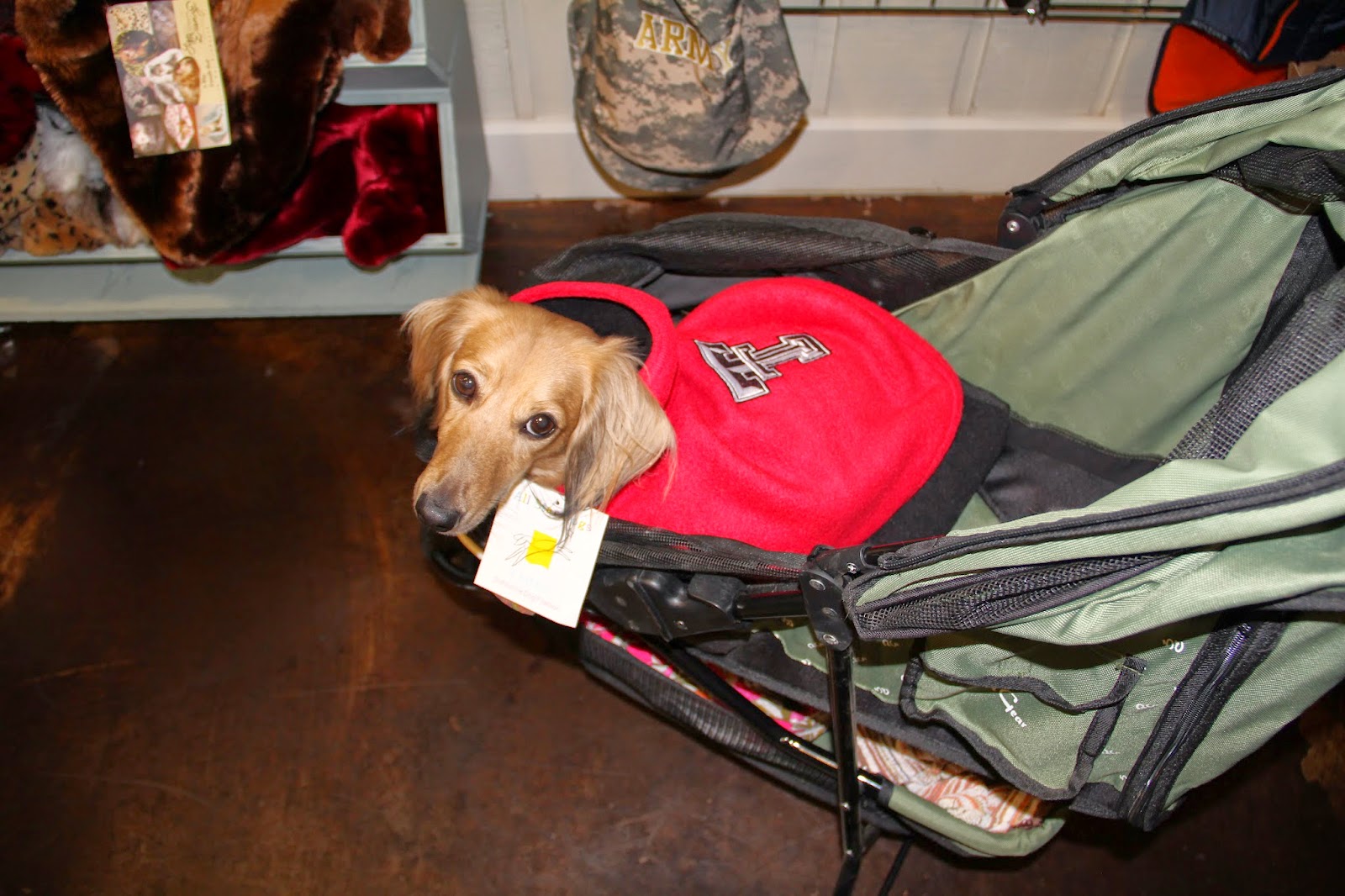 I picked up a cute little dachshund plaque, selected a new collar for Bentley, and a few other little dog things.  I had already had the thought before we left that he would look really cute strolling down the street wearing a little red sweater.  I have never put costumes on my dogs, but after all it was almost Christmas and the weather was cold.  We looked at several that were either put on over the head (no way!) or didn't appeal to me.  Then I saw all the college gear on a side wall - Bingo!  I looked at the orange UT jackets, but the idea of red was still in my mind.  And, after all, my nephew is at Tech right now, so why not a Tech jacket?  We tried it on and even though it was a little pricey I knew we had to have it.

I picked up a plain jacket for Sawyer thinking that having jackets for both boys would motivate me to walk even when it is cold.  It has fleece under a nylon, waterproof top.  However, at this point it will not fit around his wide girth and that has motivated me to walk them as much as possible.  Burn those calories big boy and we'll get you in your jacket! 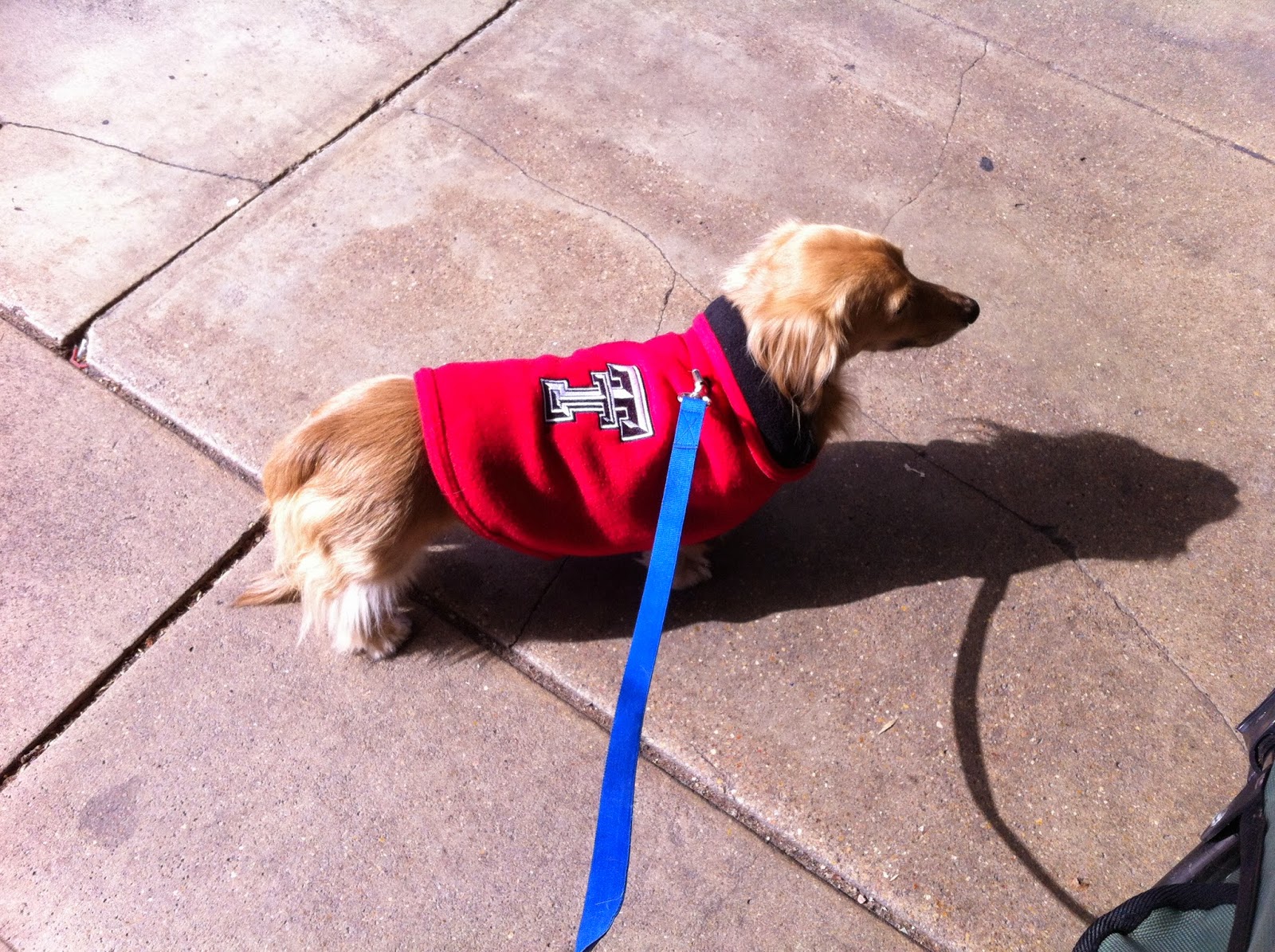 Back out on the street Bentley was warm and ready to walk.  We had so many people stop and talk to us!  I love sharing my dogs with other people.  Many wanted to pet him and so many mentioned that they had dachshunds.  I enjoyed talking with everyone, and isn't he a little cutie?  Who can resist a dachshund that looks this splendid? 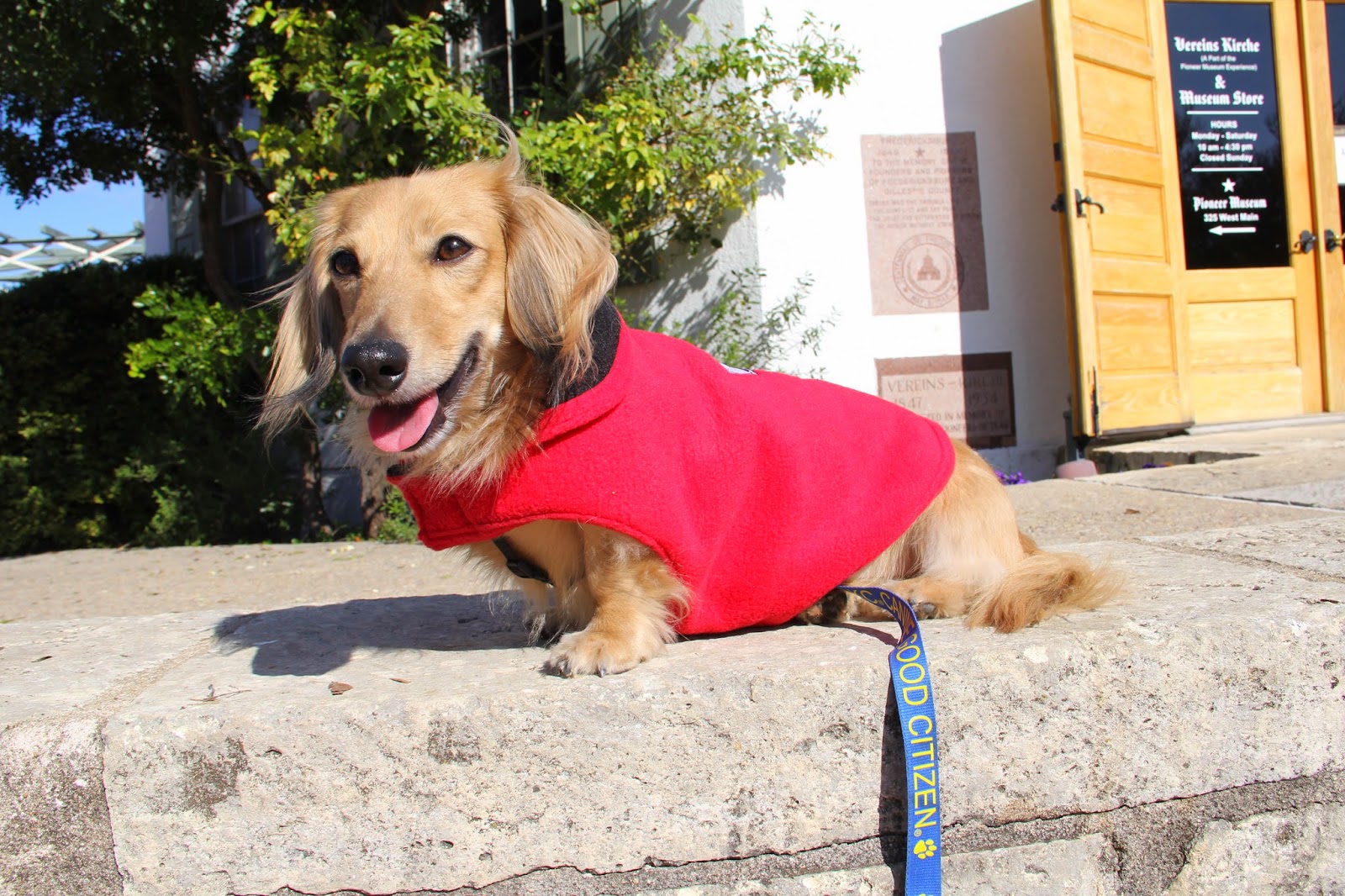 The wind was strong, making it feel very cold.  I choose to sit on the wall around the Vereins Kirche to eat my lunch because it was warm and sunny and out of the wind.  Bentley munched on a few treats while I ate.  We enjoyed sitting there feeling the warmth of the sun and watching other visitors enjoy their time in the Marketplatz.
Bentley enjoyed his day, but he was glad to come home.  I always knew that he is a "mama-boy-dog", but realized that he is also a homebody! He was tolerant of the attention from admirers and followed me around the little shops and up and down the street.   But he would always look at me with a look that seemed to say, "Mom, why are we doing this?  Can we just go home?".