Dog treats at the food truck

Food trucks are very popular right now.  They appear everywhere they can legally park, serving up just a little bit of everything delicious.  Now the fad is spreading to our canine friends.  Yes, that's right, there are food trucks out there serving dog treats!  Awesome!

As the article states, if people are willing to pay $5 for a cup of coffee to walk around with then they will pay $5 for their dog to have a treat.  I think this is a smart idea and if I ever come across a doggie treat truck and have one or more dogs with me I'm sure going to give it a try!
Posted by Beth at 10:10 PM No comments:

Freedom to own a dog

Since we are almost upon the Fourth of July holiday and turning our thoughts to flying Old Glory and celebrating our freedom I thought I would comment on an article in yesterday's local paper that was disturbing to me.  Not only as a dog lover, but as a fierce lover of our American freedom and the laws that are designed to provide justice for all.

The article was titled "Dog owners howling over canine roundup" and was written by Andrew Jacobs of the New York Times.  I tried to pull this up online to link to here, but was unsuccessful.  This story actually is taking place in Bejing.  I saw a similar headline online today, too, so this is beginning to pick up in the news.  I hope it escalates because it is shameful.

During the last 10 days the Bejing authorities have been rounding up dogs, night and day.  "...police have said that they are simply enforcing the long-standing ban on dogs taller than 13.7 inches in the districts that make up the heart of the city."   The ordinance in question states that citizens should not be able to own large dogs because they are "large and vicious".  In several cases they have pulled the dogs from tearful owners arms (not exactly a large vicious dog, is it?) in the middle of the night. Needless to say there are numerous videos circulating around the city as well as cartoons such as the one on a Chinese version of Twitter that shows a terrified dog being chased by three policemen, one of which has a canon.  The caption reads, "how about catching thieves instead of little dogs?"

Here are some excerpts from the article. "Big dogs, the police contend. are incompatible with city living.  'All resistance as well as violence against enforcement will be investigated and dealt with by the police, they said'. Last week they detained a woman who described how the police had kicked to death a golden retriever in front of its owner.  The police later issued a statement saying the woman admitted fabricating the account, a claim that has been met with widespread skepticism."

I can understand the ban, in a way.  It is a big, crowded city with many apartments and few homes like ours with nice, fenced yards for a dog that needs exercise.  But not all large (or small) dogs are vicious.  The ordinance has not been enforced in some time, so people had acquired dogs without realizing that the large dog ban was still a law.  From reading the article I get the feeling that these dogs are prize pets, well cared for and licensed according to the local codes. It is disconcerting to me that the police are cold heartedly seizing dogs from owners and then having such an un-budging attitude about the whole affair.  Any effort to resist will be investigated....scary, right?

We complain about our government, and we do have some ridiculous laws and governmental hang ups, but thank God we have freedom from tyranny.

I think I've posted about this before, but I give the dogs Trifexis for flea and heartworm protection.  It is convenient and very effective on the fleas; however, the dogs do not like the taste of the Trifexis.  I had resorted to using Pill Pockets to get them to take the pill.  That strategy worked on everyone except Blossom.

I had to open her mouth and shove the pill down, ugh!  I've done this many times before on other dogs, but not on a little dachshund with jaws of iron!  Plus my hands and fingers are much weaker than they were years ago.  Not to mention that Blossom has an intimidating mouth of teeth.  It was like looking at a steel trap comprised of a million dagger-like points, really scary!  Plus, I had to do this maneuver outside since she would produce a nice little puddle during the process (revenge).

So, I moved her back to Heartgard and a topical flea preventative.  I thought it would be a real smart idea and that she would eagerly take the Heartgard.  I broke the first one up into several pieces since it was rather large and I knew that she doesn't like to eat anything other than a lady-like little nibble.  I picked her up and offered her the "treat", but she would have nothing to do with it, no sirrreee, not going to take it.  I talked baby talk to her trying to cajole her to take it, but nothing doing.  I even took a piece and gently stroked the side of her mouth thinking she would realize it was tasty.  I finally gave up and put it into a small zip-lock bag.

Some time later I tried again and this time she wouldn't even look at me and wanted nothing to do with the Heartgard.  As I re-zipped the bag I remembered how fond she is of plastic bags.  If she gets access to one she will shred it and the contents;  I've lost or almost lost several quilt patterns due to her love of plastic bags.  So I thought, why not give her the pill and the zip lock bag?

A few minutes later I called her to me and gave her the open bag.  Ta da!  It worked; she stuck her little nose right in and went for the Heartgard chunks!  Of course, I took the bag away before she got any further, after all I don't want to encourage her shredding habit.

Last weekend I went to an out of town graduation.  I had a great weekend, but with the four dogs in my household I did have to shell out the money to board them.  I don't mind because I know they have nice kennels with runs and I know that they are well cared for (there is even a family that lives on site behind the kennel, so I feel secure).  They stay two to a kennel, so they don't get lonely.

This time there wasn't quite so much of the pathetic looks I usually get when I check them in.  Blossom didn't even leave a puddle anywhere, either!  I told them good bye and left them somewhat wagging their tails.  Picking them up resulted in the usual chaos of trying to get them hitched up and ready to go.  The kennel staff and I laughed about my having the vision of coming to pick them up and they all sit patiently while we put their leads on them (ha ha)!  I definitely know they are happy to see me!

Later Sunday evening I had sat down on the sofa.  I didn't even realize it for a while but Bentley had laid down right next to me and put his big dachshund muzzle on my leg.  When I reached down to pet him he rolled those big brown eyes up at me and I knew there was just nothing but doggie love in them.  I knew what he was thinking, "I love you human Mama and I'm so glad we're home together again".  You just can't beat that, can you? 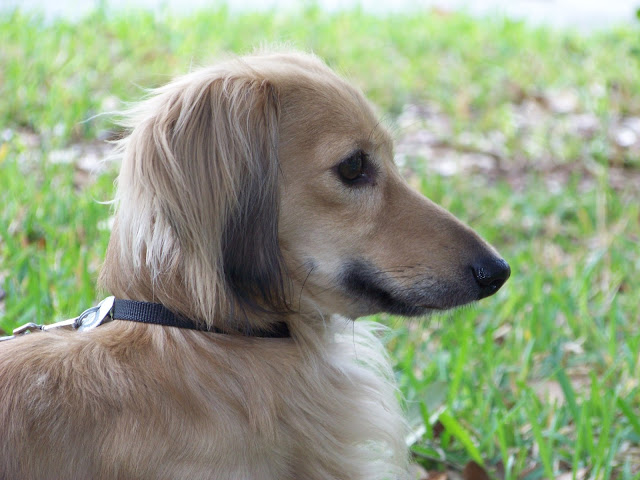 Congratulations to Bentley!  He passed his Canine Good Citizen test today, and he passed with flying colors.  I am so proud of him, too!  It was like everything clicked with him and he did great!

I was worried that he would just totally blow me off, like he sometimes does.  But he did everything just like he was supposed to do.  We all commented that having trained him to walk in the show ring was a plus, and he strolled around on the walking part like he was in the ring!  I was worried about the down command.  I had already talked to the evaluator before we started because I knew that Bentley wouldn't do it.  The evaluator was really kind and explained that even if I had to gently coax him into the down position he would pass Bentley.  The idea with CGC training is to be able to control your dog; so if you are able to gently persuade him to do something that shows you have control.  I did have to make him sit and then pull his front legs forward until he was down, but then he stayed very comfortably in the stay while I stepped away.

The instructor and evaluator reminded us to keep training, that it is an ongoing process.  The evaluator made the comment that dogs are just like children, they need discipline and structure in their lives.  I know that Bentley is a better dog now that we've embarked on the training journey.  I think it is time for the others in our little pack to do some training, too!

I'm definitely going to spend the money to order him a certificate and to have the title "CGC" added to his registered name.  Maybe buy him a CGC leash, too, since he did such a good job on his test!
Posted by Beth at 10:23 PM 2 comments: