I found something really useful and want to share it here.  I don't endorse products, but I do share products that I like and think other dog lovers would find interesting. 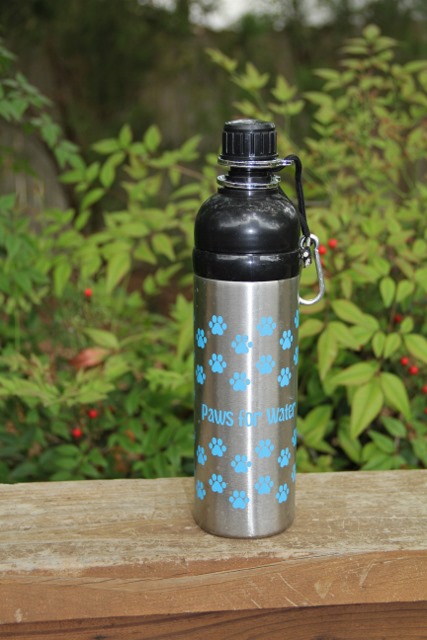 This is a Paws for Water bottle.  I had seen these in the training facility where I take Bentley and had looked at them several times.  I think I had read somewhere that someone had tried to use this (or a similar product) on their dog and it didn't work too well.  I put off buying one, but then realized that I had to have something to give the dogs water when we were out and about.  A water bottle and a bowl takes up too much space in my backpack.  After looking at these several times, I decided why not give it a try. 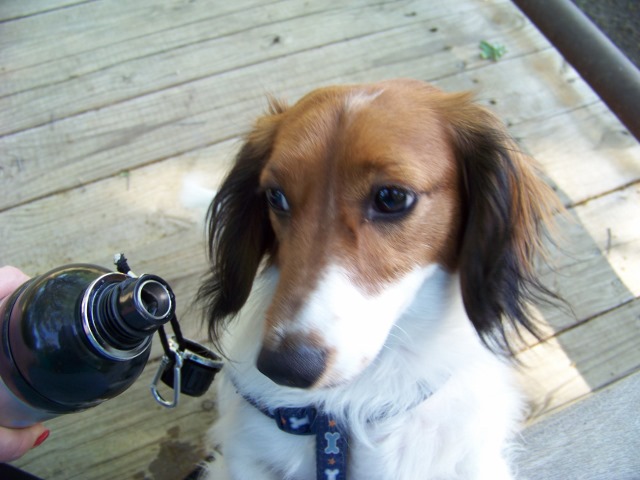 This was Sawyer's first try with the bottle.  It was not a hot afternoon, we had gone to walk the trail in a nearby park.  I tried to get him to drink a little, and he just wasn't interested.  I found trying to hold the bottle and make a picture to be a challenge!

I wasn't sure how to train them to use this, but there wasn't a problem at all.  I took it along on Sawyer's Friday Adventure .  After our walk on the trail he was ready for a drink, so I pulled out the bottle.  At first he ignored it, so I decided if nothing else I would let the water dribble out and maybe he would just drink from the asphalt.  That was the trick, just letting it dribble.  As he started to drink I remembered that he loves to drink from the running garden hose!  It worked well and he had the tip of the bottle in the side of his mouth with the water running right in, just like with the garden hose! I don't think the others will have a problem learning how to work the bottle. 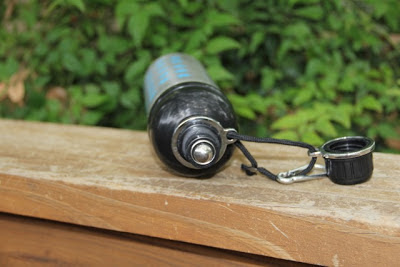 The tip of the bottle has a roller ball that allows the water to come out slowly and cover the ball or just dribble out.  The top section of the bottle comes off so you can wash the inside of the bottle.  There is also a clip so you can attach the bottle to a belt look or backpack if you want, but I wouldn't want a stainless steel bottle filled with water hitting my leg or back.  This is a great find and I'm looking forward to using it this summer.
Posted by Beth at 9:50 PM