When I work at the dog show at Reliant Center I have to be at my ring at 7:00 a.m., ready to start setting up for ring opening at 8:00 a.m.  Yes, it is an early start, but both years that I've done this I stayed at the hotel next door to the facility and saved myself commute time with just taking a short walk across the rather large parking lot.  As a bonus to getting there early I get to walk through the grooming area and witness the pre-show getting the dogs ready routines.  I learned not to make eye contact with the dogs, since I can't pet them!  But it is fun to see the different breeds getting bathed, dried, trimmed and fluffed up.

The first morning this year I could see up ahead of me a dog that appeared to be walking in the air.  What is going on, I wondered.  As I got closer I realized that the dog was on a treadmill, a doggie treadmill.  I slowed down to take a look.  The dog was just trotting along, wagging his tail as if he was on a morning walk outside with his owner.  The next two mornings I would pass this same grooming area and there would be a dog on the treadmill, just trotting along. Now, I had seen the dog whisperer guy (Cesar Millan) use a treadmill on one of his shows, but it was a regular human treadmill.  This treadmill was smaller and clearly designed for a dog.

After the first day's work I ventured into the vendors' area, and found two different vendors demonstrating and selling dog treadmills. 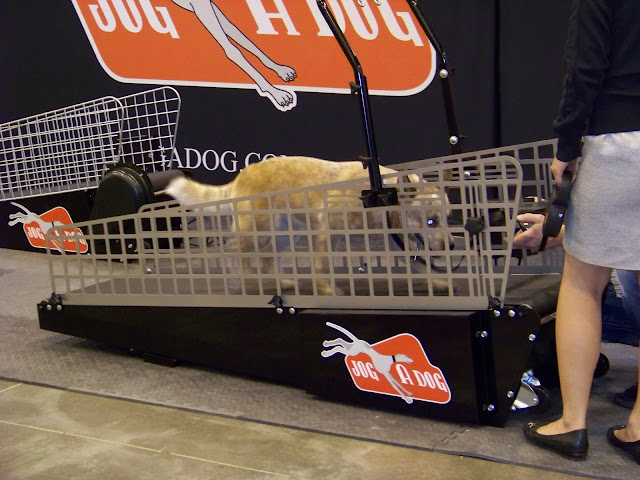 This dog walked right up on the ramp and started walking, so I suspect she had done this before. 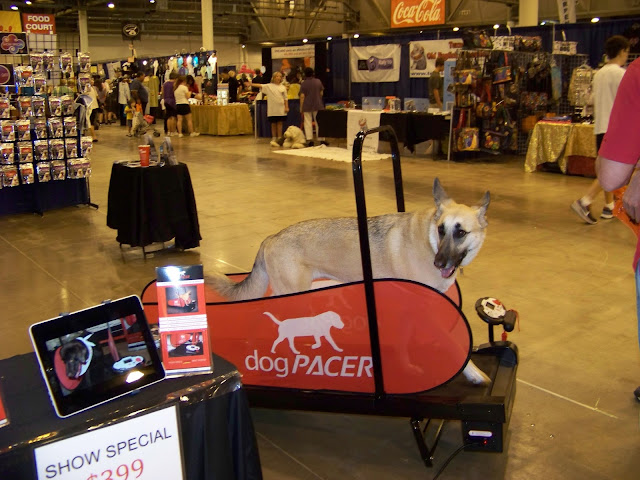 This big girl was a little timid, but the salesman knew how to reassure her and how to coax her along until she was comfortable walking on the treadmill.  She was a little slippery on her feet in the beginning, but by the time I made this picture she was walking just fine.  Her owner had even taken off her lead, that's how relaxed she was.  Yes, the sign was correct this model was selling for $399. I didn't ask, but I'm pretty sure that each model collapses for easy transportation.

The background of this picture gives a glimpse into the vendor area of the show.  I managed to resist the Laurel Burch bags hanging just behind the dog.  The next booth was for the Old English Sheepdog rescue group and that is an OES laying in front of the booth!  There is dog stuff and people stuff at a good show, enough to keep you busy looking around for quite a while! 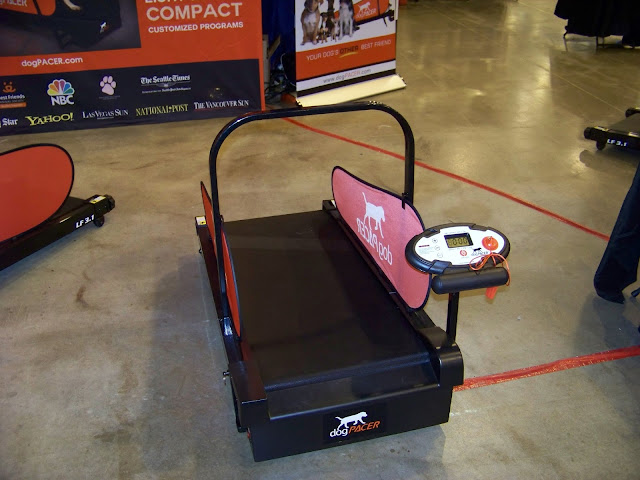 I don't have room in my house for one of these, but since it has been 105 degrees outside everyday this week I wish I did so the dogs could get some exercise!
Posted by Beth at 9:49 PM