Mr. Bentley started his obedience class last Wednesday and tonight we had session number 2.  It is a cross between obedience and training for the Canine Good Citizen test. I could have done this training on my own, but need the motivation of a scheduled class to keep me focused (yes, the trainer has to be trained so to speak).  I know the instructor from Stewards and from the ring manners class that we attend from time to time; Bentley knows him, too, so that was a plus for me.  We are supposed to work for 10 minutes a day, but last week I missed two days training (my fault).  But tonight Bentley did fairly well with only occasional dorkiness.  We tried a little rally course and, let's just say we tried and leave it at that!

Our first training step was walking on a loose lead by the handler's side.  No problems with this because he was already doing that as part of showing.  He knows to follow with me and turn as I turn.  The only difference is that he is wearing a collar and not the slip on show lead, so that makes it a little different for me.  He isn't perfect in the ring or on the training floor, but does well enough that I'm pleased. He also does well with the halt command, but that is mostly from knowing how to follow my motions and not really from the verbal command.

Second step was to learn to sit on command.  He somewhat knew this, but still looks at me like, "why do I have to sit?' He needs some more practice and he'll be fine.  The down command is another story and I'm not sure what to do.  I remember from Blossom & Sawyer's Puppy Kindergarten class that they had problems, too, and the instructor said it was a "daschund problem".  Hmmmm.

We have also worked on stay, with some success and some failure.  Tonight we add the recall command.  Bentley knows to come when called, but tonight it was like he had never heard the word.  I got the "I don't want to do that" look from him several times tonight! 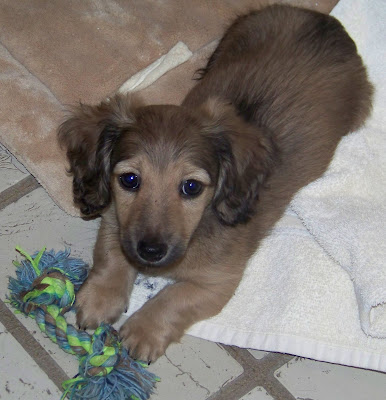