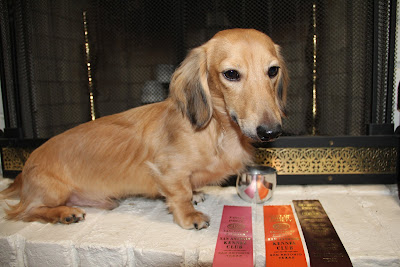 Bentley competed in a local "B" match today.  It is a show that isn't a show, so to speak.  A little more than a match but not a full show.  He was the only dachshund of any kind so obviously he came home with ribbons and a small pewter cup.  He went in for best of group against a basset hound and got second.  I think the judge was prejudice or something, how could he give this good looking dog a second place?
Any way, it was good experience for both of us.  I'm still not pleased with how he's doing, but in all honesty I haven't worked with him like I really should.  And he needs to be socialized a little more as he is very leary of people.  There is a show in Austin next month so we need to get busy.
He was a little reluctant with this picture, I just noticed that his head looks huge but that is just because I was super close to him with the camera!
Posted by Beth at 9:33 PM