Dog Park/What Was I Thinking

Saturday morning I headed over to one of the dog parks with all four dogs.  Yes, what was I thinking...no I think it was that I wasn't thinking.  We got there and headed down the trail to the small dog park, so far so good.  There were several dogs already there and they came running up to greet us.  That was they beginning of the trouble.  My dogs felt threatened, just didn't realize that the other dogs were welcoming them. I got them all calmed down before letting them off the lead.


First problem child was Blossom.  She had never been before, and just couldn't deal with the dogs.  She was growling and tried to snap at one dog. I picked her up and held her but she was just barking her head off no matter what I told her.  Not good.


The other dogs were starting to run around a little and have fun.  But Bentley decided it would be fun to chase the other dogs and bark wildly.  He was just playing, wagging his tail the whole time.  I apologized to the other dog owners who each casually replied, "oh it's ok, he's a dachshund." but that did not make me feel any better.  I think it was just the male dog in him really, not the dachshund.  He's been before and always been good, but this time he was on a tear.


After about 10 minutes of this I was ready to go.  So we hitched back up and walked down the trails.  This was exactly what we all needed.  We took a loop that was 1.2 miles and then took a little detour off the loop to the scenic overlook (scenic? well maybe, maybe not).  It was a cool morning and we had just a wonderful walk.  Several people stopped to talk about the dogs and admire them.  The morning was salvaged, hooray!  I made a promise to take them to walk the trails more often.

I took the camera but only got one picture before the battery died.  This is a little doggie playhouse in the small dog park;  I had the idea it would be cute to get all four up there and make a picture..what was I thinking? 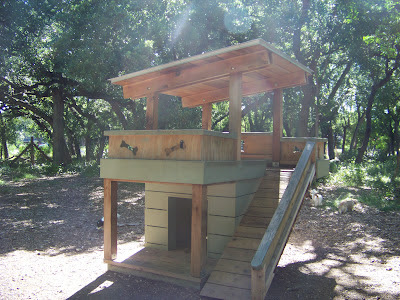