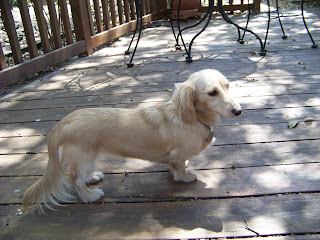 Baylee, March 12, 2011
Jaydon and I went to a dog show this morning.  There were 6 long haired dachshunds that competed while we were there, one of which was a cream (not sure what kind).  As I watched them in the ring I realized that MY DOGS ARE BEAUTIFUL!  I'm not predjudiced, I'm basing this on honest observation.  The show dogs were nice dogs, but I realized that my dogs really are beautiful and their conformation is perfect.  If Baylee had been in ring I think she would have won, hands down.  Her coat is thick and soft and getting longer and her muzzle is perfectly dachshund, too.  She has her head turned in the picture above but when she looks straight ahead she is a perfect dachshund.  I really want to get Bentley in the ring as I think he's a winner for sure.  But show or no I realized that I have four beautiful dachshunds, thanks to Splendor Farms!
Posted by Beth at 9:28 PM