Jaydon and I went camping this weekend and took Sawyer with us.  He had such a good time!  He is so easy going and just takes everything in stride.  I'm sure that at times he was confused about what was going on but I think next time he won't give the adventure a second thought.  The funny part was when we got home, he really missed his playmates and kept looking around and then looking at me, like "where are they?" 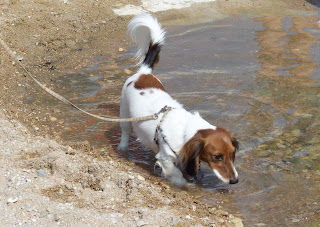 He loved the water and wasn't the least bit afraid. 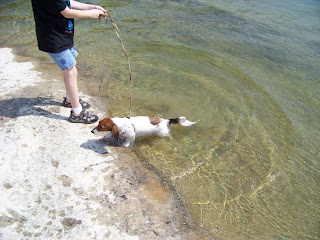 Here he is after a brief swim.  I wasn't fast enough to get the camera turned on and catch him in the water.  At Pedernales Falls we climbed rocks and he was scampering up the smaller ones with ease.  I had to pick him up several times to lift him up or down on the large rocks.  Yuk, he was wet and dirty! 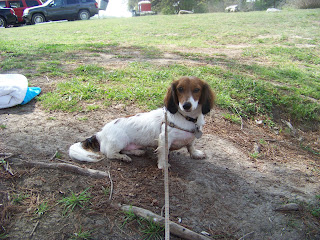 We walked across a small damn at Blanco and it was a little scary for me because I was trying to keep my balance and keep him from licking and greeting the people sitting on the edge of the damn!  The picture above shows how dirty he was...I was worried about having him in the tent and even joked about sneaking him into the showers!  But by bed time he was dry and all the mud and debris had fallen off and he didn't even stink. 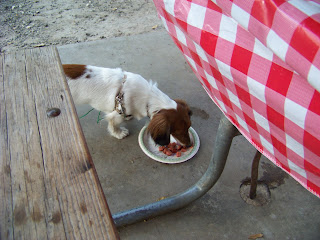 We cooked hot dogs for our evening meal.  I had an extra hot dog and wasn't going to waste it.  He hadn't eaten his dog food and I figured he deserved a treat so I did something I have never done with these dogs...I fed him the hot dog.  It was all beef so I told myself it wouldn't hurt him.  He LOVED it and licked the paper plate clean! 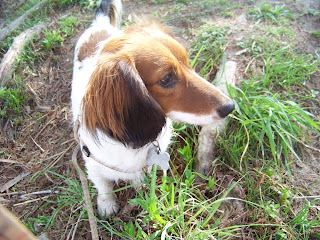 Another picture after crossing the damn and getting wet. 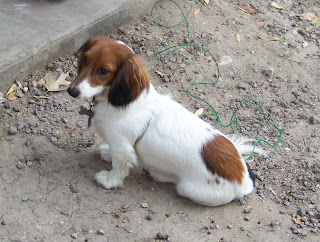 A thunderstorm hit just as we were going to bed.  At one point we briefly got in the car, there was no wind but the lightening was fierce and Jaydon was scared.  I ran to the car with him in my arms, but he was very unconcerned.  He laid in my lap and dozed while we sat in the car.  After we got back in the tent he laid down between us and went to sleep.  This was another first for him because I've never let these dogs sleep with me.  He did bark a couple of times right after he went to bed but I think he was hearing the campers at the next site that were dealing with the storm, too.
Posted by Beth at 10:24 PM