Bentley and the crate 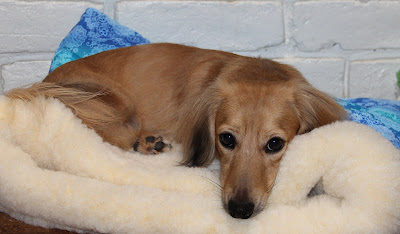 On Saturday Bentley showed around 10 a.m. and I had to start steward work at 11 a.m.  I knew I wouldn't be done until around 4:30 p.m. and would have to crate him while I worked.  I can leave him briefly in the little green carrier, but it is not really large enough to leave him for any length of time.  So, even though I had told myself I wasn't spending any more money on dog stuff, I bought a collapsible 24-inch wire crate.  I have a 24-inch crate but it has to be assembled and it is a pain and usually the door won't latch; the collapsible crate is much better!

I can't have him with me while I'm working, but I couldn't bear to leave him unattended for that long in the grooming area.  He would have thought I had "abandoned" him and flipped out.  Sounds silly, but dogs have feelings and emotions.  I know a lot of people leave their dogs crated in these areas during the day and even overnight, but I can't do that to my dog.  So I parked his crate (on the cart) in the aisle between the rows of rings.  This area is a prep area for dogs entering the ring and the rules state that dogs can't be left in this area after the competition ends for their breed.  However, I was willing to try it.  I put him behind me so I could glance over my shoulder and watch him.

At first he stared at me just like in this picture above.  Mom, why are you doing this to me.  At one point I heard him scratching and another time or two he was barking and I had to tell him to hush.  The ring had a short break so I got up to go to the bathroom.  I stopped to pet him through the crate and talk to him first.  As I did a lady came up to me and asked me if Bentley was my dog.  I remembered that several times when I had glanced at him I had noticed her talking to him.  I told her, yes he was mine. She had been worried that he really was abandoned!  I chatted for a moment and thanked her for her concern

The last two breeds to show were German Shepherds and Australian Shepherds, big dogs.  I heard Bentley barking just as the German Shepherds were starting and looked around to see a guy letting his 2 dogs tease Bentley.  I'm not sure if it was intentional or if he wasn't paying attention.  I couldn't leave the table, but after a minute or two I was ready to just yell out at the guy to watch his dogs.  About that time he pulled them away.  Grrrrrr!

Bentley just couldn't deal with the big dogs (can't blame him, really) so as soon as the ring next to us was done and I had a chance to get up, I moved the cart over next to it.  He sat quietly until my ring was done and at that time I got up and pulled him over to me.  While we were closing the ring one of the men who had showed an Australian Shepherd came over to me and said that he should have realized that Bentley was my dog by the way he was staring at me!  He said he had been watching Bentley and that he had never taken his eyes off of me!  We laughed and then I asked him, "do you think this dog is spoiled?" and the other steward quickly replied, "no way".  There was lots of laughter from everyone!