I've just spent three days at the dog show here in town.  I showed Bentley twice and worked as a Steward twice, too.  Since I've been going to the shows for the last year I am familiar with most of the vendors and the stuff they sell, but I still like to look.  I felt guilty because my first purchase was for me; a Laurel Burch bag and a scarf (had to have, right?).  Yesterday I needed a crate pad to go in the new collapsible crate that I bought to use for Bentley.  There were several vendors with pads so I shopped around.  One was offering "Snuggle Sacks".  I wasn't sure if my pack would actually snuggle in it but Sawyer is a burrower so I thought I would get it for the crate and then take it home to see the reaction.  Well, they love it!  I'm going back to the show briefly today and plan to get another one! 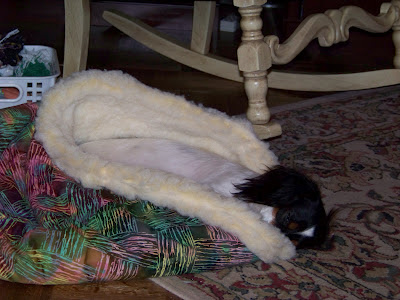 I did have to spray it with Bitter Apple because, as usual, they were chewing on it.  Usually the Bitter Apple is like a seasoning to them but it did stop them, at least for a while.  I will not leave it in the crate or with them when they are confined in the kitchen because there is some kind of metal wire inside the edge that helps to keep it open and I would not want them to chew through the sack and get whatever is inside!