Today is Bentley's Gotcha Day!  One year ago today I picked him up from Kelly and brought him home.  Poor little baby, I remember how bad I felt for him but he was so good on the ride home.  He only whined a few times and when he met his new playmates he was so excited.  Watching him grow up has been just as fun as it was with the other pups!  He has such a fun personality and is a handsome fella!  He also has such a loving face, sometimes he looks at me and I know he is saying "I Love You".
While he does good with the crate at night and when company is present he hates to be confined otherwise.  I've had to put a stand alone, vertical gate next to the tension gate on one end of the kitchen because he learned to climb over the tension gate.  Yes, he is an independent thinking dachshund.  He is not a napper, although I've noticed him napping a little more in the last few weeks.  He usually follows me around the house so I think of him as my little shadow.  I don't think of any of the dogs as being the leader of the pack, but he definitely has the "me first" attitude.
One of Bentley's favorite toys is "Foxy".  Foxy is one of those stuffingless toys with squeakers in either end (the dogs usually pull out the tail squeaker on these and I will quickly throw it away).  We have several versions of the toy but he absolute loves this one and usually has it close by.  Yesterday I threw it in the wash with their beds and even with it wet he carried it around.  Somehow he snuck it outside and I caught a shot of him enjoying the sun, with Foxy. 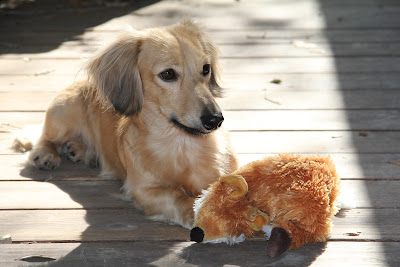 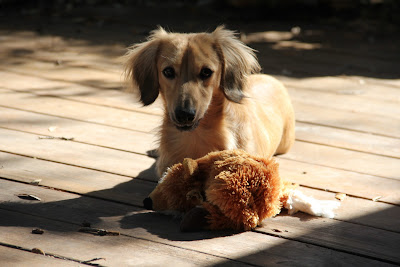 (Just to note, he was in the sun and appears to have white on his chest, but it is just the light.  He is not a dapple!)
Later I caught him napping with Foxy. 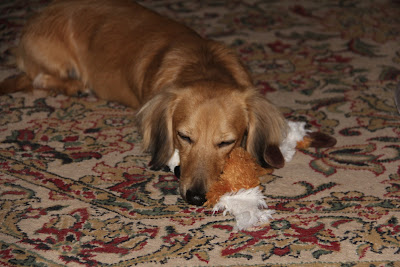