Bentley took to the show ring today, and did fairly well but no big wins.  He won his class because he was the only competitor! That's okay, we are just learning and having fun right now.  The show was in a show barn with a "packed dirt floor" and no heat.  Although it was raining and very muddy outside inside the temperature was comfortable.  But the packed dirt floor was interesting.  The ring was very bumpy so the walk was not as smooth as it is on concrete or a padded surface, and, of course, dirt was everywhere! Ugh, cough cough!  Fortunately for Bentley the dirt was light colored; several people commented that he was the perfect color dog for the dirt because it just blended right in with his fur! Unfortunately for me (and most everyone else) I was covered in a layer of light colored dirt, especially around my knees where Bentley kept jumping up on me!
I had bathed him last night, knowing that it was going to rain overnight.  I'm not a morning person and just couldn't stand the thought of trying to bathe a dog early on Saturday morning so I put him in the tub last night.  So this morning after he went outside I had to clean off his underside and his paws.  Then we drove north for the show and it was raining all the way up there.  Fortunately it had stopped by the time we got there but there was mud everywhere. So when I took him out for his go-potty break he got his underside dirty again.  Poor little guy, it is tough being so low to the ground and having to go outside to do your business!  The rain started up again, just as we were leaving so he was once again dirty underneath.  Fortunately I've learned to take along plenty of towels to clean up with and for riding in the car. 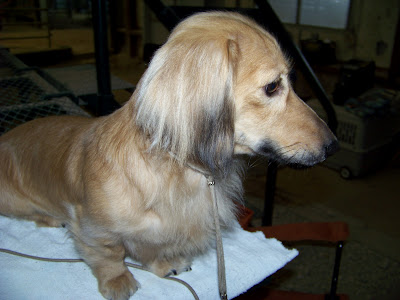